So, I've been debating with myself (great conversations, by the way) about the topic of my next post for a while now. "Jump and run simulation" seems to be the one that would naturally follow the forms of input I shared with you last time.

I recently published a Gamebook in Bulgarian called "Wimbledon", which puts the reader in the shoes of the Bulgarian tennis star Grigor Dimitrov. The success in the tournament depends entirely on the quality of the reader's decisions on and off the tennis court in a span of 10 years. There are a lot of difficult choices such as going back home for the parent's silver wedding, joining a training camp or flying out on vacation with the girlfriend (that happens to be Maria Sharapova). There are no wrong decisions in the beginning or the middle of the book, just different gains for the one of the protagonist's stats: Sport skills (speed and technique), Energy and Charm.

However, if I wanted to achieve success in giving the reader control over the outcome, there had to be some good vs bad choices at the end of the book. Some of them I created on the grounds of previous shell choice decisions through tactical (strategic) choices. Example: a choice was presented to the reader to decide between using more power or more technique during a match, where the success depends on the points accumulated for that specific skill. Others ones, I tried to implement in the form of multiple choice test, which was based on tennis theory. Unfortunately, something was till missing.

It is nearly impossible to convert a sport match into a written gamebook where we can't test the player's coordination and speed, skills so common for almost all videogames. I brainstormed for a while. I tried to recreate a tennis match situation through the writing rule "show, don't tell" and ask the reader which course of action he'd take. For an example: It is your lucky day and every shot you take lands exactly where you want it to go. Do you shoot for the back line behind your opponent (if you believe that a ball on the line still counts as a point for you) or do you prefer to send the ball safely into the opponent's half (if you believe that a ball on the line is considered out of the field)? And while that this is a valid approach and decision, it is boring as hell and I decided to leave it out.

The answer to that dilemma came to me out of nowhere, while driving my car on the highway two days later: The use of geometry through visual graphs and images. I kept the above question, but I gave it to the reader in the visual form to the right. The text in the book was formulated something like this: "You are just one point away from winning this game. The ball is coming your way and you have to decide quickly where you'd like to send it. If you want to direct to ball to position 1, go to...; If you opt out for 2, go to... and if you'd like to send it to 3, go to..."

I don't think that I have to tell anybody who's ever watched tennis, which one is the correct answer here. Just for the record, making the wrong decision didn't lead to losing the game. Instead, points of Energy were used to win this match. So, the people guessed right, simply saved the Energy for use in later situations. 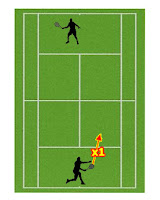 Similarly to that, there was another choice, much later in the game and therefore a little bit more difficult. I used the graph to the left with the following question: "You are just a point away from winning your game against Rafa Nadal. The ball is coming your way and you know that if you hit it with the exact power required, the win is yours. If we assume that it takes power = 1 for the ball to travel the distance shown as x1 in the graph to the left, how much harder do you think you have to swing the racket to score this point? If you hit the ball twice as hard, go to...; If you swing 3 times as hard, go to...; If you put 4 times more power, go to... If you believe that 5 is the right answer, go to..." 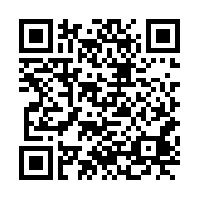 For those of you, who'd like to see the right answer, use the following link: http://augmentedrealityadventure.com/bg/wimbledon2.htm or scan the qr code on the right (yes, I had the QR code option printed in the gamebook).


See how I simulated a very dynamic sport in the form of text and I put it in a gamebook? I think that this was an ingenious decision (I always take pride in being this humble) and I thought that it was worth sharing with the international gamebook community. I hope that this idea would seem progressive and easy to use for the rest of the game designers in the interactive storytelling genre.

As always, there is a downside of using this approach and it is that it requires some basic knowledge in Photoshop. However, I believe that this minor problem is very easy to overcome through some dedication and time spent on the Internet.

I am now in the process of planning a gamebook on the subject of soccer. Something like a gamebook clone of New Star Soccer and I have a very good feeling that it is going to turn out great.

Before I finish, here is another graph I used in the gamebook Wimbledon. 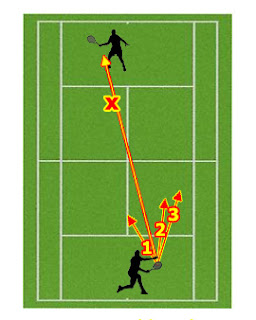 If we assume that the power and therefore the distance traveled would be the same as in shot "X", do you want to chose direction 1, 2 or 3? The answer is here: http://augmentedrealityadventure.com/bg/wimbledon1.htm

And another one from my gamebook "Area 51": 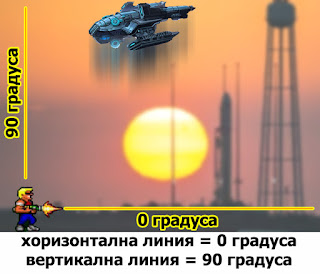 If we assume that the horizontal laser trajectory equals 0 degrees and the vertical one equals 90 degrees, under what angle do you want to shoot in order to take down the alien spaceship? Write down your best guess on a piece of paper and click here to find out if you succeeded: http://augmentedrealityadventure.com/bg/Area51.htm