I never wanted to write a series of posts on what not to do in a gamebook, because there is so much already published on the subject. As you can see from my earlier articles, I am trying to focus on how to do things right. So, to keep true to myself, in the following few posts, I am going to lay down the problems and come up with possible solutions. 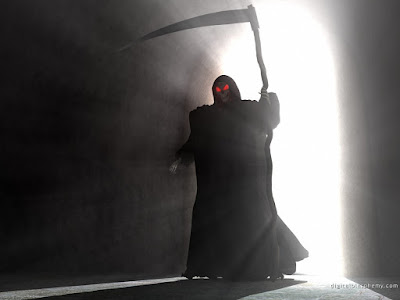 Not the worst, but definitely the most common mistake a gamebook author could make is the use of instant death in his/her adventures. Think about it logically for a moment! In a videogame, an instant death is a PUNISHMENT that FORCES the player to start over from the beginning. A gamebook can't force the reader to do that. What it does instead is, it encourages the readers to cheat. Let's be honest for a moment! How many times have you started over after your protagonist was killed? Most of the time (read this as all the time), the reader would simply go back to the previous paragraph and would make a different choice.

See, the great paradox, in the genre of gamebook adventures, is that the punishment of taking away an item or lowering a stat is more significant than the capitol punishment of instant death as the latter brings no consequences at all. Killing the protagonist accomplishes absolutely nothing except killing the enthusiasm of the reader by FORCING him to cheat.

Don't get me wrong! All of us, gamebook authors, feel the urge to kill the protagonist once in a while. I blame that on our need to provide the readers with some meaningful feedback when they make a significant mistake.

However, please note that there are some better ways of forcing negative consequences. The following punishments are not only more meaningful form of feedback, but they also make cheating a little bit more difficult than going back to the previous paragraph.

1. Killing me softly: take stat points away - this is the most commonly used mechanic in gamebooks. It is also the most effective one. Psychologically, it is less painful when health, life or blood points are taken away gradually. Also, going back to the previous paragraph doesn't solve the mistakes made earlier in the adventure. Taking away stat points makes it more likely for your readers to be willing to go all the way back to the beginning, and having already learned from their previous mistakes, they can make better choices at the next attempt. This is also the most consistent mechanic with the brothers of the videogame genre, where multiple lives are given to the players, so they don't have to start over after every single mistake.

2. Emotional Loss: losing an item or a companion - losing something always hurts, especially if you have an emotional attachment to it. Make an item very difficult to get and watch how readers would hate losing it or make a friend character very likable and see how painful it would be to see him/her die or walk away! Sometimes, parting with an item could have more than just emotional consequences. That could make success in the adventure impossible, if the reader doesn't find a way to get it back. A great example of losing a friend is "The Last Fortress" by Ashton Saylor, where your personal guard saves your life at the expense of his own (only once during the adventure).

3. God's Forgiveness: give the reader a way out of his hopeless situation - sometimes, just sometimes, if the mistake is too great, we can't simply take away some item or a few stat points. It would be silly to tell the reader that they have to subtract 5 points from their stamina skill, because they took cover under a tree, which gets hit by a lightning. Similarly, we can't tell the reader that they slipped on ice in the mountain and fell down a few thousand feet, just to lose their weapon during the fall. In situations like those, apply the God's Forgiveness rule and ask your reader to roll the dice. If they get 2-4, the protagonist dies, but if they roll 5-12, the lightning strikes somewhere else or instead of falling to their death, they slip and drop a very important item. The stress invoked by the possibility of instant death communicates a very strong message about unsatisfactory performance, it increases the tension, but it also gives a "get out of jail" card at the same time. You could even allow your readers to re-roll the dice under certain conditions. For an example, give them a blessing stat. It could be increased based on good performance during the adventure (a monk could bless the reader for helping with something) and when a bad dice roll happens, re-rolling could be allowed at the expense of one blessing point. All of a sudden, the chance of instant death decreases tremendously, but the illusion of danger is still there.

Remember! The paradox is that an instant death is no punishment. The reader simply goes back to the previous paragraph and makes another choice. In result, the protagonist suffers absolutely no consequences and the reader is pretty much forced to cheat.

At the same time, adjusting stat points is a great form of feedback in the genre of gamebook adventures. And most gamebooks suffer from absence of feedback altogether. Adjust the stats during the adventure as much as possible!

Conclusion: It is the author's job to cheat death, so the readers can fully immerse in the story enjoy the adventure.

And finally, don't worry about cheaters! They will always cheat. Our mission as gamebook authors is to save the honest readers from the urge for cheating. The other ones are a lost cause anyway.

Peter Agapov
Game Designer at AugmentedRealityAdventure.com
President and Chief Executive Officer of American Limo Naperville
Former Road Captain of Marine One at Operation "Welcome You Home"
Posted by Peter Agapov at 3:51 AM No comments: