Something's up in the Land of Destiny Quest 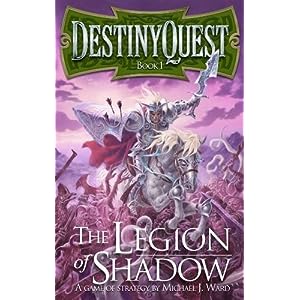 So I was looking up Destiny Quest on Amazon to see how many people had found my review of this great gamebook helpful (incidently, it was 3 out of 4 but that's not the big thing here.)

The interesting thing is that if you search for DestinyQuest on Amazon, you will get more than The Legion of Shadow, released Feb 2010.

You also get The Legion of Shadow to be released on March 2012.

So there's a second edition coming out?  What could this mean?

Michael has said in an interview that he originally wanted Destiny Quest to be a four act book.  He has also posted new quests on his website as a kind of expansion pack.  Is Michael deciding to put all of these extra materials into one big bumper gamebook?

This is great news.  Destiny Quest has received rave reviews (see below) from many blogs and magazines, including this one and this is a sign that there is loads more good stuff to come.

So we have something to look forward.  At the moment, we can only speculate about what is to come...

Here are some reviews of Destiny Quest:

Here are some interviews with Michael J. Ward, creator of Destiny Quest:

I have become so excited by it, that I have made a vlog about it too: