Quest for the Aubern Pelt review

I was intoduced to this one page gamebook (which you can download from Demian's page on it) by Jake Care on his post about one page gamebooks.  After playing his enjoyable little gamebook, I went over to the page and downloaded the images to give the gamebook a go.  Despite being on two sides of A4 (or possibly because of being on two sides of A4 - as Mark Rosewater says, restrictions breed creativity), the gamebook contains a lot of innovative elements that provide the player with lots of choice.

The one page adventure is available for free as two image downloads from Demian's gamebook page on it, so have a go at it before reading the review.

Since the authors had to fit a whole adventure onto one page, something had to give and so the background is rather light.  However, they devote 1/6 of the adventure to it.  A selkie has had her pelt stolen from her by a sidhe and she cannot live beneath the waves without it.  It is up to you to enter a dungeon full of Sidhe and get the pelt back.  Pretty straightforward but it's pretty good for 1/3 of an A4 side of paper. 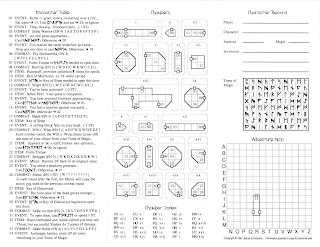 There is only one actual illustration to the one page gamebook and that is a drawing of the back of a lovely young woman who appears to have nothing but an otter to cover her up.  The authors, however, make good use of pictures in their rules systems.  You have to draw yourself a map of the dungeon using the diagrams provided which, whilst not too pretty, seem to make a which door choice a bit more entertaining, especially as you know that there will be a room behind the door and not a deadly booby trap.  The combat system is also shown using a picture, listing all the manoveres you can make and whether they are offensive or defensive.  Also, instead of getting a list of spells, you are given a grid of runes which make up spells that you can cast in the book.  As you use the runes, you cross them off from your grid.  An inspired idea.

They say a picture paints a thousand words and this certainly rings true when writing a one page gamebook.  With an innovative use of pictures, the authors have come up with a magic system, a mapping system and a complex combat system on two sides of A4 and still have room for a bit of nudity too.  A lot of ful length gamebooks could only boast one of those things. 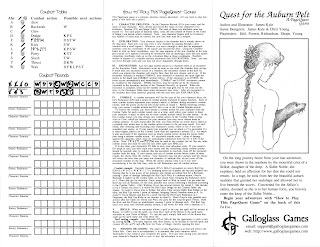 Once again, James and Chris have managed to pack a lot of choices into two sides of A4.  The use of the map means that the gamebook is very free roaming.  The book also has 34 paragraphs which also offer lots of choices.  You can cast a spell or fight a monster.  Do you eat the gruel or use up runes to cast a spell on it first?

The gamebook also offers you interesting puzzles with combat.  In combat, you have a choice of actions that you can take which are ranked in order of power.  For example, backstab is the most powerful attack mode and dodging is the most powerful defence option that you have (monsters have alert which is more powerful).  After you have made an action, you have a limited choice of actions that you can take in the next round depending on what you did.  So for example, if you chose to backstab the monster in round 1, then you have to wait in round 2 which is the weakest action to take.

The puzzle comes from the fact that you are given all of the monster's manouvers so you need to work oout the sequence of manouvers that will kill the monster and cause you the least damage or you could fight defensively until the monster runs out of manouvers and so it flees (very useful of you enounter a monster in a dead end that you don't have to kill).  The combat system also incorporates the magic system by having two spells that you can cast as your actions.  I enjoyed working out which actions to take in the combat system, especially agaisnt the mimc which takes whatever action you took in the last round.  Try and work that one out!

This, along with the theme are the two things that were cut to fit the adventure into two sides of A4.  After the introductory paragraph and the rules, you get very little description of the dungeon.  The paragraphs on the encounter table aren't written in full sentences and the adventure doesn't even describe what a sidhe or a selkie is (although they are mythological creatures so you could look them up) and it does not describe the effects of the spells you are casting.  Much like the Take That You Fiend spell in Tunnels and Trolls, you have to imagine how the defensive combat spell defends you and why casting a spell lets you avoid combat (is it invisibility, or does it grant speed to help you run away or does it teleport the monster away?  It's up to you).  I suppose you could write your own narrative of what happened if that's what you're into.

As I've stated in gameplay, this adventure has fitted in a combat system, spell system and way of exploring a dungeon, all on two sides of A4.  There is also a character creation system where you distribute 10 points between magic and stamina and cross of a rune for each stamina point you take.  However magic points aren't used in the adventure and I never ran out of runes, so I guess a stamina of 10 is best.  Whether this was an error or that magic would have been used in later adventures, I'm not sure.  The rune system is also slightly inconvenient as runes are randomly placed on a grid.  It may have been clearer to have a tally for each rune which would save me having to hunt around to make sure I have all the runes I need.

However, these are minor niggles in an excellent and innovative rule system that covers less than two sides of A4 paper.

This is a great adventure and a good education for someone who wants to push the boundaries of solo gamebooks whilst simultaneously saving space.  Yes, the score is mediocre, but lets remember that this adventure covers 2 sides of A4 paper.  It lost points on exposition and background because the authors had to cut something and these are two things that the players could provide themselves if they wanted.  A great little adventure.  I would like to see more in this style.