Way of the Tiger Kickstarter has begun 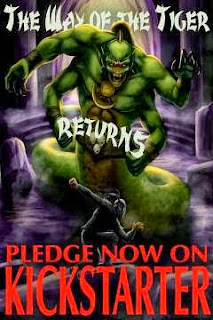 Good day to you all gamebookers!  These days, it's rare that I do another post outside of the weekly Sunday one (lots of stuff going on in real life now and also lots of writing/editing), but we have experienced such a momentous occassion, that I must blog.

The Way of the Tiger kickstarter has begun early!

I think Way of the Tiger is amazing.  I reviewed the first two gamebooks on the Lone Tiger Gamebook blog (which has gone a bit quiet).  You can find the review for Avenger! and Assassin! there.  The other books keep the series fresh by taking a new twist on the gameplay - you go from going on a mission to assassinate some bad guys to the ruler of a city.

There were six books released in total.  Book six ended on a cliffhanger with you trapped in a giant spider's web, which has left fans disgruntled for years.  However, we now have the chance to redress that - with enough money, book 7 will be released!

There is also a prequel book called Ninja!  to be released, written by my good friend, David Walters.  I'm really looking forward to reading that :)

So have a look at the Kickstarter page!  You can get pdfs of the prequel and book 7 for a mere $30 and whilst the print books are ezpensive, Megara produces gorgeous, high quality books with fantastic illustrations.  As someone who owns a copy of Arcana Agency, I can really see the love that they have put into their presentation.

So go to the Kickstarter page and lets stretch goal this so much, they will have enough money to make another eight books.

Here is the Way of The Tiger Kickstarter page.
Posted by Stuart Lloyd at 7:40 PM