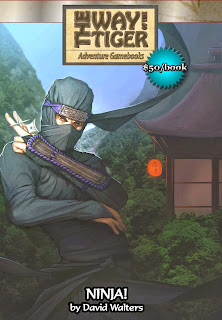 Hello, gamebookers!  I'm excited to be giving you this weeks blog post, because my good friend David Walters has given me a sneak peak of Ninja!, the new Way of the Tiger prequel.  As we all know, there is a Kickstarter going on to bring Way of the Tiger back.  The Kickstarter is on almost $32000 and it reached its target within 24 hours of being launched; however, there are plenty of great stretch goals in $5000 increments and there are 6 days left (at time of publishing) to make your pledge.  I for one would like to hit the $50000 stretch goal where the series gets keywords.  That would tighten up the gameplay here, but that's just me.  You want to hear what Ninja! is about, don't you.

Ninja! is definitely an excellent addition to the series and it's not just because the title is a noun with an exclamation point after it, like all of the other books.  The prequel fits in very well.

Here is the story:  the events of this book take place before the scrolls have been stolen after the scrolls have been stolen, but before you set out to get them back.  You and four other Kwon worshipers (a mixture of monks and ninjas) go to the Island of Plenty in order to complete a series of tests and become a grand master.  These tests involve infiltrating certain buildings and stealing flags.  You have to do this twice.  This is not particularly difficult in itself - the trick is competing against your fellow students.

However, as it turns out, this will be no simple contest.  As soon as you land, it turns out that the place where the first flag is held has been taken over by ronin.  I don't want to spoil the rest of the book, but let's just say that it doesn't get any better for a heroes there - it gets a lot worse.  There is a mystery at the heart of the book - someone is trying to kill off all the Kwon worshippers and it is up to you and your four companions to find out who and stop them. 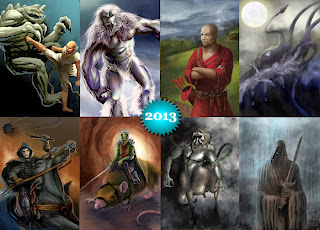 David has done a great job in tying this prequel into the rest of the series.  It is a difficult thing to do as there are six books worth of events that David can't tamper with by introducing a character too early.  However, he still manages to find some familiar faces, such as Gorobei and the Monks of the Scarlet Mantis.  The characters in your book are well written and thought out - upon learning of these attempts on your life, your character blames Yaemon, which is understandable, considering that he killed your step father.  There is also a difference in attitude between the monks and the ninjas which demonstrates their different approach.

David has also done fun stuff with the combat system.  The Way of the Tiger system is simple yet utilises a range of options that people might forget about.  There are combats where you need to use your inner strength to increase the damage you deal as you only have a certain number of rounds.  There is a combat where blocking is useful.  There are combats where you can use shuriken and poison needles and there is also a combat where you have to use nothing but throws.  David has really pushed the boundaries of the system.

So Ninja!  will make an awesome addition to the series.  And you can get it if you pledge on the Kickstarter.

$15 will get you the pdf of Ninja, but you could also get the beautiful hard back books that Megara is famous for.