Hello, gamebookers! I will be bringing you Windhammer reviews, but not today.  however, if you want some Windhammer reviews, Brewin' (author of Infinite Universe) is writing in depth reviews over on his blog  and the Crumbly Head Games blog has a review of every Windhammer book.

Today, I'll be writing about another gamebook that will be hitting the shelves soon.  This is Journey to Mount Darkness, by JP Barnett who has written Invitation to a Feast.  Journey to Mount Darkness takes place in the woodland Forest Chronicles universe - a place where The Noble Ranger looks after many woodland creatures, such as rabbits, owls and dogs and where the Dark Panther leads evil creatures such as Darkness Wolves to kill the good creatures. 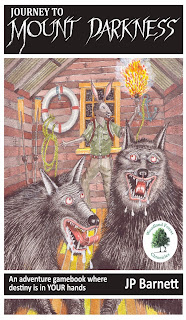 Whereas in Invitation to a Feast, you played Jumpster Hopper, a young rabbit whose aim was trying to get to a feast, in Journey to Mount Darkness, you play Theodore Hopper, Jumpster's dad, who is tasked with an important task which requires a longer and more perilous journey.

His journey involves Mount Darkness which is a mountain in the centre of the Woodland Forest.  As its name suggests, all kinds of nasty things live there, and if nice creatures on one side of the forest want to visit their friends, they have to spend ages travelling around the mountain. However, one day, the Noble ranger mined a tunnel through the mountain and lit five special torches that kept the tunnel lit all the time.  This scared off the nasty creatures and provided a safe quick route through the mountain.However, on one fateful day, the lights went out.  It is now Theodore's quest to relight them.

This first book in a four part series takes you from Theodore's home to just outside Mount Darkness.  There are two main routes through the book; one is harder than the other (but it may be more reqarding), and this offers some replayability.

One of the great strengths of the book lies in the world that JP Barnett has crafted.  Along the way, you will meet several types of animals and they all have special characteristics and you learn how they fit into the Woodland Forest community and whether they serve the Noble Ranger or the Dark Panther - there are fox archers (bad), sneaky weasels (bad, but some can be good), noble deer (good), wise owls (good), ranger dogs (good) and many others, including some animals that were in Invitation to a Feast.

There is no system for combat, but there is a system for pursuit - you are usually running away from things, or, in some cases, chasing things.  This fits in with your character being a rabbit and also the mentality of the Noble Ranger who does not seem like the kind of guy who supports killing.  However, there are other ways of getting out of trouble. 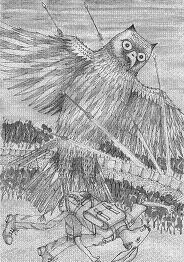 The whole series has an epic feel to it and there are some good scenes, especially at the end when you have to get past a horde of fox archers with the help of an owl friend; and the chase situations can be quite gripping.

Aimed for younger readers, this is not your traditional dungeon crawl gamebook, and it is not full of battles with various monsters, but it is still gripping and it sets up the main bad guys quite well.  You don't see them in this book, but there is plenty of talk about them and it sets itself up for book 2 very well.  So why not give it a go?

To buy Journey to Mount Darkness, go here, where the website is having paypal features added.  When they have been added, you will be able to order a copy.  If you are interested, you can email JP Barnett here and he will notify you when the website has been updated.
Posted by Stuart Lloyd at 8:38 PM