Vault of the Vampire playthrough

Vault of the Vampire was the first Fighting Fantasy book I ever played. The very first. For a lot of people, their first would be an iconic one like Warlock of Firetop Mountain or Deathtrap Dungeon, but mine was a far more humble one. And it's one I love the most.

I can still remember borrowing it from the local library, utterly entranced with the cover's vampire. Always loved vampires. And the terrifying visage of Count Reiner Heinrich (which has become less terrifying over the years) just leapt right into my imagination.

The interior artwork in this book is without a doubt my fave in the entire series. The dark gloom of the castle is amazing, and all of the villanous monsters look genuinely creepy. So let's get stuck in.

My stat rolls were pretty good to start with, although my luck and faith were rather low. Never mind though. You start out in a town in distant not-Transylvania, where an old woman begs you to rescue a girl who has been kidnapped by the evil count. Before you can even leave on the journey, you encounter the count's coachman, who becons you over. But he doesn't speak - indeed, how can he? HE HAS NO HEAD!! Damn, I love that bit.

As a kid, I would normally just ride along with the fiend in his carriage, but this time I thought I would take a bit of a trek through the forest. This wasn't that great an idea though, because the moment I stepped into the forest, a forest ranger shot me with an arrow. I suppose it was a mistake to wear my 'deer costume' on that day. Anyway, to make up for it, she convinces a rather suspicious gnome to take me across the river in his boat for free.

From there it was only a short trek to the castle, through swirling mist. Along the way, a nice old man told me who I could trust in the castle, which is always useful to know, although it pretty much came down to "Trust the person who doesn't try to either kill you, or put magic spells on you." He also gave me some garlic, and insisted I wear it around my neck. Which would make more sense if anyone had even mentioned that the count was a vampire at this point - but they hadn't, so I was walking around with garlic hanging from my neck like a mad person.

Anyway, upon getting into the castle, I ran into a door at random and was immediately beset my zombies, who I ran away from. I climbed up a tower, and upon trying to enter the topmost room, was beset by bats. I failed my luck roll and had to flee the room, and was then given the chance of going back into the room. Tried again, failed my roll, ran away. Tried again, suceeded, and walked right on in. Yay for playing with the loops in the gameplay!

In the tall tower, I found a silver bell. When I struck the bell, the ghost of a paladin materialised and told me where I could find a magic sword. Satisfied with that, I tried to enter the crypt, only to be attacked by a shadow monster - which I could easily dispatch with the magic sword. I suspect that this sword is pretty much vital at this stage of the game, and I can imagine you'd wind up very dead without it.

Entering the main house of the castle, I ran into a bit of a problem - none of the doors have any name plates. It became very difficult to navigate my way around, and I suspect that I'd probably need to map the entire place. I'd had two cans of cider at this point, so I really didn't feel like making any damn maps. I will trust in my impressive faith score to guide me... yeah, so I got lost.

I somehow stumbled into a Doktor's office, where the Doktor told me (for the price of all my remaining gold) that the count kept the keys to the crypt in his bedroom. As I left his office, I fought a couple of zombies who just happened to be lounging around in the hallway, and continued on my way.

I've no idea what the correct layout for this part of the castle is, but I entered three important rooms. In one room, the count's sister asked me to kill someone, and when I refused, she tried to put a spell on me. She didn't suceed, so I fled the room. Yeah, she's a nice lady. If I remember right, she turned out to be the main villain of the book, too. Despite her description and picture, I can't help but imagine her as being a slightly crazier version of Elizabeth Bathory. Who, by the way, was also the host of the vhs board game 'Atmosfear 4', called 'Nightmare' in the US. Now that was a very strange game. 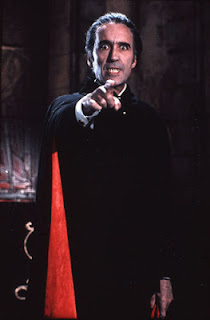 I fled that room, and the next room I tried contained something even worse than Elizabeth Bathory - a dodgy looking spider. It was so terrifying that the book insisted I choose another room. Uh, right. In the next room, I met the Castellan of the castle, who gave me his keys and a stake coated with silver. Why was it coated with silver? Just to make sure that the count isn't a werewolf too, of course. Hey, it could happen.

I was feeling so confident at this point. My health was high, although I was out of meals. I'd had some very fortunate rolls, and my faith had increased. I hadn't gained any afflictions (curses or mystical poisons that might affect you during the game), so I was in high spirits. I eventually found my way into the count's chambers, where I was beset by a vampire bat and... a vampiric weasil! Yeah, you might laugh at the idea, but that weasil actually did a bunch of damage to me. The bat itself was easily dispatched, but that damn weasil kept biting me. Don't trust weasils, guys. Especially vampire ones.

Entering the count's sleeping chambers, I was able to smash his coffin to pieces and rob him of the keys to the crypt. It was at this point that I ran into the Spectre, who I was able to defeat, but not without losing half my remaining health. It was a very tough fight. "Right," I said to myself, "All I have to do now is get out of this part of the castle, and I'm sure I'll find health potions or food somewhere before I die."

Yeah, great idea. The book then asked me "Have you fought a Minor Thassalos yet?" No, I had not. "Well," said the book, "Now you're gonna!"

First, it shot me with its eye lasers before the fight began. Then during the fight, it kept on shooting me with eye lasers - and would not stop. Sure enough, it killed me. And this is a MINOR Thassalos. I assume that the MAJOR Thassalos doesn't even fight you - it just looks at you, and your head melts as if you'd opened the arc of the covenant.

So yeah, I've now played through three of the books, and have beaten a grand total of none of them. Woo, go me!

In the interest of being totally fair and unbiased, I'll say that this book has several flaws, namely that it's so difficult to navigate inside the castle. A map will definitely help you out. But even despite that, it's so full of interesting characters and the descriptions are so vivid that it's a great read. The combat ramps up from easy at the start to get more and more difficult, so it doesn't feel cheap even when a Thassalos is shooting you with omega beams. I'd rate this book higher than Bloodbones (my previous playthrough, scroll down if you've not had the chance to see it yet) due to its sheer nostalgia factor and its strong atmosphere. It's definitely one of my favorite FF books, and one I'm glad I got the chance to play again!

And what of the foul Count Reiner Heinrich? He later rises from the dead (again) in the sequel to this adventure 'Revenge of the Vampire'. I had that book as well when I was a kid, and remember that due to an error in the printing, I wasn't able to finish it. Fantastic. We'll see how that one goes if I'm ever able to find another copy of it. I'm not too sure which one to try playing next, guess we'll find out soon enough!
Posted by Zanafarr at 9:00 AM