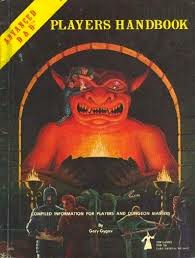 Hello,  gamebookers!  Lovely to see you again.  Today, I'll take about my thoughts after perusing the ADD
Player's Handbook recently and also my memories of reading the AdD Dungeon Master's Guide (which was in my school library).

The Dungeon Master's Guide was the first RPG book that I read, and it blew my mind, partially because I had no idea what the spells mentioned in the magic items section meant.  However, I still loved every bit of it.

Of course, ADD is one of the biggest RPGs of its time, and there is a wide range of treasure to obtain and monsters to destroy, and each of these requires a whole host of stats to think about.  Back in the 70s, it must have been a huge job to juggle so many numbers without computers or a Dungeons and Dragons wiki to base your RPG stuff on.  But somehow they did it, although some of the results to me seem a bit weird.

I would like to know what the creators of DnD were thinking when they created the classes - were they based on any historical information?  Fantasy writing?  The need for a particular gap to fill in game terms?  For example, why must druids have to beat a higher level druid in combat to get to level 12?  There are only 9 level 12 druids apparently, but is that in the country?  The world?  The universe?  Why must clerics only use blunt weapons?  Why do illusionists get their own special class, when the other schools don't? 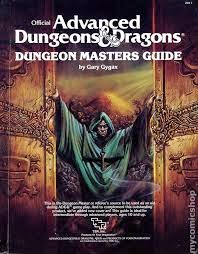 And then we get to the numbers and the tables. Oh, my the numbers and the tables - from the thief skills table (why are thieves so good at climbing walls but relatively terrible at everything else?) to the psionic powers table (which has a base 1% chance of being needed for characters who have an intelligence, wisdom or charisma score of 16 or over) to the probability tables in the Contact other Place spell (which plane am I going to?  Now, will I go insane?  Will I get knowledge?  Will I get veracity?).  What I want to know is whether these numbers were carefully tested with some purpose in the game, or were they just added because they 'feel right'.  There seems to be so many numbers and no logic to how they seem to have been determined.  Also there does not seem to be any reason behind several of the stats in the game.  Why do monks go to level 17?  Why do fighters go up to level 11?

I remember reading the Dungeon Master's Guide a few years ago and the magic items were equally random.  There was a brooch that could protect you from 101 points of magic missile damage.  Why 101?  There were two magic bags (I can't remember which ones) where if you put one in the other, there was a chance that it opened up a dimensional portal, or stopped them both working, depending on which one you had put in which. 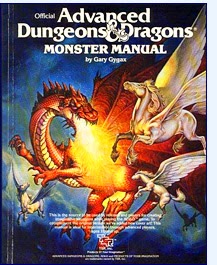 On the one hand, this is quite complex and there is no easy way to remember any of this.  On the other hand,
it does open up some fun options.  If the system is too simple, then characters would all be too similar and if magic items worked predictably, they would lose some of their magical feeling and seem more like tools.  It would be interesting to engage a fighter in combat, only to discover that they have psychic powers too.  You wouldn't see that coming, because psychic powers are so rare, you wouldn't assume that anyone would have them.  I would like to be able to insert a little randomness into gamebooks, but I need to strike a balance between variety and the tedium of unnesessary dice rolling.  For example, the critical hit rule in AFF (that you score more damage on the roll of a double 6) would be a good example of adding a bit of variety and it has the bonus of being applied to die rolls that you are doing already and having a good effect.  I think having to roll 2 dice with the reason to see if you roll a double 6 is a bit much, however.  Having these random events happen are better when applied to die rolls that you have to make anyway (like critical hits).  I have to work out if the effort of rolling a die and referencing a table will be worth the consequences of doing so.  Rolling 2d6 only for nothing to happen on a 2-11 will probably just be annoying.  Also, in the case of a random encounter, the combat has to be a sufficient threat.  Fighting a mad pilgrim in Fabled Lands 1 might be a challenge to a rank 1 character, but a rank 4 character returning to their house in Yellowport after their adventures on the Violet Ocean might just find it tedious.  Working it out can only be done with practice.  I'd better get on it then.
Posted by Stuart Lloyd at 8:33 PM