A couple of months ago, Netflix advertised their first release of an interactive movie. Shortly after, news started emerging in the global media about "Choose You Own Adventure" suing Netflix over the branching format. Here is an article published by USA Today: 'Choose Your Own Adventure' publisher sues Netflix over 'Black Mirror: Bandersnatch' 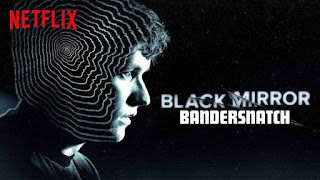 How does this affect our beloved gamebook genre? Lets take a look and give it a thought!

First, I will give you my personal opinion about the Netflix Original movie "Black Mirror: Bandersnatch". It tells the story of a young game designer in the 1980s, who is creating a video game based on a gamebook. It has a great potential and a very promising beginning. It starts with the young programmer being invited to work at a professional video game publisher, where he meets one of his personal idols in the industry. Naturally, one of the first choices you have to make for the protagonist is: "Do you wish to work on the game at the office" or "Do you prefer to work on your project by yourself at home"?

If the choice, presented this way, seems completely blind to you, don't worry! That is exactly how I felt when I saw it on the screen for the first time and I had very limited time to make a decision. Thinking logically, I assumed that working at the office provided advantages such as access to unlimited professional resources, cutting edge technology and help from experienced game designers. Well, with a lot of creativity, the makers of the movie were able to trash this assumption. Sadly, the nonsense didn't end with this one. Instead, it gets from bad to worse further in the story. Because of all that, a movie couldn't possibly be more similar to "Choose Your Own Adventure" than this. All the illogical choices and blind guessing, the endless "try again" sequences and the whole arcade approach, forced me to give up at some point. The story also got weirder later on, but I guess that is to be expected with any "Black Mirror" production. Needless to say, I was extremely disappointed.

Because of how bad it is, the owner of "Choose Your Own Adventure" brand (ChooseCo LLC) probably has a good reason to sue Netflix over the branching narrative and horrible choices. However, poor gamebook design is not difficult to find and I would be hesitant to give reserved rights of it to just one game designer. 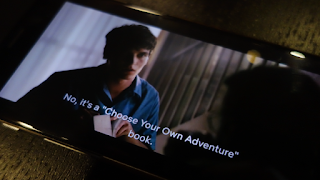 Joking aside, I heard a lot of chatter that ChooseCo is focusing on suing people and companies left and right for just mentioning the CYOA brand. It seems that the people, who inherited rights over the iconic series don't care to publish something new with better quality, but instead they are putting all their effort into making money by harassing new gamebook authors.

This could play out in two different ways. As most intellectual property lawsuits, this one could be considered more expensive to fight in front of a jury and Netflix could decide to settle outside of court for the small amount of a few million dollars. However, if the online streaming service has any intentions to continue publishing movies with similar format, they wouldn't care about the cost of winning this battle and would want to set a precedent in court, teaching ChooseCo a good lesson that it is not okay to pursue branching narrative game designers for mentioning "Choose Your Own Adventure" and comparing their products to it. The statement "My car is NOT a Mercedes, but looks like one" doesn't infringe the brand Daimler-Benz in any way. The folks at Hyundai know that very well.

If the big shots at Netflix decide to follow the latter approach and take the ChooseCo accusations to court, they would do the world a log of good by releasing the authors of gamebooks from the fear of being sued over the branching narrative format or comparing it to the world-famous series.

Either way, it is good for the whole genre that this scandal is being monitored by news media around the globe, reminding people about the good old gamebooks and of something that was once a worldwide phenomenon. Hopefully all this fuss is going to create a fresh new interest in our beloved genre.

I would like to end this post with the bold statement that books from the "Choose Your Own Adventure" series shouldn't be called gamebooks at all. Branching the narrative creates options, but it doesn't create meaningful choices and therefore, those books have nothing to do with real games. However, more on that next month here on lloydofgamebooks.com in a post which will be called "Gamebook Theory: Grave mistake #4 (branching the story is not enough)".


Until then,
May The Dice Be With You!