A table of probabilities

Just a quick post to give the percentage probabilities of winning, drawing or losing an attack round depending on the difference between your skill and the skill of your opponents.

If you want more info on how I calculated this, look at the explanation under the table.

Skill difference: If you subtracted your opponent's skill from your skill, this is the skill difference. I have done it from +6 to -6. any bigger than that and I wouldn't bother rolling dice.

% chance to win, draw or lose: Self explanatory.

If the probabilities do not add up to 100, it is because of rounding.

Of course, these values do not take into account special combat rules.

For example, in Slaves of the Abyss, you automatically kill an opponent if you roll a double 6 (you have a 1/36 chance of winning automatically).

I also haven't calculated the probabilities of rolling 3 dice and taking the best 2 which occurs in Legend of Zagor. 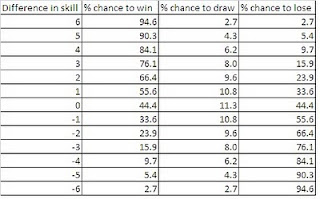 Hope this helps in some way. In the next few days, I'll post about the good points of having dice in gamebooks.

Have a look at Fighting Fantazine (http://fightingfantazine.bravehost.com/Fighting%20Fantazine.html). Issue 4 is coming out soon and I am writing an essay for issue 5 on a particular Fighting Fantasy book on why it is so great. However, I acn't say which one. You will have to wait until issue 5!

How did I work it out?

Quick maths lesson - to express something as a probabiliy, you put it in square brackets. For example, the probability of rolling a 2 can be written as [rolling 2]

For example, if your skill difference is 0, the sum is:

If your skill difference is -6, the sum is:


To get a draw I took the sum of the probabilities of rolling numbers where the attack strength was equal.

Once I had calculated the % probabilities of getting a win or a draw, I did the sum 100-[win or draw] to get the probability of losing in %.
Posted by Stuart Lloyd at 6:35 PM