So that is the end of the April challenge.  I enjoyed it immensely and I hope you did too.  I'd like to thank Tossing It Out for coming up with this great idea and organising it.  I'd like to do it next year on a different theme.

I'm glad that I did it.  I have discovered a lot of great blogs that I wouldn't have found otherwise and I shall be following them with interest from now on.

I have learnt a lot from making these blogs.  First of all, I have had a good analysis of what makes a good villain.  Villains seem to be integral to a story, sometimes even more so that heroes.

Villains also seem to hold an attraction with others.  Many other blogs have focused on villains or named villains as part of their posts such as:

Also, Jonathan Green has written numerous posts with villains as the theme:

Guess the Villain ( where Jonathan has made a lego version of one of his villains)
Lego Fighting Fantasy Villains (where Jonathan gives you step by step instructions on how to make your own lego Belgaroth).
Of course, there were probably posts about heroes too.  I don't know who would get more posts about them - heroes or villains?
But enough with the analysis.  Here's the final ranking of the villains and next week, I will write about what I have learnt makes a good villain.
So without further ado, here are the rankings for the April A to Z League of Gamebook Villains... 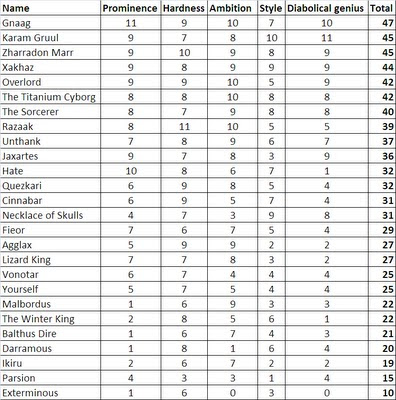 So there we have it!  Gnaag is the best (worst?) villain out of the 26 villains we profiled.  This is due to the fact that he was a constant thorn in the side to Lone Wolf over several books, managed to conquer most of Northern Magnamund and kept control over the other Darklords who are a violent backstabbing bunch at the best of times.  Congratulations!
Karam Gruul and Zharadon Marr share the runner up prizes for their efforts.  They were pipped at the post because of their lack of ambition and for not being as prominent as Gnaag.  Better luck next time, guys.

Not surprisingly, most of the bottom rankings are held by servants and henchmen who, by definition of their roles scored very low on ambition.  Most of them also scored low on prominence because they were hardly in the book apart from the scene where you kill them.  However, my sympathies to poor Ikiru for scoring lower than Darramous.  He must be sulking in his pit right now.

Next week, I'll go over what makes a good villain from what I've learnt about this lot.  But for now it's...

On the other hand, there are plenty of other gamebook villains that I haven't covered purely because their name starts with a popular letter of the alphabet, so I will be doing more villain posts in the future.  If you have any suggestions for villains, please leave a comment.
Onwards to May.  Arion games is releasing Advanced Fighting Fantasy 2nd Edition.  I've pre ordered my copy and I will do a review on it at some point, probably in late June as May is going to be a very busy time for me this year and although I've scheduled all of May's posts, I won't be on the blog much as I've got a lot on.  I will go into detail about what on May 29th's post.

Email ThisBlogThis!Share to TwitterShare to FacebookShare to Pinterest
Labels: april a to z, villain