Here are some details on different gamebook characters.
Your character - Lone Wolf
History:  You are a young Kai initiate who was sent to collect wood as a punishment for inattention in class.  When you return to your monastery, you see a huge coud of black leathery creatures attack your monastery.  Fortunately, you manage to escape by knocking yourself out(?) and wake up to find that your order has been destroyed and that you are the last of the Kai.  You must now warn your king.  This is only the beginning as your journey to the rank of master involves obtaining a powerful Kai weapon, finding the traitor who started all of this, preventing the resurrection of a darklord and, finally, killing a darklord and finding a sacred Kai text that will guide you into finding more powerful Kai disciplines.  You have several adventures to find some lorestones, each one giving you more knowledge.  When you collect them all, you go to the city of the darklords and blow it up.  You then return to your monastery, the Kai restored and have several further adventures until you get some more grand masters and then they start having adventures instead.
Description:  Lone Wolf is depicted as wearing the green clothes of a Kai Lord and looking pretty badass.
Abilities:  As well as combat training, Lone Wolf starts his adventures with five of the ten Kai disciplines.  When you become a master, you can learn improved disciplines called Magnakai disciplines which can improve as you rise in rank.  When you become a Grand Master, you can get Grand Master Disciplines which also improve as you rise in rank.
Equipment:  Lone Wolf starts off with quite basic equipment but along the way he can pick up some potent equipment, only some of which he can carry over to the Grand Master books.  Lone Wolf gets some cool toys to play with in his adventures.
Some of the awesome equipment Lone Wolf can carry:
The Sommerswerd:  The ultimate Kai weapon.  Gives a +8 combat bonus, deals double damage against undead and absorbs all hostile magic against the wielder.  Lone Wolf gets this in book 2 and it makes life so easy that Joe Dever makes life deliberately harder for him in later books if he has it.  In Masters of Darkness, Lone Wolf gets a korlinium scabbard to hide its power.
Kagonite chainmail:  This is light armour that can be worn in addition to other armour.
Silver helmet:  Gives Lone Wolf a combat skill bonus.
Jeweled mace:  A magical weapon.
Silver Bow of Duadon:  Increases Lone Wolf's ability with a bow.
Crystal Star pendant:  Doesn't do much, but marks that you have met Banedon and looks pretty.
Golden Amulet:  Protects Lone Wolf from the poisonous atmosphere of the Darklands.
Crystal Explosive:  Lone Wolf uses this to blow up Helgedad.
The Book of the Magnakai:  Lone Wolf uses this to learn the disciplines of the Kai masters.
Lorestones of Nyxator:  These gems contain the wisdom of the Kai and heal Lone Wolf.
The Moonstone:  A powerful artefact, created by the Shianti, which increases the health and prosperity of the whole of Northern Magnamund.  Lone Wolf decides to give it back to the Shianti when it turns all of the seasons into one spring and he decides that it is being too disruptive to the delicate natural balance of the world.
Kai Weapons:  Upon becoming a Kai Supreme Master, Lone Wolf gets the power to create ten powerful magical weapons.
Strategy:  Lone Wolf's strategy involves falling back on his powers.  The quests he goes on would be too difficult for someone who does not have them, so he is the only person who can achieve them.  Sometimes, combat is the only option which is fine for him as he is skilled with weapons and has a nice array of magical weapons and armour as his adventures continue.
Companion - Kyle Boche

History:  Kyle Boche is described as a trader by some, but he is nothing more than a treacherous rogue to others.  He wants to seek the Heart of the Volent for himself.
Description:  When you meet him, Boche is described as a small dapper man in a grey trimmed white snowsuit.  If you are able to use ESP, you may get to read his mind.  You find out that he is vain, pompous and self serving.  Someone you meet describes him as a parasite whose sole instinct is treachery and sole talent is self preservation.  Another man says that he is more complex than that.  He thinks that Boche is a man of such prodigious vanity that he can admit no faults.
Abilities:  Survival is one of Boche's abilities as he does not display a great ability at combat.  He has an ability for getting other people to do the hard work for him.  He also has a few flashes of inspiration such as hypnotising himself to forget that he is carrying a grenade (it makes sense in context.)
Resources:  Boche kits himself out with a barysal gun and a grenade.  He does not have any special equipment and he has few contacts that trust him any more.
Strategy:  Boche basically tries to convince you to travel with him.  If you do, you end up protecting him from all the dangers of the journey.  He basically tries to get other people to do the hard work for him.
Quotes:
'I expected a little more support from you.  Have you forgotten that I started out with a gesture of comradeship by paying the bill at the Etruscan Inn before I knew a thing about you?'
Main villains - Karam Gruul
History:  Karam Gruul is one of Brice's most notorious generals.  He is wanted for a very long list of war crimes but he has been in hiding for the past few years.  He has recently been spotted in a town called Blackhaven.
Description:

Most of the time, Karam Gruul walks around disguised as an elderly wizard called Radu the Magus.  When you do find him, you see that he is tall and has very long fingernails.  In this interview, Stephen Hand that he wanted Karam Gruul to be a Fu Manchu/Moriaty villain.
Abilities:  Karam Gruul possesses an extremely high intelligence which he uses to stay hidden for years, manipulate organisations from behind the scenes, create doomsday devices, anticipate his enemies moves and make all kinds of contingency plans.  Gruul has also created his own form of magic known as Notura which can evoke powerful spells, raise the dead and create strange monsters.

Resources:  Gruul commands a cabal of war criminals, an extra dimensional being known as the corpse master, zombies, zombie like fogwalkers and a squad of sorcerer assassins.  He has also somehow managed to get a shape shifting mandrake to take his form in order to keep him safe.  Gruul has many secret hideouts and it is only when his plan comes to a climax and he is confonted does he make himself known.  In order to cause widespread death and destruction Gruul created the Ethereal Projector - device that can kill thousands.
Strategy:  There is no strategy that Gruul has not thought of.  Body double?  Check.  Manipulated army?  Check.  Undead?  Check.  Deadly traps?  Check.  Killing the hero's allies?  Check.  Dangerous diversions?  Check.  Anticipating his enemies' moves?  Check.  It is only by dogged determination and the skin of your teeth that you will actually catch Gruul and bring him to justice.
Quotes:  Since he is so good at hiding, you do not get to speak much to Gruul.  However, he does sometimes leave messages lying around.  For example, his assassin leaves this letter in the house of one of your dead informants:
Greetings, Bounty Hunter.  I had hoped that we would meet before this necessary termination of your meddling.  But you have proved to be too disruptive.  For that, I congratulate you.  For this letter coated in deadly contact poison, however, YOU must congratulate ME.  In the end, only I, Karam Gruul could win.  Now go to your gods.
This says it all about Karam Gruul.  He looks down upon you as a meddling pest and enjoys revelling in his genius. 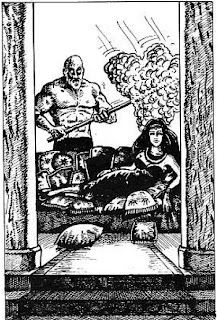 Villain associates - Leesha
History:  Leesha is the ruler of the desert city of Vatos.  How long for, no one knows.  She has lately allowed Malbordus to stay there while he searches for five dragon artefacts that he will use to rule Allansia.
Description:  Leesha is a beautiful young woman who spends her day lounging around in luxury.  She has a taste for fine art and poetry.
Abilities:  A powerful sorceress, Leesha is immune to all weapons apart from a Sandworm's tooth.  She can paralyze an adventurer with her laugh.  She can also create magical rings which make the wearers immune to physical attacks.
Resources:  Leesha seems to have endless wealth in the lost city.  She summons artists from all parts of Allansia to paint for her, she leaves solid gold idols lying around and she is waited on by an army of slaves and creatures.
Strategy:  Leesha relies on her powerful magic which works very well against you.
Quotes:  She doesn't actually say anything in the book.  She escapes alive, however.  I think a sequel is in order...
Mooks - Orcs
History:  Orcs have different histories depending on the world they are on.  On Titan, they were created by Hashak who hid them as he was ordered to destroy them.  They were turned evil by the Dark Lords of Chaos
.
Description:  Orcs are green, muscular and have lower intelligence than humans.  They are ugly and animal like and a lot of them have mutations.
Abilities:  Beyond their strength and warlike nature, orcs have very little use.  There are some shamans that can wield magic but they are mainly just foot soldiers.
Resources:  Orcs basically like weapons.
Strategy:  Attack!  The orc in Beneath Nightmare Castle is a cut above the average orc, however.
Quotes:  Urk.
Wild cards - The pilot from Space Assassin
I describe the pilot as a wild card as your encounter with him could go well or badly.
History:  The pilot is a machine with the aim of err, piloting the huge space ship called the Vandervecken.  Except, according to a technician you may meet on the ship, it is alive.  The scientist, Cyrus, wants the pilot to be shut down as the pilot disagrees with him. 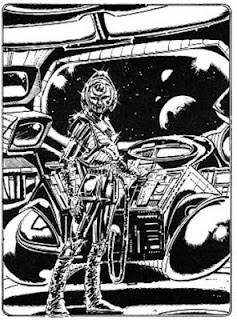 Description:  The pilot is a robot who is very pleasant to talk to as long as you are polite to him.  He likes to ask deep philosophical questions about existence.
Abilities:  The pilot is sentient and curious about its existence.  It does not seem able to defend itself in combat as if you fire on it, it will be destroyed.  The pilot is capable of manipulating the ship.  If you befriend it, it is able to stop escape pods working.
Resources:  If you annoy the pilot, it can trap you in a stasis field.  It also has access to the Vandervecken.
Strategy:  The pilot does not want to fight you but ask you deep philosophical questions.  Saying you don't know is the safest option but it disappoints him.  Engaging him can be the most rewarding option.  Ignoring his questions will annoy him to the point where he traps you in stasis.
Quotes:
If you decide to shoot the pilot, it says 'What a strange person' before bursting into flames.
'...do you think that you could be dreaming me or I could be dreaming you?'