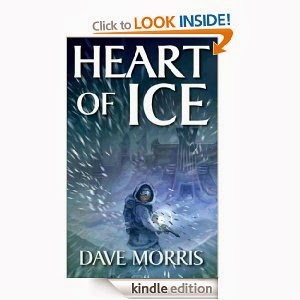 Heart of Ice has recently been re-released as part of the Critical IF range for  Kindle and paperback.  I read the original version a few years ago.  Back then, I thought it was one of the best gamebooks ever, if not the best.  And now, Dave Morris has made it even better.

It's a big statement, but now I'm going to back it up.

So what's going on?  In the far future, the Earth's climate has been destroyed by a computer program known as Gaia, which has been infected with a virus that has driven it haywire.  Most of the planet is covered in arctic waste, apart from the bits that are covered in hostile jungle.  Humanity will probably be extinct in a century's time, so the rich live lives of hedonism and decadence while the rest of humanity struggle to survive.

One day, you hear Gaia talk to you through a TV screen where she tells you of the Heart of the Volent, which will grant ultimate power to whoever takes it, and so starts your quest to find it.

The writing does an excellent job of communicating the bleakness and hopelessness of the world you live in and you can get to see lots of it.  Dave Morris describes everything vividly from arctic wasteland to hot jungle to crazed mutants.  You really get the feel that you are in a hostile world. 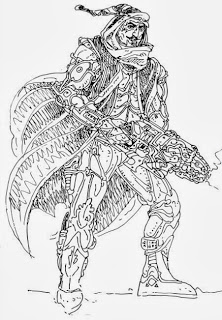 On the game side, there is no randomness, and so no frustrating deaths from die rolls.  There is also plenty of variety as you can take several routes to reach your goal and also choose 4 skills from a list of 10 which will depend on which situations you should deal with.

The structure of the adventure is one of the things that makes it so special.  Your journey allows you to really explore the world you live in.  As you do, you find other people after the Heart of the Volent and get to either interact with them or learn about them.  The characters in this story are all interconnected and they all have their own special MO which makes them all formidable characters in their own right.  Meeting with them allows you to learn about them or make some friends or enemies which may become important later.

You may also get to talk to Gaia more or learn more about the Heart of the Volent.  It turns out that this powerful artefact is not all that it seems to be and Gaia has a reason for sending you to look for it.

Eventually, you will fin the temple where the heart is located and find many other people there looking for it, some of whom you may have met on your way here.  This is where things really start to hot up - you can form alliances with certain characters when you go to explore the dangerous temple, but these alliances might break as soon as your perceived use may be over.  You don't know who to trust in this game, but you will still need the help of others to reach the Heart of the Volent.

Eventually, you might find it and this leads to one of the other wonderful things about this gamebook - it
presents a situation where you really have to decide what you think is best.  There are several endings and different people will have different opinions on what they will think the best ending is.  None of the endings involve you saving the world and giving humanity a lasting peace and happiness, but it is up to you to choose what you think is the best ending.  In a format where your choice for endings rests between 'you win' and 'you die', this gives the book a sense of gravitas that most gamebooks do not have.

The writing does an excellent job of communicating the bleakness and hopelessness of the world you live in and you can get to see lots of it. 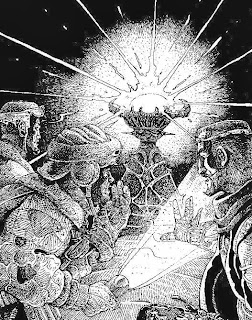 On the game side, there is no randomness, and so no frustrating deaths from die rolls.  There is also plenty of variety as you can take several routes to reach your goal and also choose 4 skills from a list of 10 which will depend on which situations you should deal with.

So Heart of Ice is a fantastic gamebook - one of the best, if not the best gamebook out there.  It has a real sense of story with deep, well thought out characters, an immersive setting and several great endings, where you decide which one is the best.  Buy it immediately!

Heart of Ice is available for £1.96 on Kindle and £5.87 in paperback form.  And if you love that, why not have a look at the other gamebooks in the Critical IF range.
Posted by Stuart Lloyd at 12:00 AM