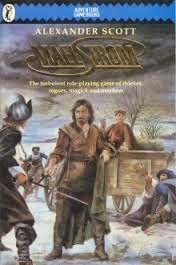 Maelstrom was brought to my attention thanks to Graham Bottley at Arion Games who republished the Maelstrom Domesday.
original book and then followed up with expansions and then his own version -

The original Maelstrom was published in 1984 by Alexander Scott, who was 16 at the time, obviously in order to tell me that I wasted my teenage years.  The game, is set in Tudor times when there is significant upheaval in the country.  Characters are ordinary people who have to survive in such times.  Your characters can be butchers, traders, priests, mercenaries and rogues.  If you want, magick can be introduced or left out with no real effect on the game.  This is because most magick in Maelstrom works by producing outcomes that are likely to happen anyway (such as making someone fall over etc.) except they would be things that the mage wants.  Things that are physically impossible would be spells of the highest power and extremeley difficult to pull off.  It's always amused me that Magic Missile, which would be a simple spell for most magic users, would be almost impossible for a Maelstrom mage.

Characters have 10 stats with values from 1-100.  Tests are done by rolling a d100 and trying to get under or equal to that value.

Maelstrom is very good for being very simple and also very realistic.  There is a wide range of weapons with different levels of quality, which is demonstrated by having different modifications to attack skill and defence skill and different dice for damage.  Combat is very punishing, but the idea of the game is not to fight all the time - it is to navigate your way through a time where the monasteries were being dissolved and poverty was rampant.  Peasants hunted witches and greed and betrayal were everywhere. 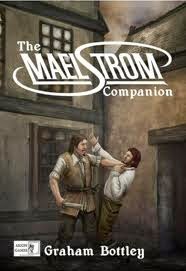 Maelstrom is a very versatile game as it can cover almost every theme - you could have a party of traders and labourers and do a business campaign. Or you can have a band of mercenaries, bladesmiths and rogues for a miltary campaign.  Or, you could have a group of priests and mages for a supernatural campaign or a campaign where all of your characters are beggars and rogues who have to eke out a living.  The Maelstrom Companion and the Beggar's companion help expand on the original rules.

If you fancy a standard Fantasy Dungeon Crawl, then you could use the Maelstrom Fantasy Toolkit.  The mechanics in Maelstrom are versatile enough that they can fit into almost any setting. 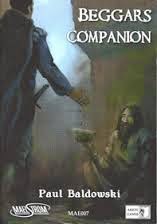 Graham Bottley has improved upon the orignal ruleset with Maelstrom Domesday.  In the original Maelstrom, you had your stats and a living, which allowed you some special privileges.  However, these extra living based privileges were not systematised in any way.  The only way you could pick locks was to become a burglar - there was no pick locks skill.  What Graham has done is put certain talents along with each living making the system more streamlined and systematic.  He has also created a lifepath character creation system, where you roll dice to determine what careers your character has.  I have done some and put them here.   Some turn out OK, but some end up with broken ribs and leprosy before they start.

Maelstrom is very versatile and puts lots of detail into many things such as its herbs, alchemical recipes and
other situations.  It got me thinking about the balance between complexity and options in gamebooks. 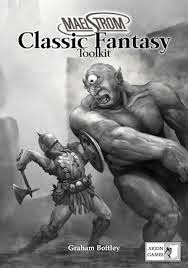 However, gamebooks have the advantage that no one needs to know the inner workings of the mechanics because their limited options and lack of human interface mean that the writer of a gamebook does not need to think of every rule in detail before deciding the outcome of a decision, especially when it may be the only situation in the gamebook when that situation in the whole gamebook.

There does, however, need to be a balance.  It may not be a detailed rule that informed the decision but it has to have some logic or common sense to it.  In a lot of ways, gamebook writers have it easy.  We don't have to memorise and familiarise ourselves with massive tomes of rules and remember endless numbers.  In fact, it is better that we don't and that we keep the numbers simple.  However, we do have to make more rules than the ones we present the players in the book - for example, laws of magic, maps of the areas the players go to, characteristics of different people and groups. 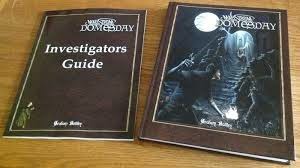 These rules may not present themselves overtly in our books, but they might become apparent to the
observant reader.  When I see a sense of consistency and logic in a gamebook, I do find that comforting.  It shows that the writer has thought about their world and how it works and that I might be able to work out something that could help me later.  It's something I will endeavor to do in my future gamebooks.
Posted by Stuart Lloyd at 12:00 AM