Magic items based on their owners 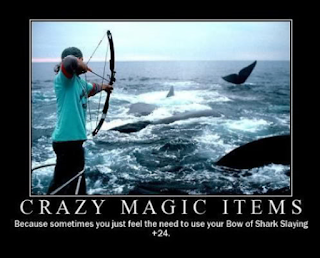 Something I read in Sorcerers of Ur-Turuk got me thinking about Magic items. In this game, there are magical artefacts that you have to recover, but they don't actually do anything magical. Instead, they have latent powers that only sorcerers can access by studying them and taking them apart.

This got me thinking about magic. The only way that magic can manifest is from people who make it happen. There are no inanimate objects with magic in them. You need a person to do it and they have to make a sacrifice in terms of years of study and then possibly getting fatigued or other effects. Some other magic is like that. In the Game of Thrones world, magic only seems to work based on some kind of sacrifice in terms of someone's life energy. The Red Priests require blood. The Warlocks across the Narrow Sea wanted to keep dragons captive to power their magic.

This got me thinking that magic items should just not be thought of as reproducible factory items, made to demand with predictable effects, but rather created because of the things they have done and the reputation and skills of their owners.

I was thinking about this in terms of Advanced Figthing Fantasy 2nd edition. This system does already have an approach like this in the sense that you need special components to make a specific magic item, but it still seems to factory-like and predictable. If I have this special metal and this workshop and have enough points in my Magic - Enchanting skill, the sword I make will give a +1 bonus to damage rolls.

For example, a magic sword that gives a bonus to damage rolls might do that because it was in the possession of a mighty warrior known for his great strength who used the sword to decapitate a giant in one blow. This happened in the first Knightmare novella. Treguard's sword became special after he slew a dragon with it.

A magic shield might have been the shield of a brave paladin and so it could confer immunity to fear magic.

This approach incorporates a bit of world building. Instead of just creating a sword +1, you have to create a character who used the sword, what they did and what they had a reputation for. You might also need to create some famous events that they were involved in. Instead of magic items being "+1 swords", they now have names such as "The sword of Braxis Giantsbane".

Basically it's like artifacts from Dungeons and Dragons but for items of all power levels.

This could also be part of the player's game. In AFF2 terms, I came up with a character who has at least 1 special skill with 5 or more points and who uses a particular item for 10 years or more has the potential to get it enchanted. It then needs to be taken to someone with a Magic - Enchanting skill of 5 or more or taken on a special quest. Once it is enchanted, the power it confers is not to order, but rather based on the character's highest abilities and their deeds. I would only do this once per character.

If the person who used the item for 10 years also uses it after it is enchanted, they could also get an extra bonus as they are "bonded" to it. Also, if a special item is passed through the generations, it might pick up more powers. Also, the item could get a more powerful ability but also a drawback related to a flaw of its owner. I also decided to include 10 years and not "after their death" so that characters could do this and you could meet the owner of the item. That would be interesting.

So that's how to create some more interesting magic items whilst incorporating some world building. And to also find a way of justifying that bow of shark slaying.