Doctor Who and the Fescan Threat 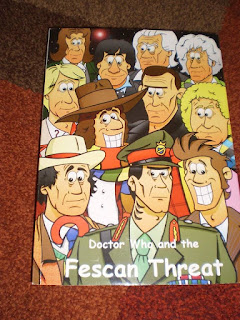 What is a Fescan? Is it like a fresco? Perhaps it's like a fax machine? I have no idea. Not yet, in any case. But thankfully, we have a professional on hand who knows all about them. We can trust him, he's a doctor.

Doctor Who and the Fescan Threat is a gamebook adventure by Chris Stone, and he's asked me to give it a whirl and see if I enjoy it. It is available exclusively at http://site-923261-5170-4857.strikingly.com for a limited time, and proceeds go towards mental health charities.

If you don't know what Doctor Who is by now, I'd like to introduce you to the longest running sci-fi show in the world (beating out Star Trek), and also the show of the most variable and often dubious quality. Get your bubble-wrap ready if you want to cosplay as any of the alien monsters in this show, kids!

Our story begins with the doctor telling his trusty companion that the Fescans are alien fish people, and he has faced them multiple times - once for each of his incarnations. Now don't worry, you'll get a chance to see many of these, as his first ten incarnations are included in this book, each one with their own adventure against the fish folk. (translation - you get ten adventures to play through here, guys). So, I chose to decide by a completely random roll of a ten sided dice to let's see which Doctor I will be...

As the Sixth Doctor, played by the iconoclastic Colin Baker, you have a strength of 40. You are armed with a coat that could make a blind man's eyes bleed, and a badge in the shape of a cat. Your special skill is hypnotism and being fired by the BBC.

After rolling up a few stats, the TARDIS arrives in the Carollean system, and I have the choice of which planet to land on. I opt to check out the desert planet of Loxani, which I am reliably informed to be quite hot. Leaving the TARDIS, I wander northwards through the baking sun until I arrive at an oasis. Finding a few sprigs of orange berries growing on some oasis foliage, I chew on them until I realise that they're poisonous and spit them out. Well, going good so far! 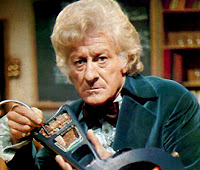 Taking some of the berries with me, I explore the oasis a little bit more and take note of just how verdant it is. Very peculiar... At this point, a small assault craft descends overhead. A Fescan battle craft, it quickly opens fire. I dive for cover, but not before taking a sharp burning hit from its laser beams. Watching from under some cover, the fighter craft jets off into the horizon. The doctor proceeds past the desert, over the sand dunes, until something truly unusual catches his eye - a city, floating over the desert on a huge disc.

Eager to go and be haughty and arrogant at them, the Sixth Doctor scurries his way to the city and clamber aboard. It's an impressively futuristic city, kept cool by what I assume is either a geothermic dome overhead or by cunning air conditioners hidden where you least expect them. Wandering through the streets for a while, it isn't long before I catch sight of something suspicious - a group of Fescans. I head off in their general direction, and soon find myself standing outside of a bar. 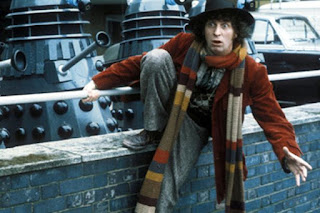 So, ahem, the Doctor walks into a bar. The bartender asks me "Why the long face?" I tell him that Jon Pertwee's nose wasn't that big. Boom boom. Ahem. Anyway. The Doctor sits down at the bar, and a drunk chap wanders over and says "Psst, hey buddy, you're not a member of the secret underground looking to overthrow the Fescan invaders, are you?" The Doctor, naturally, steals the man's glass and runs out of the bar instead. Can't help but feeling that I missed a useful clue when I chose to indulge in my kleptomania...

Leaving the bar, I eventually find a large statue of a Fescan warrior. The locals seem to be avoiding it, and it's pretty clear that there must be some real systemic hatred of their cruel overlords. Can't imagine why. I manage to stumble onwards until I find myself in a rough part of town, full of people wearing hoodies. For a moment, I thought I was in London rather than Loxani. 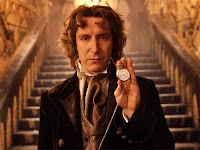 I soon find my way into a park, which sets my mind to rest by reassuring me that I am indeed on a desert planet because most of the plants are cacti. Apart from some red flowers, one of which I take to wear on my gaudy coat. In a rather unusual twist of architecture, I soon stumble my way past a castle, portcullis and all. Evidently the inhabitants of the desert planet of Loxani are big fans of European castle designs. On my way through the castle, a Fescan guard asks for my ident card and, when I don't have one, he shoots me. Say what you will about the criminal justice system...

I wake in a cell. And, being the Doctor, I immediately find a small electronic panel near the door. While fiddling around with it to try to unlock the door, I accidentally create a swirling wormhole in the fabric of space... as you do... And being a bit of a sucker for diving into swirling vortexes of chaos, I dive right in. 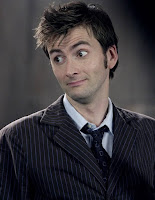 I promptly fall through space and time, tumbling through universes and witnessing abstract images and thoughts given form. Flames dance around me and meteors fly past, and before long I am absorbed by a sentient entity made of the colour purple. It devours me entirely, and my misadventure ends here. A tragic state of affairs, really.

Doctor Who and the Fescan Threat is a good, solid gamebook. It's long at over 2000 segments, and captures the feel of the TV show very nicely. Right off the bat, you're given a path that splits off if you play as the 1st or 2nd Doctor, and if you don't then you are presented with four possible planets to select to explore, all of which means that there's a lot of replayability here.

This book is a limited printing, and all proceeds go to mental health charities, so if this sounds like your kind of book or you would like to benefit a good cause, grab a copy fast before it's too late. http://site-923261-5170-4857.strikingly.com


(If you've enjoyed this article, be sure to check out Justin MacCormack's bestselling collection of horror stories - "Darkness Bites", and the young adult coming-of-age comedy "Diary of a gay teenage zombie".)