Dungeon of the Orc Boss play through 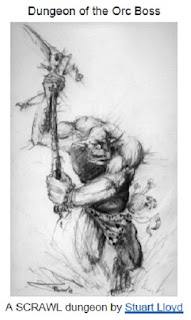 Hello all! I have just a quick playthrough report of Dungeon of the Orc Boss. I decided that I would
play as Bob the fighter. Bob decided to buy a suit of light armour and a smoke bomb before setting off on his quest to kill the orc boss.

On the way across the plains, he came across a knight who offered him a challenge. Bob loses 1 Vitality point, but gets two hits in and gets 1xp.

In the first room, Bob easily slays a goblin to find a potion of curing. He then falls into a trapdoor down to level 2 into the down stairs room (decided by rolling 1 die). Bob then tries to get up to the next level to escape. He faces 2 goblins which take him down to 1 Vitality and make Bob spend a couple of xp to get rerolls to avoid death. However, he manages to get an art object worth 106 gold pieces.

In one room, he slays an orc (spending more xp) and opens a trapped chest. The chest has a poisoned dart trap which threatens to take his last point of Vitality. However, Bob quaffs his curing potion to negate that damage and opens the chest to find...a curing potion. Great. Bob also gets 1gp in coins (rubbish) and a piece of art worth 28gp.

When he returns to the village, Bob spends all his money on healing and healing salves and returns to the dungeon. He manages to slay his way through and gets to the Orc Boss. He spends a lot of xp to kill the boss and avoid the chance of losing 2 Vitality. Bob slays the Orc boss to get his 100gp and another art object. Bob returns with 199gp of treasure and a potion of curing. He gives 100gp to the villagers to get 1xp and now has a total of 6xp.

Things I learnt from this play through

You too can play Dungeon of the Orc Boss using SCRAWL both of which for PWYW.