Hello gamebook team! I know last week, I did a post on random elements in gamebooks which I fully intend to continue. Unfortunately, I haven't had time this week to do post 2, so here is a post I saved up. A scathing gamebook review of my book Rulers of the NOW. 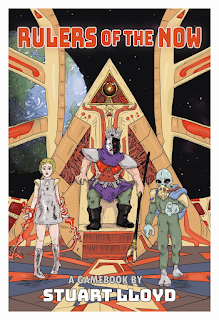 In this issue, we look at Rulers of the NOW, a dystopian, self described comedy, by Stuart Lloyd.

The author has described this work as a near future, dystopian, cli-fi black comedy, probably because he thought that putting as many adjectives as possible into the book’s description would be funny, or at least distract the reader from how dire it is. Unfortunately, it does neither.

The best part of the book is the cover. It is skilfully crafted by Sammy who is a talented artist and the author of the Two Fisted Fantasy gamebooks. Unfortunately, she had to bring to life the products of Stuart’s diseased mind, but she nonetheless takes his insane ramblings and produces an awesome cover art. If only other authors would pay her to do something, then she would not have to associate with the author who is a clear raving maniac.

After the beautiful cover art, it goes quickly downhill from there.

In this book, you play a lowly office worker, who, at the beginning of the story, gets branded a terrorist. From there, you can decide whether to go along with the authorities or go on the run. The author clearly has a problem with authority because going along with the authorities gets you thrown into jail and sent to a re-education camp for years, then the book ends. Going on the run has a far longer route where you can meet some rebels, find a home, and, if you go far enough, go aboard the space station where the billionaires live.

The beginning of the book appears to be a homage to Kafka, if the person doing he homage had attempted to skim the summary of Kafka’s work on Wikipedia, but actually read Dan Brown’s page instead without realising it.

The book seems to be taking potshots at certain philosophies or lifestyles and tries to point out the problems with them. As if his gamebook is going to solve the world’s problems. I mean, whenever did a book ever highlight a possible horrible future that it could slip into to warn its readers to avoid it?

Well, lots of times, obviously, but they were good. This book is like a cross of The Trial, The Illuminatus Trilogy, Nineteen Eighty Four and The Divine Comedy, because why not, I guess?

The book moves from chase to search to heist to rescue mission, each time, attempting to raise the stakes or teach you something about how messed up the world is. In reality, it just made me want steak and it taught me how messed up Stuart’s head is.

There are many of what the author would probably describe as jokes in the book. I’d like to say that these jokes deliver the book’s message skilfully with wonderfully crafted humour. However, if I did say that, I would be lying. These “jokes” can be seen coming a mile away. The first section has a joke about Youtube ads and flatulence. I mean, some on, flatulence is just too easy. It gets even worse, where you could come across a cannibal whose heinous crimes are played for laughs. There is nothing funny about cannibal blancmanges.

The book is clearly a love letter to socialism and environmentalism, which is not inherently bad in itself. Everyone is entitled to political opinions and the right to broadcast them in whatever media they like, but the messages of this book are delivered with the subtlety of an anvil being smashed into your face by an elephant wearing a top hat. The author obviously has a massive bee in his bonnet or there is a satanic death cult ruling the world that paid him handsomely to inflict this steaming piece of work upon the world, probably in return for a human sacrifice to grant him eternal youth (have you seen Stuart Lloyd? He claims to be in his late 30s!) .

The book is currently free on Itch and Drive Thru, but, after reading it, I felt like the author owed me money for having to sift through it in order to write a review of it. I would have given a better review if he had taken a dump on my doorstep and told me to sift through that instead.

Email ThisBlogThis!Share to TwitterShare to FacebookShare to Pinterest
Labels: Rulers of the now, scathing gamebook reviews