Hello all! Back to my series on the good and bad points of having random elements in gamebooks. This week, I'm going to look at the costs of doing so and how these random elements might cause work for the player.

So, when I say work, I do acknowledge that rolling a few dice is nothing like doing an actual job. What I am trying to express is that the idea of getting a random result has the advantages of some tension and excitement and if too much dice rolling and number picking has to happen, then the excitement might wear off and all the dice rolling and number picking will be a chore.

So what situations does this happen in? Firstly, it does not seem to happen in skill tests. They all seem to be one die roll (for the sake of brevity, I will refer to do rolls despite the fact that it could include picking numbers at random from a square of random numbers, coin flipping, picking cards from a deck etc.) with a pass fail, if that. A lot of times, the book simply asks if you have a particular skill, so no dice roll is involved. In these cases, you either roll a number and the higher the score the better, with the skill giving a bonus (Lone Wolf) or you roll to get higher than a number and add a stat (Fabled Lands), equal to or less than a number (Fighting Fantasy) or just less than a number (Fighting Fantasy which wasn't able to make its mind up sometimes).

In the cases with trying to compare your scores to the dice roll, the tricky bit has always been what to do with the case when the dice rolls are equal to your score. In all cases, the book decides that rolling equal to the score is either a pass or a fail. This means that you don't have to reroll your dice if you get an equal value to your score.

For some reason, in some cases, this idea goes out of the window in combat.

In Fighting Fantasy, you roll 2d6 and add to your skill, then do the same for your opponent. If the scores are equal, nothing happens. Unless there is a time limit to the combat, then all that dice rolling has resulted in nothing. That's one way to watch the excitement drain down. However, at least the chances of getting a draw in a Fighting Fantasy combat are quite low - 11% with two fighters with equal SKILLs and lower if they are unequal.

Having a draw in combat does have utility if something will happen after a certain number of rounds, but I don't think that it is worth it. The solution here is simple, though - simply state that rolling equal scores is a win or a loss for the character.

In some cases, the character needs to roll equal to or less than their skill to hit an opponent. This turns up with ranged weapons, which makes sense. There is less interaction with the opponent, so it is more like a skill roll for you than for both of you. This turns up a few times in Fighting Fantasy (Starship Traveller, Space Assassin, Siege of Sardath)

However, this has the potential to make combat drag out even longer because both combatants can roll above their skill and miss, so nothing happens. Siege of Sardath has a mechanic where if you miss with an arrow, you can test your luck to make it a hit, reducing the probability of missing (which is good, because there is a case in Siege of Sardath where you have to hit with an arrow or get an instadeath). You could also do a luck test to turn a hit for an opponent into a miss. This would be good in Starship traveller where ranged combat normally involves a one hit kill.

What about other gamebook series?

To hit an opponent in Fabled Lands, you need to roll 2d6 + Combat to get above their Defence. The difference is how much damage you deal. The fact that damage is not a fixed number means that combat could be over very quickly.

The scores are linked - Defence = Combat + Rank + Armour, so the better you are at hitting opponents, the better you also are at not being hit. People used to include Combat bonuses from weapons to Defence, but that made characters unbeatable, so when book 7 came out, they decided that only your character's innate Combat would add to Defence.

However, they are not completely linked, so it is possible to have a high defence score whilst having a low combat score.

This is where combat could get tedious because if a character is bad at hitting but good at defending and they are fighting a similar opponent, then there will be several rounds where nothing happens.

Some people on the Facebook group have thought up ways around it. If you search "Defence", you will see what people say. One person has stated that if someone rolls a double, they deal damage equal to their combat score. Rolling a double on 2d6 has a 1 in 6 chance, so that would definitely speed up combat.

It is Lone Wolf, however, who wins the prize for making sure something happens in a combat round. If you look at the combat table, then, whatever number you pick, someone loses Endurance points every round. That means that combat will always flow. Of course, this means making a table for such a purpose, so the solution is not the most elegant. It is up to the person making the system and the person playing it to decide if that is a sacrifice they are willing to make. For me, it is. The system is very simple, so referring to one table is not going to overcomplicate things compared to some RPGs. 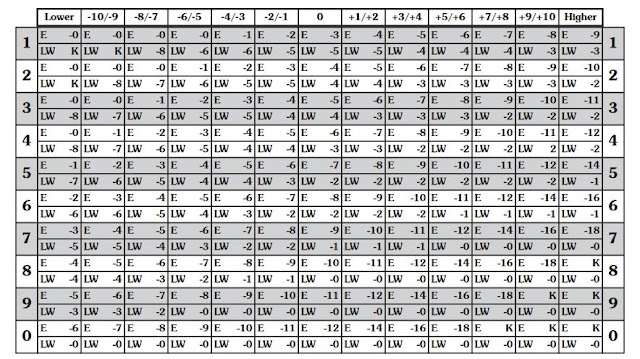 So there are basic systems where we find out whether something happens in a combat round. Of course, a combat system can still have a possibility of nothing happening in a combat round, but the wasted time and effort can still be reduced if the player has options to change things about that combat round, like manipulating dice rolls or having a special attack, having an ability that deals damage every round or doing various other things.

There can only be one winner when it comes to this and that's Destiny Quest. Seriously - look at the 9 page glossary of abilities (and that's just book 1!) you could use in combat. Combat is similar to Fighting Fantasy - roll 2d6, add your Speed attribute and the highest one wins. However, once you include all the abilities you could have (and you can have loads when you are fully kitted out), that gives loads of choices so that each combat round is less about rolling two dice and comparing numbers and more about making decisions about what abilities to use.

And if you love Destiny Quest, remember there is a Kickstarter for the World Companion coming out on the 17th May!

So it seems that the lesson from this is that in every combat round, have something happen - at least one combatant's stats have to decrease somehow. Or at least let the player have the opportunity to decide on making something happen.