Here is an ending from The Race Forever, the 17th Choose Your Own Adventure Book (and the first one I read) by R. A. Montgomery.  In this book, you are a rally driver who has entered a race in Kenya.  You can choose between the speed race and the rough road race.  You then choose a vehicle and meet your navigator/co-driver. The book is not as long as it sounds, but if you finish one race alive then you are offered the chance to enter the other race.  So therefore you can literally race forever.
102
Even though Eduardo is sure that the soldiers' repair is more than strong enough, you feel that it will be safest not to pull out all the stops.
Each time you stop at a checkpoint you examine the repair for signs of weakening.  The welded axle holds perfectly, though, even when you bottom out in a particularly bad gully in the Olduvai Gorge.  Eduardo spends an hour dragging, jacking, and pushing while you stand on top of the car and watch for puff adder snakes and other dangers.
Dusty, tired, and happy, you finally cross the ﻿finish line two days after you start.  You finish third overall.  "Not as good as first," you think, "but at least we made it.  That's better than many others."
Why I like this paragraph.

AsI like this paragraph because it is an example of a failure where you don't actually die.  The Race Forever is an example of a group of gamebooks where there is a sliding scale of success.  Too many gamebooks, usually ones that involve killing some evil wizard and saving the world, have two types of endings - you kill the wizard and save the world or you die horribly.  If for some reason, you don't kill the wizard but you do survive, you have to endure some crushing sense of shame and guilt for the rest of your life.

Choose Your Own Adventure books have a different approach.  In the Race Forever, you could die, but you could finish in a particular place number, you could win, you could get injured, you could lose your car and have to walk back or you could find gold and become extremely rich.

In this case, there you would expect finishing first to be the most successful ending.  However, you may then stumble across the gold paragraph and realise that you have wasted your life trying to finish first in some poxy race.

How did I get into this mess?

As I mentioned above, I couldn't really consider it a mess.  Coming third in a tough off road race across Kenya is no mean feat.

I didn't win because I chose the British Land Rover instead of the Japanese Toyota to do the rough road race.  Seriously.  You can't win the race in the Land Rover.  What a gyp.

You come across some refugees on your route and decide not to help them.  Then my axle cracked and some friendly soldiers repair it.  I finished third because I decided to go easy on the car.  If I would have decided to go flat out, however, I would have finished fourth, also in two days.  How does that work?  I guess this book runs on the moral of slow and steady wins the race.

What I have learnt from this paragraph

Gamebooks don't have to be about victory or death.  Having a sliding scale of success means that I will want to explore the other areas more.  If I get to the victory paragraph of a gamebook with two endings - victory or death - then no route I will take will have a better ending, so what's the point?

If I have a sliding scale of success, then I can get to an ending that isn't great but at least I survive to try again.  It will make a difference to having to die every time you 'lose'.  I could also put in a better ending where I can achieve the original objective AND get a bonus.  That will give a point to exploration because then there may be a way to get to a better ending. 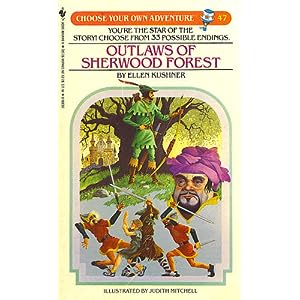 Some gamebooks go even further where there is no measurement of success between endings.  In Outlaws of Sherwood Forest (Choose Your Own Adventure 47, by Ellen Kushner), you travel back to Sherwood Forest from the present day.  Your objective is to make sure Robin Hood does not get captured.  You can achieve this and return home or you can acive this and stay in Sherwood Forest.  Both have their up and down sides, but only the reader can decide which one is better.

So instead of having victory or death, we can have several endings on a sliding scale of achievement.  Maybe we can have some surprise bonus endings that have nothing to do with your original aim but are great endings as well.  And maybe we can have some endings that aren't necessarily better but that different people would prefer.  This increases  replayability of books and provides pleasant surprises.
Posted by Stuart Lloyd at 7:17 PM

Email ThisBlogThis!Share to TwitterShare to FacebookShare to Pinterest
Labels: Choose Your Own Adventure, death, outlaws of sherwood forest, the race forever, your adventure ends here