There are six Sonic the Hedgehog books written by various authors.  Stormin' Sonic, the sixth and final book in the series was written by Jonathan Green and Marc Gascoigne.  I never played Sonic when I was a little 'un (cue tales of woe involving working twenty seven hours a day down pit) but I wanted to see what I had missed out on.

One interesting thought I had about this book and all gamebooks based on a tie in to an existing product is how much of it is dictated by the product's existing rules and story.  For example, did Jonathan and Marc have to make Robotnik the enemy, include characters from the game and base the game rules on rules from the computer game?  And do such things change a gamebook for the better or for the worse?  I would like to hear peoples' thoughts on this. 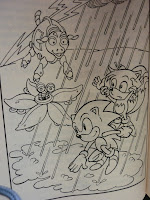 The weather on Miobius has gone nuts and you need to set it right.  The perpetrator is Robotnik (obviously) and you need to travel to different zones on the planet to collect clues in order to track down your arch enemy and stop him.  This plot invloves the theft of a chaos emerald and the inevitable appearance of Knuckles the echidna and the inexplicable kidnapping of Sally Acorn only to have her disappear just after she is rescued.  I'm sure a weather based story is almost inevitable in any long running adventure series or cartoon series (I'm talking about TV film and games, not just gamebooks) so it is not the most original of themes.  However, the four areas that Sonic and Tails explore are pretty fun with many opportunities for cool things to happen.


An interesting side note is that I think I'm starting to see how certain authors' ideas evolve.  The basic story of Stormin' Sonic is that a crazy individual has created a flying machine crewed by mechanical creatures in order to control the weather and take over large areas of land or even the entire world.  The hero has to explore four areas in order to obtain the means to defeat his opponent by getting on board his ship, defeating him in combat and then trying to excape from the ship before it is destroyed.  Does that remind you of any other gamebooks? 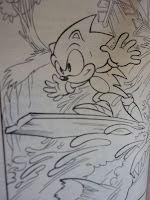 The many simple, cartoonish illustrations give me the impression that this book is aimed at younger readers; maybe pre-teens.  They are serviceable, pleasant to look at and do not have too many details.

After an introductory scene where Sonic finds out what is going on, we then move onto a hub where we choose one of four places to go. Once we have enough clues, we can then go on to save Sally Acorn and defeat Robotnik.  This then leads to the final scenario where we face Robotnik and his minions.  Most of the branches lead of to an area where you could get some rings and then return to the main path.  This makes the book quite linear as most of the choices revolve around how you will fight enemies as you will probably have to go to all of the locations anyway, your only choice is in which order you do so.  There is also an annoying section where if you have found Sally Acorn's scarf, you drop everything and end up in the final area without the option of exploring other places.  This caused me to lose my first play through, so I made sure that I went in another direction.

There are also a few occasions where Sonic will not let you take a certain course of action despite you choosing it.  These choices involve you being particularly cowardly.  If you choose them, Sonic will scold you and do the thing you didn't choose to do.  The idea behind this was probably to have someone kids look up to tell them how they should act and to make sure that they don't do naughty things like leave their best friend to roll down a mountain in a giant snowball or teleport back home before you have sorted out Robotnik.  The effectiveness of such a program of moral instruction has yet to be determined.


One thing that I liked amongst the options was the occasional option to try 'something else' to overcome the problem.  Intrigued by this option, I had to choose the 'something else' option every time - the mystery box of gamebooks.  I was not disappointed, especially when the option involved Sonic and Tails putting on an ice skating display to impress some robotniks. 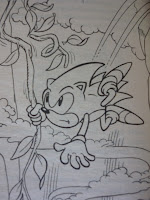 The writing sees to be aimed at pre teens and the language takes me back to the 90s.  I'm sure that I would have enjoyed it more as an 11 year old Sonic fan, the targeted audience for this book.  Marc Gascoigne and Jonathan Green write conversationally, informally and sometimes break the fourth wall in order to connect with the reader.  Here is a paragraph from the book to highlight the writing.

As they plod through the sandy wastes, Sonic and Tails suddenly spy on the horizon a large pyramid built from stone blocks.  'Woah!' Sonic exclaims 'Where on Mobius did that come from?'

'I don't know,' Tails admits 'but let's go and explore it.  We might find the treasure of the fairies!'

'Dweeb' is a very 90s kids' word and many others show up in the book such as 'dude' and 'cool' which are used in non ironic ways. 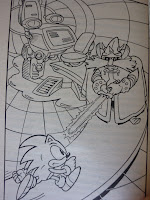 The rules system is very simple, has some nice exposition with it and is quite fair.

Sonic's stats are speed, strength, agility, coolness, quick wits and good looks.  You can allocate one of these stats a value of 5, one a value of 4, one a value of 3 and the others a value of 2.  Tasks and combats are resolved in a similar fashion - roll on die and add it to the stat that the book states.  If it is equal to or greater than a difficulty stated in the book (set between 6 and 10) then you succeed.  If not, something bad happens.

In the case of combat, your opponent will have a rating.  If you get equal to or higher than the rating, you beat your opponent.  If you don't, they can take a swing at you by rolling one die and adding it to their rating.  If they obtain a score of higher than 10 you will lose all of your rings or a life (just like in the game).

I found most of the die rolls to be fair and the consequences of failing are never huge.  The worst thing that can happen is that you lose all of your rings or a life.  You start with one of three lives and you may be able to gain more of them if you find one or if you get 100 rings.  There are a couple of instant deaths but they occur at the end of the book if you have not fulfilled all of the tasks.  This means that, with the correct choices and a little luck in combat, you should be able to make it through the book with a minimum of cheating (or even no cheating).

I found Stormin' Sonic to be a fine gamebook that hasn't aged well in terms of language and theme.  I may think this because I never was a huge Sonic the Hedgehog player and I am now a lot older than the target audience.  The gaming side of the book is fine with some great scenarios and good use of the rules.  However, the gameplay experience will not differ too much between plays as you will still have to explore every area - the main choice is the order.  In tiger terms, I think the word leftovers is a good way to describe Stormin' Sonic - it would have been perceived as much better by a Sonic the Hedgehog fan in the 90s but it hasn't aged well and so it has gone from being a decent snack to leftovers.
Posted by Stuart Lloyd at 8:38 PM