My Blood of the Zombies signing experience or: How I ended up having a pint with Ian Livingstone

About my trip to Forbidden Planet 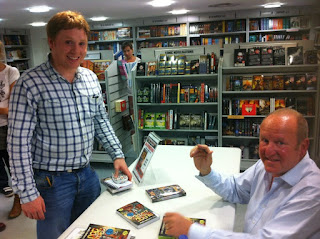 Having never been to a book signing before, I looked up how early I need to be for them.  Yahoo answers suggested 4 hours but I didn't go that early.  I went two hours early at 1pm to find someone else doing a book signing and decided to look at the various Call of Cthulu modules on offer.  At half one, I decided to go for a little walk and returned at about two to find a rack of Blood of the Zombies being wheeled out in preparation for Ian Livingstone.

I noticed that there were two other people who were also eyeing up this treasure trove and they turned out to be the Tin Man, who is going to release the digital version of Blood of the Zombies and the Warlock.  It was great to finally meet them in person and have a good old natter over a pint nearby before heading on over to meet the man himself.

But that was not all.  Whilst waiting to have my book signed, I also bumped into Torallion and Tony Hough, fighting fantasy artist and we all had a good old chat. 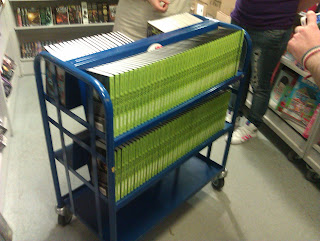 Upon meeting Ian Livingstone himself, I became a bit of gibbering wreck.  I managed to ask him why he had removed skill and luck from the book and he answered that people don't have time to fight combats any more but he then assured me that I will still die on my first two or three attempts.  So no change there then.

I also asked him if he wanted to write more books and he said that he certainly enjoyed writing Blood of the Zombies.  So I think that if we show him that we want one badly enough, he will oblige.

Ian stayed over his allocated hour to sign some books and afterwards I headed to the pub with Torallion.  After a brief diversion to a games shop where he showed me Arkham Horror (Lovecraftian boardgame =brilliant!) which I ahve just ordered.  We talked gamebooks, MMOS, MUDS and roguelikes before the Tin Man and the Warlock joined us.  We were then joined by Ian Livingstone himself!  In the pub!  Where we talked more and I managed to speak in complete sentences without gushing. 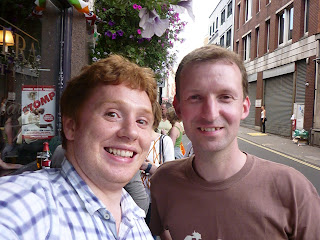 It was a most excellent day and I hope that there will be another signing soon (get writing, Ian!)

There is another chance to see Ian Livingstone.  He will be making an appearance at the Edinbught festival on the 11th August 2012, doing a talk about Blood of the Zombies at 10am and doing a talk at 2pm.

One of my Twitter pals, writer of awesome martial arts fiction and Way of the Tiger RPG, David Walters will be there to talk to Ian Livingstone.

About Blood of the Zombies 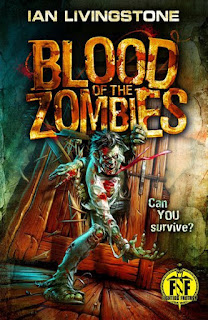 The book has an introduction from Ian Livingstone.  He states that he was originally going to do a Firetop Mountain themed book but he didn't want to do one without Steve Jackson.  He then wanted to do a zombie themed book in Allansia but then decided to change it to the modern world and that it was a big decision for him.

It would be fair to say that a lot of Ian Livingstone's older books are populated with high skill opponents making a lot of combats difficult.  Well, I can tell you now that it definitely isn't the case in this book.  That's because you don't have skill in this book.  Nope.  Not at all.  You don't have a luck score either.

'Then how is combat resolved?' I hear you ask.

Glad you asked.  Instead of skill, you have a stat called damage.  If you are unarmed, your damage is 1d6-3.  In the examples in the rules, Ian mentions that a knife has a damage rating of 1d6, a machine gun (nice!) has a rating of 2d6 + 5 and a shotgun (a must in anything zombie related) has a damage of 1d6 +5. 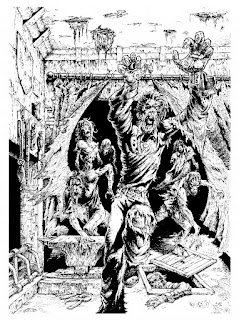 You still have a classic stamina score of 2d6 +12.

Combat is in rounds but instead of computing attack strengths, you take turns at hitting each other.  First you are told how many zombies you are facing.  Each zombie has 1 stamina point.  You then calculate the damage you inflict with your weapon.  Each point kills off a zombie.  When its the zombies' turn, each zombie automatically inflicts 1 point of damage on you.  You then go back to damaging the zombies.

My first thought was that this will make combat fairer as the amount of damage you deal is dependent on your weapon - something you can change and improve over the course of the adventure.  Your skill score was usually static and if it sucked, you were stuck with it until some monster mercifully made mincemeat of you.

however, as I stated above, Ian Livingstone assured me that the book is still very difficult as if not more difficult. 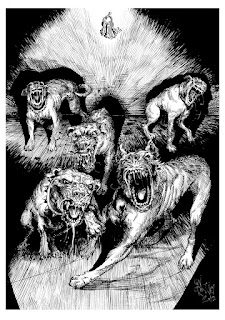 However, I can't talk about it any more because I've refrained from playing it because I'm going to do a playthrough with Scott Malthouse. Keep your eyes peeled for that.

I can say that there are plenty of Easter eggs in the gamebook.  The background contains a location name that is meaningful to Ian when he first started writing Fighting Fantasy.  There is also the obligatory depiction of Ian in an illustration and there's also a reference to Zagor.  So that's something else to keep your eye out for.

There will be an electronic version released by Tin Man Games...coming soon!