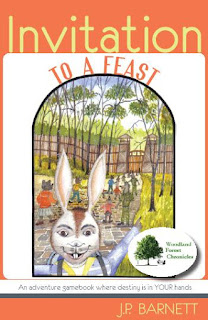 Early on in the book, I had a chance to save a bird's eggs but didn't due to a die roll.  A bit dejected, I went on along a road until I found a blue cobblestone.  I tried to pull it up but couldn't and I didn't have the blue spade needed to dig it up, so I carried on, looking for a stick. I did find one and returned to the blue cobblestone to find a box containing a gold coin and a note from the Noble Ranger (who is miles away organising a feast) praising me for my persistance.

Well that was nice, wasn;t it?

In a later play through of the book, I did save the birds eggs and got the blue spade.  When I dug up the blue cobblestone, I opened the box to find 2 gold coins and a note from the Noble Ranger (who is miles away organising a feast) praising me for helping the bird by saving her eggs.

That's nice, but how on Earth did that happen?

How could the Noble Ranger predict the outcome of the die roll I made, know that the bird would give me a blue spade and write an appropriate note with an appropriate reward in advance?

An in story reply would be that the Noble Ranger is magical (there are a lot of parallels between him and God) or that the whole thing was orchestrated as a test and that all the animals were in on it, the eggs weren't real and the bird called ahead to someone by the blue cobblestone to write a note (after all, you don't know who wrote it) and put a certain number of gold coins in there.

On the other hand, we could just assume that J.P. Barnett wanted to give a different reward for your actions and wrote an appropriate one in.  After all, you can't both dig up the cobblestone with a blue spade and a stick so you aren't to know any different what could have been in the box.  J.P. Barnett has created a parallel dimension.

Now this is an interesting concept.  The way I plan my gamebooks (and I think how other gamebooks are planned) is that I come up with a chain of events that happen or a site populated by various characters and creatures and then think about how the player will interact and change these events.  Some events may be outside of the player's control and happen anyway.  For example, in Fire on the Water, you will always be accompanied by an assassin on your trip and Ronan will always be dead.  Your choices do not affect those events but they will effect how much you know about Ronan's killers and whether the assassin survives the trip. 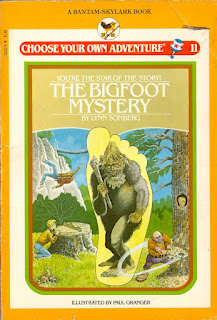 At first, I saw this as a logical inconsistancy that bugged me.  How can your choice affect the presence of a big cat or how many gold coisn you get?  Then I started looking at it in another way.  If you played the gamebook fairly (I know we all peek but go with me here) then there would be no way of knowing about the other consequence.  I wouldn't know about the mountain lion if I hid in the tree, so I can't blame the book for being inconsistant (OK, I can, but I'll only find out by cheating).  If I climb the tree, I'll have to deal with a mountain lion that's always been there.  If I hide in the tree, there is no mountain lion to deal with.  It's like each path in the gamebook is its own dimension and you can visit each dimension if you play again.

This idea of creating completely different consequences based on your choices seems to be more fir mechanical reasons.  I think the author does it to create more branching paths.

Jake Care in his article on Classifying and Rating Linearity came up with four basic types of linearity - linear, convergent, divergen and free roaming.

The method of 'There's going to be a mountain lion in this tree and the character's choices will affect what it does' is more linear than 'If the player does X, there will be a mountain lion.  If they do Y, there won't be'.  In the former case, you have to deal with the lion, whatever happens.  Once you have, you move on.  In the latter case, you may have to deal with a completely different situation.  If the Bigfoot Mystery had set encounters, then it would have been able to fit in a lot less than it did into its mere 53 paragraphs.

Creating what I call parallel dimensions is a good way to get more divergence out of a gamebook, something a lot of gamebooks are badly in need of.  I still feel a bit irked at the lack of consistency but the question is - am I being irrational?  Am I leaving out a potentially powerful tool just because I think that if I want a mountain lion in a tree, then there should always be a mountain lion in a tree no matter what the player does.  What do you think?

EDIT:  As is brilliant and typical at the moment (and long may it continue), things have been moving fast in the gamebook world, so here are some snippets of news:

Dave Morris is rereleasing lots of his gamebooks!

Two new Tunnels and Trolls solos have been released!

Fighting Fantasy to be removed from iOS next week!
There's a new gamebook creator program that needs your backing!  For a mere $3, you can get the program once it's released (and if it hits its target of $1000)!

Email ThisBlogThis!Share to TwitterShare to FacebookShare to Pinterest
Labels: barnett, Choose Your Own Adventure, linearity