News for January 2022 and upcoming news for February

Hello everyone! You know, it seems like forever since I last did one of these. And a lot has happened since late December.

The Warlock Returns Zine is doing a charity auction at 2pm GMT on Sunday 30th January.

the current line-up of FF/AFF celebs for The Warlock Returns Charity Auction sits at: 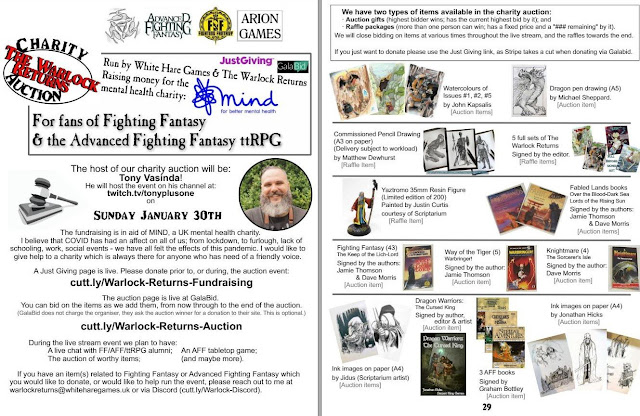 This book is the first chapter in the new ghostly time travelling game book spinoff series; The Ingram Chronicles. Since the intention of this series is to bridge the gap between the various endings of the Legacy of Craven Manor and the still to be announced third book in the series, it is recommended that you read the Legacy of Craven Manor first and complete the ending associated with this book.

This choose your own Shakespeare adventure produced by Tin Man Games is now on the Switch.

This is Book 3 of the thrilling LAST KID RUNNING gamebook series for 10 to 12 year olds. YOU decide how the story unfolds.

You are Runner X, one of six contestants in the final round of Last Kid Running, the craziest game show streaming on the mobile web.

You've been waiting eagerly for this. But the pandemic strikes, and the ingenious Dr Yamato creates a home-based VR version of this event instead, to keep the fans entertained.

HAUNTED is a horror story unlike any other -- YOU are the main character. After a mysterious invitation, you're set to spend three nights in a severely haunted house as part of a television show called The Offering. If you can make it through to the end, you'll walk away with one million dollars. But this game, like the uncanny inhabitants of the Tansky House, might prove far deadlier than any horror you've previously imagined.

Balance of Fate is now being released in paperback form!

'A fool's quest,' they declared, shaking their heads in disbelief. 'Reckless and foolhardy,' said others, 'and one that will surely claim your life.' In any event, you have never been one to shy away from a challenge, and in this case, the lure of adventure and the promise of great treasure are just too tempting!

I have released a full version of Rulers of the NOW, a dystopian, near future, cli-fi black comedy. It is available in PDF so far and is Pay What You Want on Itch.

As a lowly temp for an insurance company, you dream that one day, your life will change. And one day, it does. You get charged with terrorism and stripped of all assets and social standing. Now you must navigate the dystopian world of England in 2041 to survive whilst the leaders of the New Order of Worlds, or NOW, enjoy lives of unlimited luxury, far away on their space station.

Will you ever discover why you were accused of terrorism? Will you survive as an outcast and will you discover who rules the NOW?

Keep the 3rd September free! This is when Fighting Fantasy Fest 4 will take place!

This will take place on the 27th August this year!

Titan - the guidebook to the Fighting Fantasy world of, well, Titan, is going to be released as an audiobook.

There is a Lone Wolf Club news release detailing what will be in the definitive editions.

Some insight in the business of selling a gamebook and how much you can make from Martin Noutch.

Ashton Saylor on the Streetfighter RPG.

Dave Morris has made 6 posts this month, putting us all to shame.

Are you a current or aspiring designer of narrative games? Do you love the characters and setting of Winnie the Pooh?  Are you tired of releasing your games, getting some encouraging downloads, but not getting enough feedback?

Then the Winnie the Pooh TTRPG jam is waiting for your submission!

A. A. Milne’s first book to feature these beloved characters has just entered the Public Domain. And what better way to celebrate that then by helping role-players experience their world first hand through role-play.

Deadline is the 30th June.

There are enough entries to run the competition this year. If you still want to enter, deadline is midnight GMT on February 1st (that's 1 minute after 11:59pm on January 31st). Voting will start a week or two after that.

There is an update for the Fabled Lands CRPG.

STOP PRESSES. There have been more updates recently:

There is a Kickstarter for a game for the Marching Order solo or co-operative game. It has not been launched yet, but you can sign up for updates.

Red Ruin Publishing will be releasing a 200 section solo Dragon Warriors gamebook by Paul Partington. Here is the back cover: 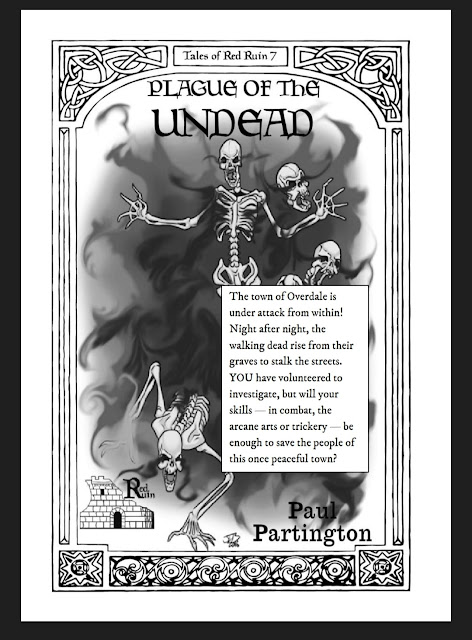 To Carry a Sword

This is a computer game which Richard S. Hetley is involved in. It will be released on February 14th.

Story-rich roleplaying game mixing interactive events, strategic planning, and real-time combat. Become the guard of a medieval caravan in a journey where the social connections you make are just as important as the money.

To Carry a Sword on Steam (steampowered.com)