When does combat get boring?

Hello all! Today, I want to talk about combat (or another test that requires an extended set of actions/choices) and how to have a system that does not make combat either too long or too short, contain no choice or too much choice to create overchoice.

The title is about combat as this is usually the activity where you crack out the dice and think strategy, but in some cases, non-combat situations are just as involved (such as the Jumpster Hopper book shttps://www.facebook.com/pages/J-P-Barnett/131451400230809 where you are either running away from or trying to catch something).

There are factors that are involved in the process. One factor is the amount of effort you need to go to to determine it. Are there dice rolls for both attack and damage? How many dice do you roll? Do you just pick a random number?

Another factor is the degree of choice that you have in combat. Is the combat pre determined by the author after you decide to enter it (hint - the results are never pretty in Knightmare)? Or are there a huge array of decisions that you could make in every round?

Both of these factors will affect the amount of time that the combat takes. I originally thought that the quicker the combat the better, but that is not necessarily the case. If you get really involved with the combat, then it won't matter that it might take time. It might be disappointing to find that combat does not take very long.

So what kind of combats are there? Well, we have really quick combats, such as in the Knightmare gamebooks, where usually, if you decide to fight, you turn to a sudden death paragraph.  Or, combat could be like the Virtual Reality series where you lose a certain number of life depending on your skills and items. These combats offer no options (in the sense that you make a decision during the combat. I don't count choosing the Swordplay skill as an option as you did that before the combat) and almost no involvement.

There are combats that have a lot of choice, but a low level of involvement. This sort of combat usually revolves around being given a set of  options where you have to turn to a section depending on what you want to do. The book then tells you what happens. The examples I can think of appear in books in special combats, probably because since they require a lot of sections, the book would be too involved if every combat needed several sections or there might not be many combats anyway. Examples include the Cyclops fight in Seas of Blood, the fight with Yaemon at the end of Avenger!, the fight with the Hydra in Necklace of Skulls and a few fights in The Coils of Hate.

Some combats have little choice, but a lot of involvement. Most Fighting Fantasy combats are like this, where you have to roll 2 dice for your enemy and 2 dice for you each round and usually the only choice is whether you use luck to increase the damage you deal or reduce the damage your opponent deals to you. In the worst case scenario, the skill difference is so high that the combat is a foregone conclusion and rolling dice is busy work. For example, in Demons of the Deep, you might get into a fight with a skill 6 stamina 16 statue. If your skill is 9 or 10, then you will probably lose about 2 stamina points. If you skill is 11 or more, you will be rolling 2 dice sixteen times, at least (remember that if your attack strength's are equal, then nothing happens and you have just done some die rolling for no result) to determine the small probability that you will lose 2 stamina points. The consequences for such an effort are very low. The aim of breaking combat into rounds means that the same combat would cause you different amounts of damage, which adds more variance to the same combat. This is an admirable goal. However, there is a limit to the amount of involvement I have to go through to achieve that variance. Is there a better way to do it? If not, is the variance worth the involvement? If you are playing an app that does all the busywork for you (or if you play on www.ffproject.com, which just calculates all the rounds in one go)

Contrast to Lone Wolf books where you only have to pick 1 random number per round and there is a possibility of dealing a large amount of damage or even automatically killing your opponent if your Combat Skill is much higher than theirs. Also, in Lone Wolf books, every round results in a change of endurance for at least one combatant.

Finally, some combats have lots of involvement and choice. For example, in the Way of the Tiger books, you usually choose whether to punch, kick or throw your opponent, then make a choice based on that. Sometimes you choose what type of punch, kick or throw you make and sometimes you may be able to use special skills. Then you roll a die to see if you succeed. Destiny Quest is the king of choice in combats. By the time you are completely kitted out, you have many special abilities which you can use. Combat is the main activity in Destiny Quest. 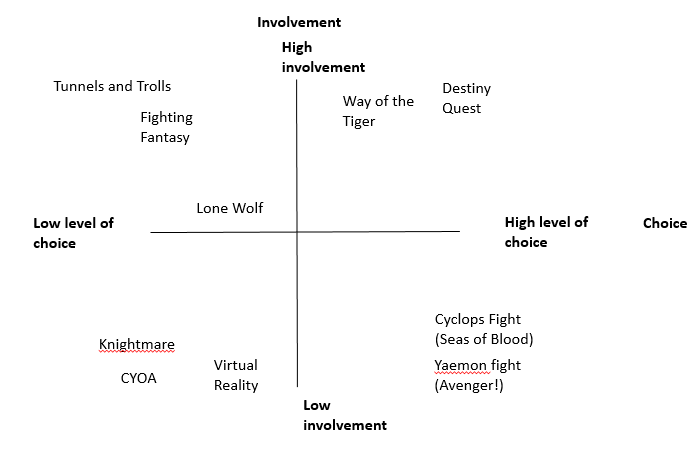 I don't think there is objectively much of a problem with any point. It depends on what I want at the time. Sometimes, I want to get through a story quickly and reach for a CYOA, but sometimes, I want to exercise my tactical mind and grapple with some probabilities, so I might grab Destiny Quest. I think the only one that  I would like least is low choice, high involvement. This means I would be rolling dice a lot, but not really having any power over the situation. I might get tired of this. Apparently, however, I am not the only one. When I asked Ian Livingston why there was no longer any skill score in Blood of the Zombies (like EVERYONE who met him that day), he replied that people no longer have any time for lots of dice rolls, so he had gone for a simpler system.

I might get tired of high choice, low involvement fights eventually, as they usually involve a set of pre-determined options. Once you have worked out the optimal path, there is no variance in the fight and so it will not be different.

So, I guess that there is no right answer to where you should go on the quadrant. However, I expect that there is a level of too much when it comes to involvement and choice, so the question I need to think about is - is there too much dice rolling here? Is it getting boring? In my first version of Isaac Newton: Badass Ninja Crimefighter, combat would go in rounds. However, I decided that there was too much involvement in that system and the variance was not worth it, so I reduced the combat to one ability roll where you lose more vitality if you fail. Sure, there were only 2 difference amounts of vitality that you could lose, but I had greatly reduced the number of rolls you needed. There is still choice - you can spend will points or use items to get rerolls.

I suppose the best I can do is to make sure I don't go too far in any one way and alienate a lot of people. It's quite hard, since a combat system might look fine on the surface, but particular combats might turn out to be too involved (for example, Fighting Fantasy combats have some tension when the difference in skill is 2 either way. Above this and it's too one sided).

What do you prefer in combats and other tests? Leave a comment!

Happy gamebooking!
Posted by Stuart Lloyd at 12:00 AM