Orphaned sections and their uses

Hello gamebookers! If you haven't already voted for the Lindenbaum competition, there are 16 days left, so please vote!

It sounds like orphaned sections wouldn't be needed. I mean, the whole point of a gamebook is to turn to sections, after all?

Nope, it turns out that there's lots of reasons for them.

To start the book

I suppose you are told to turn to this section at some point in the book, but not from another section. People have to start somewhere, both metaphorically and literally, so the start section has to be an orphaned section for this reason.

To make up numbers

You have finished your gamebook and it's 399 sections long. Maybe you like round numbers, so you stick in a short section that sounds like its something that someone would read, but it's unreachable. There, you now have 400 sections. This is actually true of Fighting Fantasy 1 - The Warlock of Firetop Mountain. Section 192 is an orphaned section.

Creatures in gamebooks like asking riddles with numbers as answers, which is very convenient because then you can just turn to the section that is the answer. You also have to state that if the section makes no sense, then it's the wrong answer and the return to the original section (or another section with a wrong answer). If you really want a particular riddle, but the answer is bigger than the largest section number or another important section is the answer, you could tell people to multiply the answer by 2 or add X or some other function.

To represent a word

Maybe your character needs to give a password or someone's name. Well, you can use that as an answer by doing the old A=1, B=2, C=3... trick. This way, you can convert a word into a number.

To prove you have an item

If you need 2 secret items, then you could add their numbers (such as in Siege of Sardath with the potions or the rings)

To find out what certain items do

If you have a mystery potion or other item in a gamebook and you want to increase the tension by not telling someone what they do, then you can tell them that they can find out the results by turning to a certain section. This is fun (for the writer) and tense (for the reader).

To find out what certain stat changes do

Some stats are significant if they reach a certain value (usually 0) and if they don't automatically mean death (which sometimes doesn't require its own section), then they will require their own section. To be fair, they still usually mean death, just a different kind of death (such as committing seppuku in Sword of the Samurai or running out of time in Slaves of the Abyss), but sometimes, they might mean something else has happened (such as reducing your Ferocity to 0 in Crimson Tide).

To find out what are in certain places

It can be boring having sections that constantly ask if you want to go left or right or open a door, so one way of saving sections for more interesting things is having maps with section numbers on them, such as in this map from Grailquest 3. 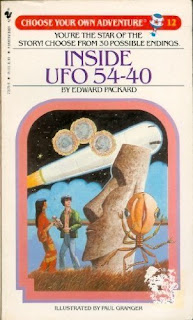 Finally, this little gem, Inside UFO 54-40, mentions that you cannot reach the end in any conventional sense and it is right. The winning section is an orphaned section that you can only read by flicking through the book. Cunning twist, Mr Packard!