An RPG you might need to take a bath after playing

In summer 2014, I decided to read a load of RPG sourcebooks for inspiration (although what inspiration, I'm not sure of).  Here are some of my thoughts...

Hello gamebookers!  Today, I present you with a free RPG that takes up 1 page - it is the 2d6 Quick and Dirty Roleplaying game rules.  I don't remember exactly how or when I found it, but I know it's been up for a few years.  For some reason, it stuck in my mind.  I think it was because I was a poor student at the time and wanted some free sources of entertainment.  And, thinking about it, it is halfway to being a gamebook system.

The core mechanic is this - ability tests are made by rolling 2d6 and trying to achieve 8 or more (the number could be higher if the task is harder).  Each hero has some traits that may give a +1 bonus to the roll if they are relevant to the test.  It is up to the player to decide what traits they have (as long as they fit in with the genre and that they are not too powerful, such as "immortal").  They also get a title and some quirks.Opposed tests are done by both parties rolling 2d6 and adding a value based on their traits and also items.  The loser uses the ability to use 1 trait temporarily (ranging from getting it back as soon as combat is over to recuperating for some time, based on whether the combat is a sword fight or a game of chess or something in between).  The loser ends up with no traits (and this could lead to a vicious cycle where, eventually the combatants lose useful traits and so roll lower numbers and lose more).

And that's the whole RPG.  I think it is halfway to a gamebook system because of its simplicity.  It seems that simple systems are the way to go according to Dave Morris (who is known to rankle at the idea of having to use maps in his Blood Sword books) and Ian Livingstone (who scrapped skill and luck in Blood of the Zombies).

The half that is not provided is the list of traits that you might need.  It is OK to more open in RPGs as the players' source of feedback is a living person with enough imagination and ingenuity to respond to what the players might come up with.  However, with a gamebook, the author is not there and so your options are the ones that the author thought of at the time of writing, so there is not point in thinking of anything else.  So in that case, the author needs to think of traits that would be useful for the problems that they have presented.

Another thing the system needs is a "hit point" system for characters.  I am not a fan of the rule that characters lose traits in opposed tests, because, as I mentioned above, it sets up a positive feedback loop where the loss of one trait will reduce the chance of the character's survival, which will lead to the loss of more traits which will further reduce their chances, which will eventually lead to death.  In order to keep it simple, these 'hit points' could be a representation of mental and physical fortitude (as the opposed tests could be anything from combat to having an argument).  These points could either be restored straight away or after some time.  That way, for the most part, the only danger the hero needs to worry about is the current one.  Destiny Quest does this well, where everything is restored after a combat.

One last thing that I think they could improve, though this is by no means a necessity, and, unless you care about statistics as much as I do, you probably won't care, is that I think 2d6 gives too large a bell curve of results, making a bonus too important.  I can explain what I mean if you use anydice for a 2d6 roll.  Rolling an 8 or more has a 42% chance.  If you have a +1 bonus, you need to roll a 7 or more, which has a 58% chance.  That's a 17% increase for 1 point.  However, after that, you start to get diminishing returns.  If you have a +2 bonus, you have a 72% chance (14% increase) and a +3 bonus gives you an 81% chance (9% increase).  Ages ago, I showed you that if you were having opposed checks and the opponent had a +3 bonus over you, you were pretty much doomed.  That is because the fewer dice you use, the more impact a bonus would give.  I think people use 2d6, because most non gamer houses have that many maximum, but more dice would be better.  Too many would mean too small an effect, however.  for my system, I settled with 4d6.

So, what can I take from the Quick and Dirty system?

Posted by Stuart Lloyd at 9:30 AM No comments:

It's a great time for gamebooks

Songs of the Mystics is out. Hooray!

Asuria Awakens is out! Hooray!
Posted by Stuart Lloyd at 9:14 PM 1 comment: 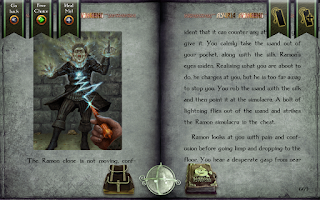 Hello gamebookers! It is a great time to be a gamebook fan at the moment.

First of all, the Windhammer entrants have been announced and there are 16 books this year. They will be made available on September 17th and voting will go on until 14th November. The winners will be announced on November 21st.

Also, Tin Man Games have released Songs of the Mystics and my own book, Asuria Awakens for Android!!!!

I am so pumped that my gamebook has been released, and what is more, that Tin Man Games turned it into an awesome app with excellent art by Tony Hough.
Posted by Stuart Lloyd at 9:21 PM 7 comments: