Gamebooks news round up!

In almost two years of regular blogging, I don't think I've ever written a post which included news of more than one gamebook event so I consider this round up post as an important signal that gamebooks are BACK.  So, without further ado, I will give you the news.

I'm publishing a day early this week because I'm talking about current stuff and I have a busy weekend ahead. 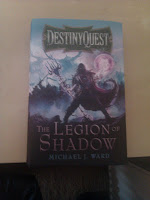 The new edition of Legion of Shadow is out in both hardback and paperback with a new cover and great extra quests.  I reviewed the book when it first came out and everything I said then still stands and now it has bells on it.  If you want to know more on the Destiny Quest experience, its author, Michael J. Ward has published interviews with some Destiny Quest fans including yours truly and Scott Malthouse and also a peek at the cover of the second Destiny Quest book, to be released in November - The Heart of Fire.

If you have not enjoyed the Destiny Quest experience yet, get the new edition in hardback or paperback.

In case you haven't heard, Blood of the Zombies, by Ian Livingstone will be released this August to celebrate the 30th anniversary of the release of Fighting Fantasy.  It will be great to see another Fighting Fantasy book back in print.  And also in digital format!

Tin Man Games, creators of the excellent Gamebook Adventures series are doing Blood of the Zombies in digital format!  I learned this from the Tin Man's new newsletter which you can sign up for here.

Also, keep a close eye on Fighting Fantazine as a new edition will be out any time now!

These guys are involved with so many of the other news stories that they deserve their own.

As well as releasing Fighting Fantasy and Windhammer books, they are also working on their own stuff such as a Judge Dredd!  Gamebook Adventures for Android!  A new newsletter!  And much much more to come!

When it comes to electronic gamebooks, the Tin Man is the lore.

Fabled Lands!  Way of the Tiger!

These two iconic gamebook series are also to be released in digital format, mentioned by Dave Morris in this interview.

Dave Morris's latest release of interactive literature is an interesting spin on the classic novel where you influence the decisions of Frankenstein.  It is available from Apple and you can read about it in more detail here.

Scott Malthouse has released en excellent new Tunnels and Trolls solo, Thornguard  which has a distinct Fabled Lands feel.  It is set in the biggest city of Peakville where you can become a thief, city watch member, merchant or initiate into a religion.  There are also all kinds of crazy adventures that you can get into in the city.  You can buy Thornguard as a pdf for £1.26 or as a physical book for £3.50.

There is also a new TnT blog out with the aim of releasing micro solos.  There is currently one micro solo on there at the moment, but look out for more.

Tweet RPG is running Hack N' Slash Hero - a gamebook in Twitter form.  Go and vote on your character's choices.  To learn more about Tweet RPG, check out its blog.

Here's some news from Billiam Babble (whose blog is awesome).  Black Library has released another Warhammer Gamebook, Beneath the City of the White Wolf.  This gamebook is in a Fantasy setting as opposed to Hive of the Dead which was in a 40k setting.

Billiam also directed my attention to this post that tells me that Jonathon Green is publishing a vampire based gamebook.  Exciting times indeed!

Shane Garvey, author of QUERP and the Fabled Lands RPG has released a new blog full of interviews with people in the gameing industry including people involved with gamebooks such as Dave Morris, Andrew Drage and Scott Malthouse.  I also had the privelige* of being interviewed.

There are also many gaming greats including Margaret Weiss, one of the authors of the Dragonlance series.

Remember that entries to this excellent competition open in August but you can still start writing now and this year, the winner will get their book published by Tin Man games!  For some guidance on how to get started, go here.

*This is the first time I managed to spell it correctly without looking it up.  Hooray!
Posted by Stuart Lloyd at 9:22 AM