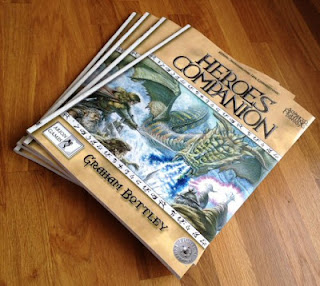 Before you read about this delightful little nugget, have you funded YOU ARE THE HERO yet?

How about GOBLIN'S BOUNTY?

Excellent.  Then let us begin.

Back in April 2011 (wow, that wasa long time ago), I published a wishlist for the 2nd edition of Advanced Fighting Fantasy.  Most of my wishes were granted, but it looks like the Heroes' Companion, the latest addition to the AFF2 collection will grant some more of my wishes and more with its simple yet versatile system.

I picked up this book at Dragonmeet but it will be available online in a few weeks.  Here is a run down of its contents.

This allows the players to have more options when building their heroes.  Most of the new skills are skills that more experienced heroes will want to learn when they move on from exploring dungeons for gold to spreading their influence across the world, such as battle tactics, leadership and stewardship.  There are several more advanced types of magic to learn and talents that make for more interesting heroes.  The templar talent allows you to create a paladin type hero, which fills a gap as usually, creating a warrior with some magical ability in AFF required a lot of XP to do both well.  Now, with talents such as templar, second sight and clearsight (which allows heroes to identify illusions), combat focused heroes can supplement their talents with a little magic.  There is also a magic resistance talent, a talent for leadership and a talent that negates your opponent's attack if it is the first round of combat.

This also offers plenty more options for players and also for directors to create NPCs.  There are several new magical types.  Tattoo magic is a great addition and also a nod to The Riddling Reaver.  Necromancy, conjuring and chaos magic will allow the director to create interesting NPCs and villains and battle magic will allow the heroes to take on whole armies.  I was glad to see that battle magic spells cost a lot more than normal spells to reflect their large scale effect as it seemed a bit wrong that in Allansia, creating a hail of arrows cost as much stamina as a couple of lighting bolts.  However, the rules allow the battle mage to use magic points from assistants so they do not have to sink all their XP into getting tons of magic points.

We also have more detailed instructions on making magical items, something the first edition AFF covered with a confusing description of a spell that cost 6 stamina in Blacksand.  Here we have a special skill for enchantment along with costs in terms of money, time and magic points.  The method does not cover every specific item so calculations need to be made but it has enough examples for a director to make an educated guess.

We then have a chapter on hirelings which gives rules for heroes to buy services of NPCs quickly and simply.  This allows the players to move on from a ragtag bunch of adventurers to people who can interact and grow in the world of Titan.

Speaking of growing in the world, this chapter provides simple rules for owning a domain and making money from it from a small farm to a huge country.

Here are new rules for mass battles.  They are like an amalgamation of the complex and basic rules from Allansia! but they are more versatile covering units in the 10s, 100s or 1000s and also including heroic combats.  There are also rules for siege engines, buildings and standard bearers.  A lot of the mass battle rules needed more elaboration and these have done so without making them more complex.

This chapter covers the creation of a wilderness using a similar method to the dungeon generator from the first book (throw six sided dice on a piece of paper, draw a map based on where they land and assign the type of wilderness based on the number thrown).  There are also descriptions of hazards and encounters in the book.

Finally, we have some nasty afflictions that the heroes pick up, which also include a few nods to Vault of the Vampire. These afflictions are meant to create some interesting problems for the character and a hook for an adventure.  For example, curse of the warrior reduces a hero's skill and stamina if they fight, so they will have to find non violent solutions to their problems.

So there we are.  Graham Bottley continues to expand on the AFF2 system whilst at the same time making it  simple yet versatile.  This is not a system for those looking for hardcore realism.  It is more for people who want a fun game without being bogged down by too many rules.  Keep an eye out for it when it finally arrives  on the digital bookshelves.