First of all, apologies for the lateness in my post.  I always try to get them out on Sunday and most of the time, I achieve this by bulk writing posts when I have the time and then scheduling them.  However, this one could not be scheduled as it was about the great experience I had (and gained) from Dragonmeet 2012, where I met up with lots of gamebookers and other great people in the gaming community.

I met up with Emil before the convention to  have a little discussion about Goblin's Bounty, which is coming along very nicely.  I also had a demo for people to play at the convention.

We bonded over our mutual love of Terry Gilliam and manga and he told me some very interesting stories about his illustrations, which are awesome.

If you want to see more of his work, you can view his black and white drawings here and his colour illustrations here.

I was also approached by Sam Richards of Tweet RPG fame  and we had a good chat about where he wants to take his innovative marriage of gamebooks and Twitter.  I'm looking forward to what is coming up.

I then headed over to the fighting Fantasy stall, noticing Michael J. Ward selling his new Destiny Quest book and made a mental note to talk to him when he wasn't being surrounded by enthusiastic customers.

It was all happening at the Fighting fantasy stall - Steve Jackson and Ian Livingstone were signing their adoring fans' Fighting Fantasy books (including mine - thankyou!) whilst the Warlock was selling a variety of Fighting Fantasy merchandise and trying to keep up with the demand.  The Tin Man and Jonathan Green were also there for a chat.  It was gamebook central.

The Fighting Fantasy stand was not the only one that had all the gamebook goodness on it, however.  I also visited the Arion Games stall where Graham Bottley was selling his latest addition to the Advanced Fighting Fantasy RPG - the Heroes' Companion with its simple yet flexible rules for managing domains, mass battles, wilderness creation, curses, more types of magic and much much more.  Copies will be available from Cubicle 7 in the next six weeks or so, so stay tuned!

Although it was only 2pm at this point, I was approached by Michael J. Ward who had closed his stall down because he had actually sold out of the Destiny Quests that he had bought with him.  It was great to finally meet Michael who had created the Destiny Quest series.  I was glad to hear that there is a third book in the works, planned for late 2013.  Until then, you have the Heart of Fire to beat.

The day went too fast but I also managed to squeeze in a game of Lords of War, a card game where fantasy races battle it out.  It was a close and enjoyable game, so I'm glad I played it.

It was an excellent day and I heartily look forward to next year's Dragonmeet.  I have plenty more posts to write about the day, such as a review of the AFF2 Heroes' Companion, Destiny Quest 2 and new projects from various people.

In the mean time, check out the Tin Man's 12 days of gamebooks and updates from YOU ARE THE HERO, the title of Jonathan Green's history of FF blog (also on Twitter) and back Goblin's Bounty to make it even better!

There's plenty to do in the world of gamebooks, so get stuck in! 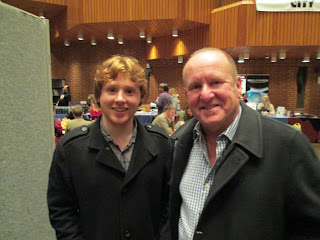