Wow, gamebookers!  Lloyd of Gamebooks turns 3 on the 27th August (and, coincidentally, Fighting Fantasy turns 31 on that same day) and so once again, I will look back over the last year and see what's gone on in the world of gamebooks, and it seems like the world of gamebooks has expanded beyond what anyone could have imagined.  Let's break this down into different parts:

My stats are starting to show a pattern now where there is a peak in April due to the April A to Z﻿ and then there is a drop in views.  I think this every year, but I really think that I've peaked on the pageviews on this blog without putting any serious time and/or money into talking more on the blogosphere and tidying it up. 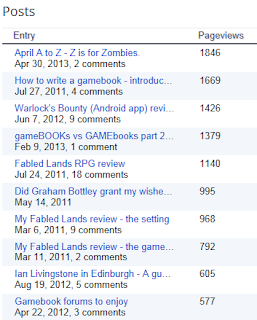 Here are the most viewed pages.  As with previous years, a lot of reviews are popular as well as how to write a gamebook.  However, I have no idea why Z is for Zombies is the most popular post, beating everything despite only being on this blog since April 30th 2013. 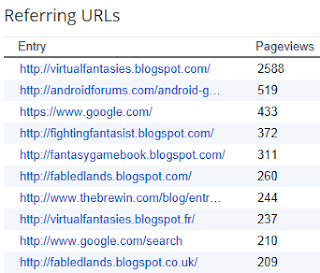 The most common links come from the Android forums about Goblin's Bounty and then from other gamebook sites - Fighting Fantasist, Fantasy Gamebook, Fabled Lands and The Brewin.  I'd just like to thank these people and everyone else who has brought traffic to my site.
The Gamebook Feed is still around (and if you want your blog added, give me an email at sl1605@gmail.com) but Lone Tiger has not had any updates for a while.  I would like to continue with that but I think that is lowest on my priorities at the moment.
I also enjoy being on Twitter, particularly to hang out with my buddies David Walters (who is gradually taking over the gamebook world here and here) and Scott Malthouse whose USR system is taking off.  Just like the blogs, I don't think I can get more followers unless I put lots of effort into it.
﻿
﻿
My writing

Since last year, I have written my 2012 Winhammer entry, Call of Khalris, and  then embarked upon three larger projects that have yet to be released yet, which is why you haven't seen any Tunnels and Trolls solos (but I have a couple that I would like to write) or the complete Rulers of the NOW (which I am kind of glad that I didn't finish because I am better now and I think I might do it justice).  My writing has involved writing The Ascent of Darkness for Fighting Fantazine 11, finishing off Goblin's Bounty, and writing a gamebook for the prolific Tin Man Games.  I will then be writing a gamebook for Adventurer and then I will think about works of my own.  I have also written a short gamebook for the 2013 Windhammer Competition (get yours in by September 7th!) as I always enjoy the feedback that I get from fellow gamebookers across the world and a few resources for Adventurer.  So not much writing from me this year that has been released, but that is because I am saving it up for later.  Hopefully, we will see the fruits of my labours in 2014.

So I am also the news editor for Fighting Fantazine now, which, under Alex's editorship, is going from strength to strength - issue 11 has been printed out.  It's also great to see how the number of releases and the amount of gamebook news has exploded - just have a look at how many pages of news there are in each issue - as a sample, there are 2 pages of Omens and Auguries in issue 1, four pages in issue 6, seven pages in issue 10 and nine pages in issue 11.  It has turned out that there are actually tons of gamebooks and gamebook writers out there and that both gamebook apps, electronic gamebooks and physical gamebooks are enjoying a massive resurgence.

Things have been moving fast for me since I started this blog - in 2011, I got married and then, later on, I had a baby.  This, coupled with all the gamebooks I have had to write, has meant that I have focused less on the blog - this year, I have barely released any more posts than once a week and every day in April.  However, there are several more gamebook blogs now, as noted by The Gamebook Feed (if you have a gamebook blog and it is not on there, email me with a link at sl1605@gmail.com or leave a comment and I will put it on there).

What have I learnt from this year in gamebooks?

This year, I have learnt to be a lot more organised in my gamebook planning and writing.  At the beginning of the year, I have three massive gamebooks to write, which I predict, when I have finished, will amount to about 250000 words of gamebook.  Having a massive target like that was off putting at some points and stopped me from doing anything, so I just decided to spend about 20 minutes a day, doing some and I was surprised at the progress I made - I also got really into the writing and spent a lot more time on it some days.  The good thing with this method was that it seemed like I was taking no time out of my day when I was doing the writing, but when I would look at my progress over a week or so, I could see quantifiable results.

Also, before all of this, I used Dia to organise and flow chart out the gamebook before writing out the summary of each paragraph.  This meant that when I was writing, I was just writing and not concentrating on what choices there should be etc.

Another thing that has helped me is my iPod Touch which has both a notepad program and a voice recorder.  I have spent several hours writing notes on various gamebooks in my iPod Touch and also having conversations (and sometimes arguments) wit myself about what to write.

A combination of all of these has lead to me being more organised.  In future, I will try out Crumbly Head Games' GameBook Authoring Tool (GBAT) which incorporates both a flow diagram and then converts it into text, which would skip the process of me copying it from Dia (as a side not, the free version lets you write 100 paragraphs max and then converts it to Rich Text Format, which is perfect for Windhammer).

So yes, this year, due to having masses of things to write, I have learnt to become more efficient in my writing.

I have just had a thought over the past day or so too.  The jobs I got writing gamebooks were over social networks where people where looking for gamebook writers.  I then thought to myself whether there are lots of people who would like someone to write a gamebook for them, maybe for a game or franchise that they have.  I was also wondering whether the large number of amateur gamebook writers out there would also like to advertise their services.  I would love to, but I have too much to write already, so I think other people should be advertised.  So I've created the gamebook noticeboard where people can advertise whether they want gamebooks written or whether they are willing to write gamebooks.  If you want to be put on it, email me at sl1605@gmail.com.

The future is a bit uncertain.  My life has taken a dramatic shift in the past year - baby, new job, people asking me to write gamebooks for them and becoming news editor for Fighting Fantazine.  With all these responsibilities, its less likely that I will be making tons of extra posts on the blog (but I will be sticking to one a week at least).  It's like I've stopped treating the world of gamebooks like a playground started taking responsibility for stuff.  Once I've completed the gamebooks I have been given to do, I would like to kick back for a bit and just write my own to put out there, but we will see what happens.
Posted by Stuart Lloyd at 12:00 AM