Legend of the Shadow Warriors playthrough 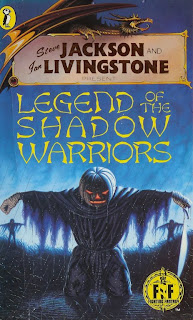 This was another one of the very first Fighting Fantasy books I played. Legend of the Shadow Warriors was one of the darkest ones I remember, although that may be simply because I was young at the time. I remember the story being rather nightmarish and ghastly, so I'm keen to see if it lives up to my memory.

I also recall this as being the first gamebook I couldn't win even by cheating. The titular Shadow Warriors were nigh-indestructible, and would always wind up overwhelming me in the end. Maybe that's why I remember it being so terrifying. The cover itself always creeped me out, a few levels more than the House of Hell cover... so yeah, this is my Halloween post! Enjoy!

One thing I do notice is that this adventure seems to incorporate an armour system. This is a nice touch, as it will hopefully diminish some of the damage taken. The armour itself has a level of hits it can take, so that replicates the idea of the armour degrading over time.

The adventure starts by giving us a bit of an exposition dump, telling us a bit of history that reminds me a little of Creature of Havoc, but more brief and to the point. It doesn't mention the Shadow Warriors though - the only reference we get to those is when a poor villager comes to ask me (the mighty adventurer) if I will help protect them. We're then informed that these titular Shadow Warriors are sinister boogymen that are nothing but myths.

Nevertheless I agree to help the villagers, and am about to leave the comfort of the local tavern when I meet the city's most infamous gambler. He challenges me to a game of dice, which I quickly accept. I win, only to notice that he has cheated by using loaded dice. I take his dice, and throw him out of the tavern, loudly proclaiming him a cheat.

I head to the market in order to stock up for my adventure, buying some provisions, some firecrackers and a mirror. Midway through my shopping, I am stopped by a short well-dressed man, accompanied by several city guards. He loudly proclaims that he is the tax inspector, and demands that I pay upwards of 500 gold in back taxes. I don't even have a home, and have only pennies to my name, and he still wants me to pay excessive taxes. This, ladies and gentlemen, is what happens when you vote for the tories!

So I do what any self-respecting, law-abiding citizen would do in this situation - I kick the tax man in the knees and run for it.

As I sprint down one of the alleyways, I start to wonder if this is the kind of adventure that my character had in mind when he first picked up his sword. Surely this is more of a 'mis'adventure. I do run face-first into my gambler friend and two thugs, who are wanting revenge for having humiliated them earlier. I'm in no mood for playing games, so I stab them repeatedly (hey, if I'm being chased by the guards for tax evasion, resisting arrest and assault, may as well add manslaughter to the list) and run into the alleyways.

Growing desperate, I dive into the sewer system. As we learned back during my adventures in Khare, the sewers are a happy place, filled with joy and fun. Or giant monsters made of poo. In this instance, you can guess what I find in the sewers. If your guess is that I find a giant monster made of poo, congratulations, you're king of the obvious. I chuck a firecracker at it and run like buggery.

The whole silly debacle ends with me escaping from the city on the back of a rubbish cart, eventually to meet up with the villagers on a highway pass. As I do, we are beset by none other than the five Shadow Warriors themselves - ghastly monsters much like the nazgul, but wearing silver masks and robes. Strange, I remember them looking like the monsters in the cover. Maybe my youthful mind got mixed up. Any way, they decimate the entire group of villagers, stab me in the knee, and leave me for dead.

But I do not die. My hate sustains me. Well, hate and provisions.

I head to the home of a wise hermit, who is sagely in the ways of such things. Two things I know about the wise hermit - the first is that he is a hermit. The second is that he is wise. The third is that he lives not far from a well, where I am assailed by a dandy highwayman. He tries to take my cash while looking flash, I kick him in the shin and finish my drink of fresh well water.

Eventually I manage to arrive at the hermit's cabin, where he tells me the tale of the Shadow Warriors, servants of the dread god-monster Voivod. As he tells me the story, there is a knock on the door. "Let me in" says the visitor, "I am your son". But it cannot be - for the hermit's son died some years before! I knock the hermit on the head until he quits this whole Monkey's Paw debacle, and the monster at the door gives up and goes home.

The hermit then tells me something very useful - that if I rip their masks off, the Shadow Warriors can be defeated. I suspect that this is valuable information. I thank him and head out on my travels, opting to cut through the fields rather than stay on the roads. Along the way the atmosphere of the game really starts to ramp up, with dramatic thunderstorms rolling in, lightning striking the earth, and some very creepy trees trying to kill me.

I know that normally, trees aren't as horrifying when they're attempting to kill you. But I'm wielding an axe that I picked up in the city - of course! An axe is the natural enemy of a tree! So I make short work of it without too much trouble at all.

As I stumble through the fields, I encounter a strange voice in the winds, a rustle of the leaves. The avatar of the wilderness, a demigod by the name of Jack-in-the-Green (who, being the incarnation of the forces of nature, will hereafter be referred to as the Swamp Thing), speaks to me and asks that I be his champion in defending the world from the evils of the Shadow Warriors. This is a really nice touch. It's a bit abrupt, but the inclusion of this type of anthropomorphic earth-god deity adds a lot of the mythical atmosphere to this game. I'm not even sure if I got this sequence in my playthroughs of this adventure when I was a kid. The character really came as quite an interesting surprise, and incorporates quite a few of the elements of the 'Green Man' style. If you're interested, there's a decent page on this on https://en.wikipedia.org/wiki/Green_Man

I've mentioned the atmosphere a few times so far, and really it's around this point in the book when you really start to pause and appreciate it. I don't remember if the prose actually specified, but you end up picturing the entire next few locations as occurring entirely at the depths of night, possibly in the rain as well. It's such a little thing, but atmosphere really is so very important. Like in horror movies (although that's a very blanket statement, given how terribly bland some horror films can be). Just, whatever you do... don't go and watch Paranormal Activity 4, okay? I studied film at university for three years, these films are a banal, tedious, insipid, not remotely scary, and are an insult to an artform that I love. If you really, really want to watch it, you can enjoy entirely the same experience by staring at a pair of rich douchebag white people sleeping for hours on end, climaxing in screaming at a closing door. Do not pay to see these films, the people who are making them do not deserve your money. If you want to watch a film this halloween, get a copy of Dario Argento's 'Suspiria'.

Eventually I stumble into a town, to find that it is here that the monsters on the book's cover make their appearance. The pumpkin-headed entities are the constructs of a witch who is laying assault to the town, for no real reason other than to cause strife and chaos. I kill one of these creatures (who remind me of the disturbing pumpkin-headed thing in the movie 'Return to Oz', which is surely a precursor to both Jack Skellington and the Slender Man) without too much trouble.

Soon enough I am over-run by them as I try to sneak into the witch's makeshift tower, and am dragged into her study. She explains that she is no simple witch, but is in fact a type of undead called a wampyre (like a vampire, but a bit more effete). She boasts about her fantastic power, and I tell her that if she is so powerful, she should try freeing her pumpkin servitors. She does, and they promptly chuck her into the fireplace.

In gratitude, Swamp Thing teleports me to stonehenge for a while, where a large number of mythological figures sit around in merry avalon-style frolics. The great horned god gives me a powerful spear of instant-death, and tells me that I can use this to defeat Voivod. This entire sequence is very nice, with some lovely and imaginative characters, and definitely ranks highly in the level of creativity it shows.

I am returned back to the mortal realm, and push into the next part of my journey (I have no clear destination in mind, so I'm just wandering from place to place). I manage to wander right head-long into a troupe of orcs, who kidnap me and force me to work in their kitchen. For a bit of a laugh, I tell them that I'm actually a spy from their enemies. They don't have much of a sense of humour, because they promptly kill me. Which means I don't need to work in their kitchens any more, so it's not all bad.

So yeah, we come to a rather undignified end to this adventure. But curiously, I feel that I've been making a lot of right turns along the way too. Finding the method on how to dispatch the Shadow Warriors was a real strong hint, and acquiring the spear weapon was very portentous, hinting that I was on the right trail with those ones. Maybe if I'd have just been able to keep my mouth shut around the orcs, I'd have even managed to win this adventure!

I'm really impressed with this book. The atmosphere is very immersive, the sense of mythology and characters is excellent. You spend so much time meeting new and interesting characters that you quickly get involved in the story, which is not as insanely difficult as I remember it being. I've taken quite a fondness for this book. It's not your traditional Halloween gamebook, maybe you might prefer House of Hell, Vault of the Vampire, Blood of the Zombies, Howl of the Werewolf etc, but this one really fits for me, so don't count it out either. Give it a shot, eh? It really is very cool.