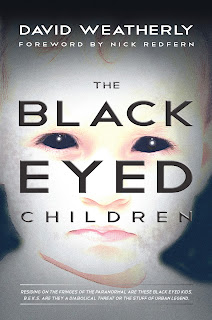 A typical black eyed children encounter involves a ragged child approaching an unsuspecting person, usually at their house but also on the street or in their car.  They usually do not answer questions but they usually ask to be invited in.  People have reported feeling as if they are being hypnotised by them an also think that the black eyed children have some skill in telepathy.  It is at that point that the victim notices that the child's eyes are completely black and feels an overwhelming sense of terror.  If the victim flees the scene, or closes the door on the child, returning to that place will reveal that the child has vanished.  Encounters with the black eyed children are often accompanied by smells of decaying flesh and the victim may experience upheaval in their life afterwards.  Being touched by the children usually results in illness that won't go away.

Some people have turned to religion after their encounters and black eyed children have not been known to approach members of the clergy.  Black eyed children will try to avoid combat.  If someone does not willingly let them in then they will usually try to teleport away.

WEAPON:  Diseased touch:  Black eyed children are unarmed, but if they touch a living creature or inflict any damage upon them, that character will develop a disease within a week.  The black eyed children touch anyone they fight who does not kill them in one round.  This disease will cause them to lose 1 skill point.  Curing the disease will only last a week before they contract another disease which will reduce their stamina by 2.  If that disease is cured, then after another week, the character will contract the original disease that reduces their skill by 1 again and so on.  This process can only be stopped by a priest who has a devotion of at least 10 casting a bless spell on the character.

Planeswalk: Black eyed children can move between their realm and the material realm. This requires 6 magic points and 10 minutes of preparation time.

Holy weakness:  The magic, misfortune ability and the diseased touch of a black eyed child does not work on any character who has the Magic-Priestly skill or the Templar talent and follows a good god.

Banishment:  black eyed children can be banished back to their realm if certain gods or spirits are invoked but this is difficult.  Only a character with either Religion Lore and/or the Secret Signs skills can do this.  They must make a check which can use the bonus to Religion Lore and Secret Signs.  Priests of good gods get a further +2 bonus.However, there is also a -4 penalty because it is very difficult.  If the player succeeds, the black eyed child is banished.  If the player fails, then they are affected as if they had had the fear spell cast upon them (but they do not lose luck).
Posted by Stuart Lloyd at 12:00 AM