Good day to you all, gamebookers!  I am hoping that you are having an enjoyable summer (or winter
if you live in the Southern hemisphere).

Today, I've got some exciting snippets of news that I came across whilst getting then news together for issue 12 of Fighting Fantazine out later this month, but there are some things that just can't wait that long, so I might tell you about them now.

It seems that gamebooks and interactive fiction are doing very well on Kickstarter, with most projects being funded, some well above their targets.  Well, there is currently one project running, called Codename Cygnus where you play as a secret agent, where instead of reading about your choices, you listen to them in old style radio fashion.  As of posting, there are 7 days left on the kickstarter and the team have raised almost $8000 of their $11000 target, so it is reachable.  Why don't you have a look at their lovely Kickstarter page?

There is a new gamebook series out entitled Your Adventure Begins Here.  There are currently two books in the series, The Renegade Wizard and Dragon's Deep, written by Ashley P. Martin.  You can buy them both as paperback or for Kindle, so why don't you have a look at his lovely website?

EDIT:  How could I forget the Windhammer competition?

You only need to write a gamebook with a maximum of 100 paragraphs (so anything less is also valid), so even if you have not thought of one yet, you still have time to plan and write a short gamebook.  You  can have a look at the guidance I wrote last year.

Since I wrote that post, there is a new gamebook creation program around, the Gamebook authoring Tool from Crumbly Head Games.  This program allows you to write your gamebook as a flow diagram before randomising the paragraphs and then publishing it.  The free version allows you to write a maximum of 100 paragraphs and turn it into a rich text format gamebook (tailor made for entry to the Windhammer competition) and if you love it so much, you can use some of your winnings to pay £39 for the pro version and write an even bigger gamebook to publish and earn yourself tons of money (it's a little known secret that interactive fiction is probably the most lucrative way to make a living since the beginning of time).

Even if you don't win, the feedback you get from the Windhammer community, made up of writers, gamers and gamebookers, is extremely valuable and it is well worth entering just to get the feedback for your entry.

So enter.  There is still time. 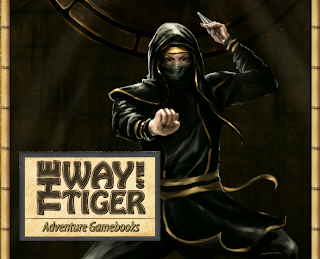 Yes, gamebookers, it's true.  Those lovely people at Megara Entertainment who produced the fantastic and gorgeously produced Arcana Agency are now going to make some gorgeously produced Way of the Tiger books!  But that is not all, no, no, no.  The series will expand with a prequel written by awesome writer and knower of all things ninja, David Walters.  Also, if the stretch goals are reached, we will also get book 7, which will finally resolve the cliffhanger which left Avenger in a sticky situation.

Megara will be launching a kickstarter in October so start saving up your pennies for something I'm sure we can all get behind.  If you want to see what they have planned for the series, you can go to this page where you can download a 100 page preview of Avenger and also take a look at the Kickstarter page that they plan to release here.
Posted by Stuart Lloyd at 10:09 AM