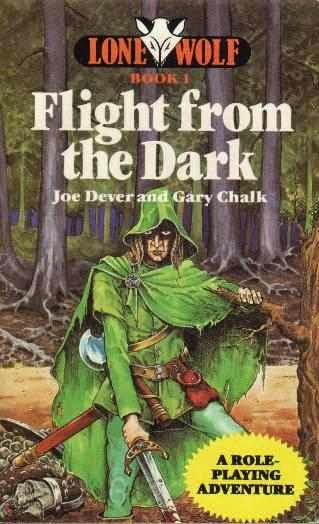 "Flight from the Dark", written by Joe Dever, illustrated by Gary Chalk.

Our adventure begins, as I'm sure we are all aware, with the destruction of the Kai monastery by the armies of the darklords. You are the sole survivor, etc. You, doubtless, know the story and how it begins. So let's dive right in to rolling up our titular character - Lone Wolf.

Character generation is remarkably forgiving on me, for a change. I have a decent 17 for my combat ability, equal to about a solid 10 for Fighting Fantasy's skill points. I have rolled endurance of 25, which would be equal to roughly 15 stamina points.

Kai disciplines are the core magic type of system in the Lone Wolf series. You pick five in this adventure, and gain more as the series processed. The five that I have selected here are - hunting, healing, sixth sense, mind shield, and animal kinship.

I start the adventure with an axe, probably the same one that Lone Wolf was using to cut firewood when the evil army attacked. In addition, I have 4 gold coins, one meal, and a quarterstaff. 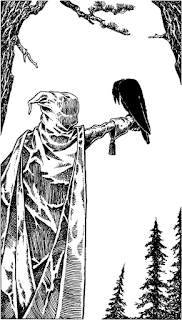 This is the part where I would normally discuss the adventure back story, but it's relatively sparse in this book. The seeing is a traditional fantasy kingdom, you are a monk ranger type of a chap by the name of Silent Wolf. The land has historically been benighted by the terror of a group of lords of darkness called, surprisingly enough, the darklords. One morning, while Silent Wolf was out gathering firewood, the evil army invades and burns the monastery down, killing all your friends and adopted family. Impressively enough, this means that the entire Kai order has been massacred, because they were all in the monastery at the time enjoying the festival of big dinners. You are now alone - Lone Wolf.

So, let's get on with this, then. Our route is clear, we need to go and see the king, who will... Ek... Do whatever kings do in this situation. Raise an army or something. I start off, trudging through the forest, avoiding the energy orcs (called Giaks in this series) until I eventually run into a wizard. He is fending off a group of the giaks, and I help him out by hurling a rock at one of the buggers. Just call me Lone Hobbit.

Our wizard here is Banedon, and he has been sent here to tell the Kai about the army that are coming in our direction any moment now... Oh, woops, he arrived a little too late, ehh? Still, he gives me the symbol of his brotherhood, the pendant of the crystal star, which is bound to be useful. He also tells me that his order was betrayed by within - one of his below mages, Vonotor, betrayed them. I'm sure we'll see more of him again, probably two books from now. Anyway, I really like Banedon, and genuinely hope to see him again soon. Let's hope he appears in a future book (possibly Lone Wolf book 34: Wrath of the Rock-Throwing Wizard) 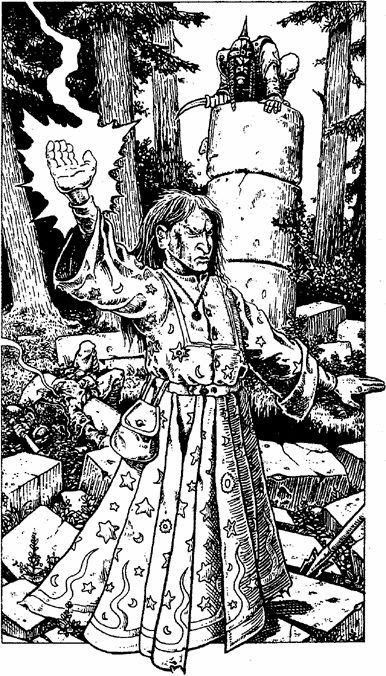 I stumble through the forest for a while until I'm chased by a pack of giaks. Attempting to his in a cave proves no use, as they find me and I have to fight two of them. They're not too tough, and I managed to find some gold in the cave for my time.

After meeting an old hermit who lives in a tree and gives me yet another weapon that I don't need because I have my axe, I stumble upon a hill. There is a tunnel through the hill, and a memory from childhood stirs. I remember that something bad happens if I either climb the hill, or go through the tunnel - one or the other, dammed if I can remember which. I chose the tunnel, and was immediately attacked by a giant insect monster, one which was actually damn hard to beat for this early in the game. The book grants me twenty gold for my effort, and yet another weapon. I should say here, finding a specific weapon is very useful if you have chosen the weapon skill ability for your character, for that respective weapon. So in that respect, it's good that the book makes so many available to you. However, it does mean that I am essentially tripping over daggers and war hammers all through the forest for this part of the adventure.

We eventually leave the forest and find a massive caravan of refugees, fleeing the evil army. I join them on their travels, and protect them from an airborne attack from the dark lords flying monsters. Choosing to protect some children who are trapped under a caravan leaves me open to assault from a horde of giaks, but the book is nice enough to treat them as a single enemy, so they aren't too much of a threat. 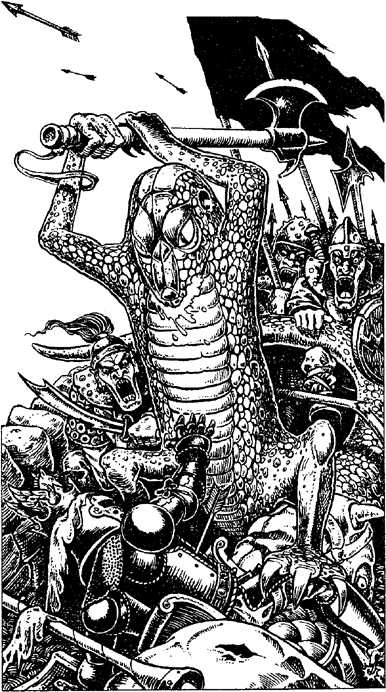 I heal up in an old farmhouse, and push onwards, where I encounter as royal regiment lead by the prince. He isn't doing too well though, as the battle quickly turns against him and he is felled by a monster called a Gourgaz. The damn thing is an utter tank and bloody near impossible to kill, in fact I'm sure that it's outright sadistic on the part of the author. Somewhere, Joe Dever is laughing at me.

With a spare four endurance points left after that utterly brutal fight, the price gives me a message to take to his father. I'd make a comment about inconsiderate quest givers, but given that he provides me with a horse, I can't really complain. I push onwards away from the battle, riding through the forest to avoid rampaging packs of doom wolves, and eventually catch sight of the capital. For a moment, I think I might make it there intact. But no, the book decides to remind me that my endurance is so low that I'm likely to die from enemy attacks if I ride right to the gate. It gives me two alternatives - jump into the river and swim, or take a short cut through the nasty, vicious, haunted graveyard of the dead, famous for the many thousands of innocent adventurers who have snuffed it from the ghosts that dwell within. Joy.

So, let's assess the choice here. The book indicates to us that running across the field is likely to attract attention of the enemy army, so it's clearly begging us to choose another option. Of the two, the river is the most innocent. Which means, I think, that it's a trap. Remember the Clash of the Princes Fighting Fantasy book, when I was eaten by invisible, carnivorous, implausible fish? Yeah, I'm not taking the river. So it's easier the graveyard of nastiness, or the field. The graveyard is the most likely option. It's set up to be so evil and dangerous, that we are bound to think that it hides a great treasure. Treasure which would attract the most desperate of adventures. But no, I'm not going to fall for that either. I make a break for the field. 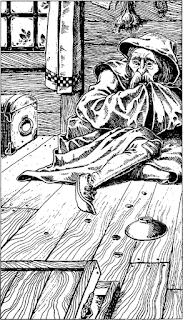 I think that I choose quite well, because the biggest threat I encounter is some easily avoided wolves. After a quick stop at an old hut in the field, I'm beset by three bandits dressed as the kings soldiers. I'd actually have almost fallen for their disguise, were it not for my sixth sense. I push onwards for another day, and arrive at the capital.

The guards recognise me as one of the Kai and offer to take me to the king. Eager to stop in at some shops and spend s some of my considerable wealth of gold, I turn down his offer and head off on my own. Almost immediately someone steals some items right out of my backpack, I injure myself in a massive crowd of people, and I'm attacked by the city's resident madman.

I'm rather thankful to get out of the city streets when I find a herbalist. Even though my senses tell me to watch out and be careful, I decided to stick around and do some shopping. Whilst looking at the various magic wands that are on special offer, the herbalist's son jumps out from behind the counter and tries to kill me. Very poor customer service, let me tell you! My best guess is that he thought that I wasn't going to spend any gold, so he decided to kill me and take it all from my body anyway. I'm doing fairly well in the fight, until he throws an explosive pellet at me, and then proceeds to cut my throat.

That herbalist is getting a very bad review on trip advisor, let me tell you!

As one of the only three Lone Wolf games I had as a kid, Flight from the Dark has held up very nicely. The atmosphere is rich, with promising world building (although they rarely try to go beyond the usual fantasy genre tropes). The sense of tension is very nice, though, leaving the reader with a real sense of desperation as you try to flee the darklord army. This is still a very good book, even when you take off the rose tinted goggles of nostalgia. But where it really shines is that it perfectly sets the tone for a franchise. If this book had been any weaker, the Lone Wolf franchise would never be the strength it is today.

Come back in two weeks time, when Lone Wolf is sent on a mission to recover the only weapon that can turn the tide of the invasion and save Sommerlund. Will he manage it? Doubt it, but it'll be a laugh finding out!


(If you've enjoyed this article, be sure to check out Justin MacCormack's two bestselling collections of dark fantasy stories - "Return to 'Return to Oz'" and "Cthulhu Doesn't Dance". His newest book, "Diary of a gay teenage zombie", is currently available now)
Posted by Zanafarr at 2:50 PM