Welcome, young adventurer! In this book YOU ARE THE HERO.

Roll one dice. Add 6 to the number rolled and enter this total in the SKILL box on the adventure sheet"...

- Later in the Gamebook -

You must jump over a chasm. To check if you succeed, roll two dice! If the number is lower or equal to your SKILL, you succeed. If you fail, you are dead and have to start over from the beginning.

How is the reader responsible for the outcome? I hope that we don't expect him to take responsibility for the dice result. Let's talk about player agency in gamebooks! 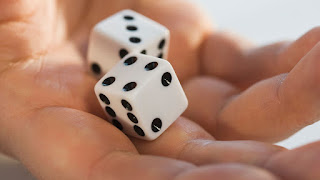 Should gamebooks be like one of my favorite board games: "Dungeon!"? Winning the session is a matter of luck, not the result of good decision making. It is still fun, but very little depends on player's decisions. My personal opinion is that gamebooks can do much better than falling into the category of player protagonism - "the sense of special investment in one token on the board over all the rest". 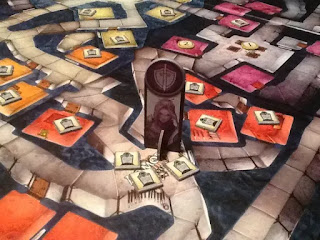 Like the lack of player involvement in the outcome of the adventure isn't enough, many gamebooks are impossible to beat without cheating. See Grave Mistake #2 (Level of Difficulty).

A few days ago, I found the following thread on reddit: How often did you cheat when playing your first gamebooks? The last comment under the post reads, "I never cheated as a teen in the 80s – either rolling initial stats or continuing on after a defeat... I always felt that I had to play gamebooks the right way, without cheating, to 'earn' any successful completion. I also found most of them too difficult to finish, and lacked the desire to keep at it after frustration had taken over."

I also think that most gamebooks aren't balanced well and reading that opinion made me feel that I am not alone.

Of course, our good old friend - cheating - is always an option. Even the Great One in the Gamebooks Realm (read Stuart Lloyd) says so in his blogpost on the subject of Cheating..?

Yes, some of us claim proudly that they read a gamebook for the story, not for the gameplay. Seriously!? Why don't you read Tolkien instead? His narrative and literature are much better than any of the gamebooks out there.

The truth is that we play games for the satisfaction of participating in the adventure and there is no participation in "Roll to determine your skill. Now roll for a skillcheck!"

Ideally, to fix the Player Agency problem from now on, gamebooks would be testing the reader's attention, memory, knowledge and logic. However, there are so many old gamebooks worth playing, but sadly, the participation in them boils down to rolling dice. Like that isn't enough of a problem, many of those adventures lack gameplay balance. And that is to the extent of the reader rolling against the odds all the time. So, how do we fix those worthy gamebooks?

See, Stuart Lloyd was kind enough to rework one of them -  Coils of Hate - for the reason of giving the player more agency. However, somehow I doubt that he would have the time to rewrite all of the gamebooks from the past.

So, I was also very amused by the solution user "liverem" found for fixing the lack of Player Agency and Level of Difficulty in the comments section under the above mentioned thread. He said, "I had some d10, but I used the table (printed at the end of the book) instead AND I got pretty good at "randomly" pointing at the correct digit (usually a 0?). I did however see that as kind of a sport, and if I accidentally did point at the wrong digit I took the consequences. Not that I think that happened very often, but I do remember dying and starting over every now and then when my random aim was not good enough."

Way to go, liverem! You found your own way to influence the outcome and that also fixed the fact, at least partially, that most of the old gamebooks were impossible to beat if the reader didn't cheat at all.

But I am extremely proud to announce that I found a much better and very universal solution. We now have a tool for adding some Player Agency and fixing the Level of Difficulty in most of the old gamebooks (and all the unbalanced ones in the future) without having to re-write all of them. I call it Dice Flick... 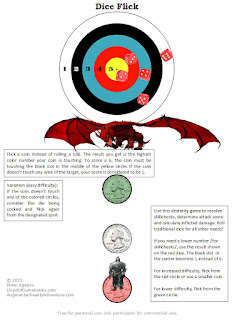 You can download the PDF version here: DiceFlick.pdf
This is a very simple dexterity game which allows you to flick a coin and get a result between 1 and 6, depending on the aim and power of your flick.
To use this gamebook supplement, download and print the one page PDF on a letter size or A4 paper. Put a quarter (or a coin of equivalent size) in the silver circle. Flick the coin, using your finger, and get a result from 1 to 6.
Use this dexterity game to resolve skillchecks, determine attack score and calculate inflicted damage during an encounter. You can, and probably should, roll old fashioned dice for all other gameplay needs.
There are some variations for increased or decreased difficulty - flick from the green or the red coin circle or re-flick the coin if it doesn't land on any of the circles (consider the die cocked and flick again just like you would re-roll the dice).
Also, if your target is a lower number, use the result on the printed dice in the colored circles instead of the numbers printed there. This is very handy for skillchecks when you need a score lower that the skill you are testing.
Using Dice Flick adds another level of player agency to any gamebook, but I would only use it for books that are impossible to beat without cheating. As a matter of fact, from now on, I would give every gamebook the benefit of the doubt and will play it the way it was meant to be played at least once. If I feel that the adventure relies mostly on chance and lucky rolls, I would use this supplement to try giving myself better chances for success.
Of course, Dice Flick doesn't fix all the instant death encounters. To influence those in the favor of the reader, I would flick a coin before I start a new adventure and I would use the result as a starting value of a Blessing stat. I would allow myself to disregard any instant death paragraphs, let's pretend that a guardian angel comes down from the skies and saves your sinful soul, at the expense of 1 Blessing Point.

See, we finally have a way to influence the outcome even in an unfairly designed gamebook. After all, there is no greater satisfaction than completely immersing in the fictional world of a book, experiencing the narrative in first person and knowing that the satisfactory happened because of your own participation and influence over the course of the adventure.
Happy Gamebooking, my friends!
P.S. Dice Flick is intellectual property of LloydOfGamebooks.com and AugmentedRealityAdventure.com
It is free for personal use, but if you are a gamebook author and would like to print it as a supplement to your future adventures, please ask Stuart Lloyd or Peter Agapov for commercial use permission! You know how to reach us.