Here's some failure paragraphs which I like for some reason.  Enjoy! 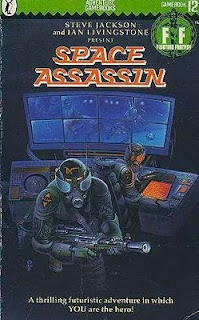 The first one is from Space Assassin by Steve Jackson and Ian Livingstone.

An orange glow pervades the room, reflecting off everything except the spheres which remain implacably black. Little doors materailize in front of each sphere and swallow them as they droft over their thesholds; within seconds the entire room is bereft of the spheres. The doors evaporate, leaving you easy eaccess to the other side of the room. Before you can stroll across, however, the room vanishes and you find yourself floating in a starry void, light years from anywhere. A stone tablet drifts slowly into view. It is engraved: "We eliminated seventy-seven spheres of annihilation on your account. As you do not have the means of paying your bill for this service we have taken the liberty of foreclosing and transporting you to this place. Sorry."

The tablet drifts away, leaving you to spin in the void. You have failed.

It's all about the 'sorry' at the end.  It adds a touch of humour to floating in eternal blackness.

This ending is from Moonrunner by Stephen Hand. You have leaned the hard way that there is no escape from Karam Gruul's infamous wire tunic.  Your hunt for the fiend ends in a most grisly fashion.

This ending highlights what an evil genius Karam Gruul is. Anyone who has invented their own grisly infamous trap deserves respect.

The next ending is from the Citidel of Chaos (no, not that one) by Jamie Thompson.

You ave no way of entering e Overlord's World and none of the thinkers among the Champions can come up with a solution either...and time is running out.  After ten minutes or so, the double doors crash open and a veritable army of Enforcers and Cybermarines come boiling in.  The battle is epic in scale and you will go down i the annals of the Resistance forever.  But the outcome is never in doubt.  Eventually, you are all overwhelmed.  It is all over.

It is a great example of a blaze of glory ending.

This ending is from Deathtrap Dungeon by Ian Livingstone. You step up to the mirror and are amused by your distorted reflection. Your head looks as large as a pumpkin and your face is exceedingly strange. Suddenly, without warning, a terrible pain pounds through your head and you try to look away from the mirror but are unable to. Some evil force is keeping your eyes glued to your own reflection. You grip your head with your hands and realize with horror that it is expanding. You can withstand it no longer and, blacking out with the pain, you fall unconscious to the floor, never to wake.

It has an element of horror to it.  It starts off with you looking at a funny image of yourself in a mirror and ends up with you dying horribly.

The last one is from Necklace of Skulls by Dave Morris.

No expression shows on the hard ma-like face as you make your genuflection.  There is no roar of rage to show he is affronted nor flash of sullen anger in his eye.  He only raises his sceptre slowly as though to emphasize the point he is about to make.  Then, before you have a chance to move, he brings the sceptre swishing down to split your skull open like a melon.  Your adventure ends suddenly and horribly.

This paragraph really drives home how stuffed you are and hopeless your situation is against your foe.  First of all, it contains the word genuflection.  I have no idea what it means and so my situation also becomes hopeless in a literary way.

Then he does nothing to show off his power which is a clear indication that he has so much power that he does not need to show it off.  Oh dear.  All he does is slowly raise his sceptre.  However, even that is too quick for me and he then splits my skull open like a melon.  Which means he didn't find that too difficult.

A summary of what I have learnt from all these death paragraphs.

I will also post about my own writing.  Something I have done very little of during the winter, but I think I need to do it more regularly.
Posted by Stuart Lloyd at 10:47 PM