The birth of a gamebook or: The NOW is coming. 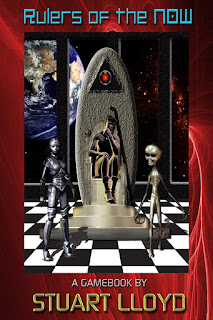 Rulers of the NOW has been a long time coming.  It grew from what could have been one of the tiniest ideas - what would a gamebook with 666 paragraphs be like?

I have not read a gamebook where the writing in the paragraph reflected some significance of the number and this is something that I wanted to do.

So I started with 666.  It seemed like a good number of paragraphs for a gamebook and had obvious connotations.  Then I thought to myself - what other numbers could I use and how could I get them into a theme.

This is where my obsessive podcast listening comes in.  I listen to loads of podcasts and audiobooks.  I can't get enough of them.  In fact, I speed up all my mp3s so that I can listen to more, more, MORE!

A lot of the podcasts I listen to have a lot to do with conspiracy theories - they run the gamut from reporting the unknown to coming up with alternative theories for UFO sightings to describing every level of the Illuminati and its modus operandi.

There are many sources that state that the Illuminati is satanic and that its influence pervades our lives through symbols in the media. According to some people out there, we already live in a dystopia simultaneously under constant surveillance as in 1984 and bombarded by short term pleasurable distractions as in Brave New World.  My idea was growing.

So I have the idea - dystopia.  I wanted to start the story with you as an ordinary citizen who knows little about the world outside the dystopia who is suddenly thrust into its crazy world, so I had you accused of a terrorist.  Why?  That will be explained in the full book.  The idea was that you would go from fleeing from the law to fighting back and you would take the fight all the way to the top - you just had to find out who was at the top.

This is where the title came in.  I'm usually terrible at titles and it wasn't until six months after my original idea that the title came to me in a flash while I was walking to work.  The book is about taking down the leadership of this dystopia, but that is a big mystery.  Conspiracy theorists talk of the New World Order.  How about if the dystopia was on several planets - the New Order of Worlds (NOW) and since one of the big questions is 'Who rules the NOW?', why don't we have that as a title?  So that is how the title 'Rulers of the NOW' was born.  There's also another reason why, which you'll have to find out when you read the full book.

At the time of writing this post (mid November), I've written a third of the paragraphs and I plan to release the full book by April 2012.  I've even had a cover made - I will talk more about that next week.

As for NOW, I hope you have a good week and I hope you nurture your tiny seeds of ideas as, like mine, they might grow into great books.