Evolution of an Ebook cover - Rulers of the NOW

Rulers of the NOW was the idea that just wouldn't leave me alone, so I decided that I would do this idea properly.  I would make it into a real book and everything.  That everything included a book cover.

Twitter is a great place to meet literally everybody.  At the time of writing this post (mid November), I have 505 followers on Twitter and I follow 1243 accounts (I don't say people because I know that some of them are groups and some of them are cats who have more followers than me).

I can't remember if Graphicz x Designs started following me or I started following them but I went to them for a quote.  I wanted a custom made cover as I wanted my image to include characters from the book and occult symbols that I had heard or read about so I sent Graphicz x an art description.

I had never written an art description before, but I had seen plenty of them on the Magic the Gathering website when I read articles about the making of cards.  It was informative to read them as you could see the finished product and sometimes some of the intermediate sketches that had come as a result of the description.  For a good example of the evolution of a Magic the Gathering card's art, click here.

I tried to emulate such a description, so I sent this:


There are three figures in the same arrangement and postures to the devil tarot card.


The central figure is sitting on a shiny steel futuristic throne on a raised steel dais (the throne and dais is about the only thing in the room that should be shiny) which is plain. has his right hand raised
like the devil. His left hand is holding a shiny steel rod with a red glow at the end. He is pointing this rod to the ground, like the devil is pointing the torch to the ground (the red glow is on the
bottom end). The central figure is extremely handsome and has a perfect physique and is wearing extremely smart clothes that show it off (they may be futuristic or contemporary depending on what
is best to show of the central fiigure's physique). His right eye has been replaced by an eye patch with circuitry on it. There is a red glow in the centre of the eyepatch. His facial expression is what TVTropes describes as a Kubrick stare.


Above the central figure on the wall is a black triangle pointing upwards. In the centre of the triangle, there is a glowing red eye, similar to the HAL 9000 eye from 2001: A Space Odyssey. It is basically a black eye of providence with a red HAL 9000 eye.


The figures either side of the figure are not chained up (unlike in the tarot card) and they are
androids rather than real people. They have the same position as the figures in the Devil card. Their
suits should be futuristic and identical in style except that one should be predominantly white and
the other predominantly black.


The female figure, one the central man's right (the left of the page), should be an android that bares some resemblance to the robot from the film Metropolis (without causing any infringements to intellectual property.)


The male android on the central man's left (the right of the page) should resemble a grey alien...(Spoiler). As far as I know, I do not think that the grey alien image is  copyrighted by anyone.


The floor is a black and white chequerboard and the android should be standing on it while the central figure should not be touching it. His dais raises his throne above the black and white floor.


From there, GX was very attentive to my needs.  He gave me a questionnaire to fill in to get a better idea of the feel of my book.  He also asked for a synopsis.  I gave him the one below:


Your house has burnt down, your identity has been destroyed and the enforcers of Callisto are
hunting you down to the ends of the Jovian Moon.
This is only the beginning of your discovery that the rulers of the New Order of Worlds (NOW)
is not the benevolent and democratic government it claims to be. Is there something more sinister
happening in the shadows? Is there a greedy and malicious power behind the throne?


As a fugitive in your own land, you need to escape your draconian rulers bent on sending you to
the hellish sulphur mines of Io. You must call upon all of your reserves of strength and willpower to
save yourself and maybe discover who the rulers of the NOW really are.


GX really went with my ideas, accommodated me very well and gave me some good advice.  The level of detail was too high to show on a thumbnail of an ebook cover, so the central character does not have small details such as the glowing red eye.  He paid a lot of attention to detail and provided me with several proofs for me to select from.  One of the first sketches to come back had Jupiter in the background because I had mentioned Callisto in the synopsis.  I emailed back to apologise and say that I wanted Earth in the background.  It was my fault as I did not state that although you start on Callisto, you don't stay there.  There were some other details but GX was very good and accommodated all of my wishes.

The final product is here: 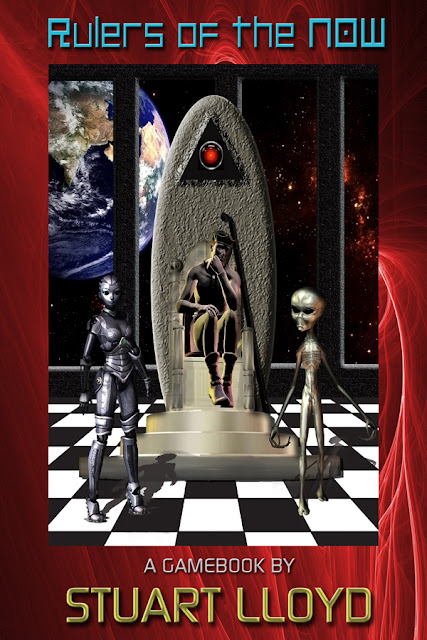 Many thanks for such a brilliant ebook cover, graphiz x!

I wish you the best with all of your covers.

Happy gamebooking!
Posted by Stuart Lloyd at 8:00 AM