Okay, so this punk-ass tries to cave in your skull - crack - but you're, like, too badass to die, so you break out a shotgun and point it right between the poor mofo's eyes, and you're like, "Yeah, bitch, you think it's that easy to - "

Whoa. Sorry. I've just been in a really gung-ho mood ever since I read Heavy Metal Thunder. Let me take a minute to calm down... 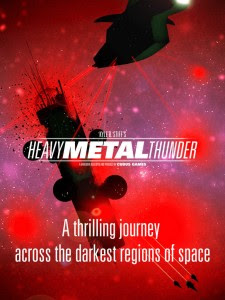 Okay, so this time around I'm talking about Kyle B. Stiff's Heavy Metal Thunder. It's the second app from Barcelona-based Cubus Games. Their first release, The Sinister Fairground, was in a comedy-horror vein. And it was excellent (read my review of it here). This time around, they've gone sci-fi.

And what great sci-fi it is. You take the role of a member of the Black Lance Legion of elite jetpack soldiers, humanity's first and only line of defence against the nebulous extraterrestrial Invaders. You play Mr Wiggles (the name isn't permanent), a wounded amnesiac who struggles to recover his memory, and to return to his home before the Invaders can destroy it. It's grim stuff - what small pockets of humanity remain are on the run; you aren't fighting for victory, but for revenge.

Throughout, there's very much a theme that only the strongest can survive - and as Mr Wiggles strives to do just that, the story presents some probing choices weighing mercy against practicality. Will you kick a man off your spaceship so that you have more food for yourself? Or will you welcome him on board, even though he doesn't seem to have any useful skills? And there's a dark undercurrent that hints that you've been somehow 'programmed' to feel a certain aggressivity in specific situations. That's just begging for more development in sequels to come.

There are some lovely, original touches throughout the story - without being too spoilery, my own favourite would be the long-haul flight through space wearing only a little short-range jetpack, and towing a huge net of food and supplies behind you. Excellent stuff. Or, for instance, a section in which another jetpack soldier's radio is broken out in the vacuum of space, so you have to touch your helmet against his in order for them to convey sound. There are a bunch of fantastic little details like that. Of course, you should expect some pseudoscience with your sci-fi, and the pseudoscience here is well thought out, and credible - the 'fat mass' generators that create gravity aboard spaceships, for example. Kudos to Mr Stiff for that (that must be a fake name...).

Okay, a few technical points. Game mechanics: stats are a bit D&D-esque (Strength, Dexterity, Intelligence, Will, Charisma, as well as Zero-G Combat and 1-G Combat), but alongside that you can also learn a bunch of skills (Jetpack, Computers, Xenobiology, Piloting etc.). You gain experience as you go along, and level up, allowing you to increase stats and pick new skills. And it's all pretty well balanced; as with a lot of good RPG systems, you often find yourself just a little short of the next level up, and craving more Exp, more Exp, more Exp... Combat and skill/stat tests require you to roll virtual dice - and, while I'm not a big fan of dice-rolling in apps, these are some pretty funky digital dice. Also, just like in The Sinister Fairground, you gain Hero points as you go along, which allow you to retry, or automatically succeed in, failed tests. Unusually for a gamebook (and this is adapted from the Heavy Metal Thunder gamebook), the story is dialogue-heavy, and each 'page' is usually quite long. Me, I quite like that, and I suspect that Cubus have intentionally tried to do away with a lot of redundant screen-tapping. The artwork is good, overall - the pictures of spaceships, or planets, or machinery, are beautiful; the pictures of people are a mixed bag. And the game motor looks great, and is simple to use - it's another step up from The Sinister Fairground, in fact.

Does the game have any bad points? Not so many. As I hinted at above, sometimes the tone of the narrative and dialogue is just suuuuuper-macho, and it gets a bit tiring. And there are a few too many T-junction choices for my taste. Also, I felt a bit frustrated that a certain key plot thread regarding Wiggles' amnesia seemed to go unresolved. Maybe that's just the way I played the game, though. Maybe I did something wrong; only future playthroughs will tell.

So, overall verdict: great, great, great. Even better than The Sinister Fairground, which was brilliant. Cubus are really starting to establish themselves as makers of awesome interactive fiction apps. Congrats to them, and to the spuriously-named Kyle B. Stiff for writing such a great story.

Trivia of the day: 'Heavy Metal Thunder'? Also an album by Saxon.