I start this series with talking about difficult books or stiuations in books that I still loved because I enjoyed their challenge.  And without further ado, here they are.

Siege of Sardath is a very difficult book but once you've been through it a few times, you start to realise that all of the situations actually make sense in the context of the story and it all actually makes sense.  It is like the Fight Club of gamebooks.  Here are two situations in the book that appear to be difficult but you can actually work them out with a little thought.

If you find a tomb in the woods and kill a couple of winged dark elves trying to get inside it, you are presented with a stone door and several options to getting in.  One of them may give, as the book describes, a clue to a clue.  you hear a ghost telling his beloved to 'Perform the sing of summoning' to enter.  This is a clue to a clue as a character you may come across before hand may do such a thing - he taps on a magical mirror three times to summon a suma.  However, you then need to work out which action will work.  You are given the option of hitting the door which most players might discount as it is big and stone.  Sure enough, if you do hit the door, it does not make a mark.  You are given the option of hitting it again and if you do, you do not make a mark.  If you hit it a third time, you have performed the sign of summoning and the door opens.  I think that this is challenging as it rewards players for reading carefully or being persistent and being willing to try things. 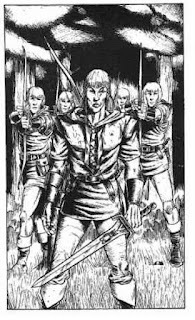 You may also come across Sorrel, an elf friend of yours, in Siege of Sardath.  However, he does not recognise you and orders his elvish friends to attack you.  Once again, you have several options of approaching this, including shooting him with your bow and arrow.  Normally, you wouldn't do this but once again, the book rewards observant players.  You are told that Sorrel has a scar over one eye and the illustration shows him with a scar on the other eye.  If you hit him with the arrow, the illusionary disguise is destroyed to reveal that Sorrel is an imposter.  There are other clues that you can pick up.  For example, you could tell him something that only the two of you know.  He doesn't acknowledge this tacit information and instead orders the elves to attack you.  You risk your stamina, but you get another clue.  You may also come across a sword that looks very much like Sorrel's (it is illustrated) which is also a clue that the real Sorrel is dead.

Giving Lord Leiutenant Rhyger the magic spear is a selfless act which gives him a chance against Helghast, powerful undead that can only be harmed by magic weapons.  Giving him your only magic weapon and risking your own life in the process is a wonderfully selfless act that deserves a reward.

Well tough.  If you do give him the magic spear, the only way to avoid a horrible death is to have a substandard skill and have all of your money stolen.

This is a challenge because it goes against any ingrained habits we may have picked up and shows us a bit of the internal logic of the book.  Also, death is not certain if you do give him the spear as you are given an out.

It is also a good roleplaying opportunity which can be its own reward.  as Dave Morris once said, rewarding certain actions in the game is not moraility - it is economics.

Daggers of Darkness and Fangs of Fury by Luke Sharpe

Many of the decisions that you make have completely unpredictable consequences that lead to you being take on a completely random path but eventually you reach the end and your ultimate victory.

The reason why unpredictable consequences do not bother me in these books is because the consequences are rarely fatal and sometimes entertaining.  They also do not stop you from winning.  In these books, I quite enjoy being taken on these random rides through  enemy infested territory, escaping each dangerous situation by the skin of my teeth, only being dropped into a more perilous one as I knew that I still had a fair chance at victory.

Even with minimum stats, you still have a 1 in 6 chance per round of killing an opponent in combat, so there are no unfair combats, you have to be very observant to get and use the clues you get, you learn that you shouldn't squander your valuables (such as the crystal club - you don't need to use it when combat is so easy), you have interesting intellectual puzzles like figuring out language and working out exactly where you fit into a rich and detailed backstory.  Your enemies are intelligent and ruthless and don't suffer from Bond villain stupidity meaing that if you do beat them, then you know that you've achieved and that error about the pendant is actually an initiative test.  Apart from the first bit, none of the deaths are determined randomly (and if you do die due to a die roll at the beginning, you've only wasted 5 minutes rather than a couple of hours playing the whole gamebook only to realise that you missed the item you should have got on your first decision).  The book is a challenge of your wits and persistance and after the die rolling is over, your success or failure depends on your choices rather than die rolls.  Even the paths that lead to failure are interesting and fit in with the storyline so you have a detailed world to explore.

Look at the name.  If it was easy, it would be called Pushover Dungeon. Sure, it's hard but that makes it all the more satisfying to win.  And sure, you have to choose left or right a lot of the time, but maybe it's not about the decision, it's about the feeling of suspense you get every time you open a door, not knowing if it will be the last thing you do.  All the situations are memorable (how do you get the gems from the giant statue?  how do you deal with the bloodbeast?  how gutted were you when you had to kill Throm?).  You will probably die in the dungeon, but it will be a thrilling and emotional time and if you do win, you will be over the moon.

Killing Honoric, Manse and Yaemon in Avenger! (Way of the Tiger book 1)

These are three of the biggest villains on Orb and you have to kill them in a single night.  Each one of them can easily kill you - you have no chance against Honoric and his anti magic, fear inducing sword in a fight, Manse has several spells that can kill you and yaemon is an unparralled martial artist.  Trying to attack any of them offers up interesting choices and almost certain death.  first, you ahve to kill them in a particular order.  Going for Yaemon any time other than after you have killed the other two will get you killed.  This is kind of a metagame decision as Yaemon is set up as th ebig bad of the book and so you need to kill the lesser villains first.  But which one first?

The correct order can be worked out by an observant reader who notices that Manse's magic does not work when Honoric's sword is around.  So wouldn't it be good to kill Honoric then use his sword against Manse?  Exactly.  You can kill Manse without the sword but it is a lot harder to do.

So how do you kill Honoric?  he is asleep and he is easy to wake, but there is another option.  You havea vial of the blood of Nil, an extremely rare yet extremely deadly poison.  The question is:  do you use it now and probably never have it again or save it for a more powerful foe?  This choice is far more interesting than any old 'Do you wish to use item X?' choice as it is played up just how rare and valuable the blood of Nil is and it leaves a question in my mind - is this the right time to use it?  Decisions like these are good in gamebooks as they made me think about whether I should use the poison or save it for later (or, in metagame terms - is this the correct time to use the poison or is the book just trying to get me to waste it and potentially make me lose the game - decisions like this are harder when the stakes are higher).