Happy new year, everyone! I am looking forward to a wonderful 2017 with lots of changes and lots 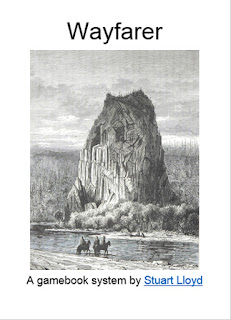 I have actually been quite busy over the last few days. After working on it for ages, I have finally finalised my system that started off as Legend of the Wayfarer. If have called this new version Wayfarer and it is probably the piece of work that has the highest effort to word ratio of anything I have written. Every section of the system and world building has been written, rewritten and tinkered with until I've come up with a system that I'm happy with. It is simply called Wayfarer and I will make it public at some point in 2017 when I've also written an adventure for it. It is available for my Patrons to see. I will also be writing articles about the develpment of Wayfarer (because I've done a lot of it!) for my patrons. I'm only asking for $1 per product on my Patreon feed.


You can get the original Legend of the Wayfarer rulebook and the eight books I wrote on RPG Now for Pay What You Want. 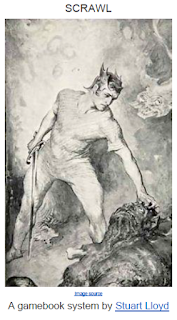 Wayfarer is a system for a very low magic world that is heavily based on medieval Europe. The adventures will be mainly based around exploration and NPC interaction. There will not be much combat. As a response to this, I took the principles of the Wayfarer system and combined them with old school dungeon crawling. This lead to a system called SCRAWL (short for Solo CRAWL). This will involve the opposite mentality to Wayfarer - there will be no attempt to build a believable society with a rich history and ancient mysteries. The land of SCRAWL is full of villages with all the weapons and potions you need and they're all a day's walk from a dungeon full of monsters and treasure, wilderness where monsters roam with treasure and
cities where monsters live with their treasure. SCRAWL will hark back to the days of old school gamebooks such as Warlock of Firetop Mountain, Forest of Doom and City of Thieves.


I have also released a short adventure for SCRAWL - Dungeon of the Orc Boss. It is not a gamebook, but a dungeon with a random generator, which I made to see how the system would work. 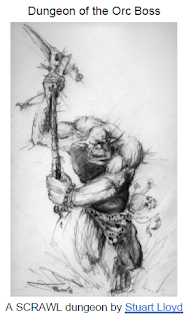 Once again, you can see SCRAWL and Dungeon of the Orc Boss if you back me on Patreon.

Or you can wait for a few weeks before I release them on RPG Now.


The Gamebook Feed is getting more views than this blog on most days. I've removed the content from the posts to make sure that people click on the links and so the people who wrote the posts get the traffic.

So that's what I've been up to over the last few days. Enjoy!

If you would like to show your appreciation and/or get a sneak preview of Wayfarer and SCRAWL products, you just need to back me on Patreon for a mere $1 per product.
Posted by Stuart Lloyd at 8:16 PM