So today, I wanted to write about how some people who create things and how a lot of themes seem to come through in a lot of their work. 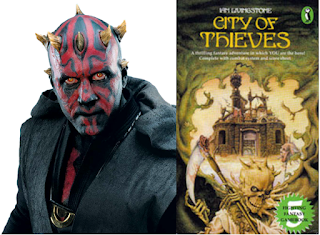 A you can see, there are some resemblances. 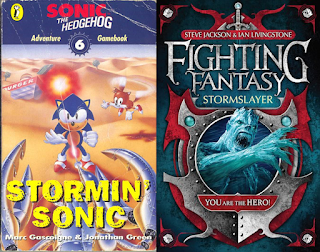 Here's the synopsis of Stormin' Sonic:

Sonic and his pals have never seen anything like it. All the Zones are being affected by a mysterious Weather Egg creating climate chaos wherever it goes. Only you and Sonic can save Mobius from a weather wipeout.

Use your skill, luck and stamina to help Sonic in this amazing gamebook adventure.

And here's the synopsis of Stormslayer:

After years of peace, the kingdom of Femphrey is at war again - only this time it is with the elements! Devastating storms sweep across the country, destroying all in their path. Blizzards and floods threaten some areas while others suffer the worst droughts seen in centuries. But is this climate chaos all it appears to be? Or is there some dark design to this meteorological meltdown? You are a seasoned adventurer, known throughout the land. You have battled giants and slain dragons, but how can even a veteran warrior like yourself fight the weather? Are you ready to take up the challenge and face the perils that await you within the eye of the storm?

Both books involve having to go to different areas that represent the four classical elements in order to collect items to defeat the villain who has a weather controlling flying vehicle.

It seems that ideas and themes start to recur with a lot of people. I've found this myself.

It took a while for me to "find my voice". My first gamebooks used the Fighting Fantasy system and were mainly dungeon crawls. I experimented a bit with Lovecraftian horror, but I also found that my twisted sense of humour sometimes shone through.

After 13 years(?!!!) since my first gamebook, I think these are my themes:

Smaller, personal stakes rather than huge world ending ones

Some of these are pretty easy to explain if you know my background. I have a science degree (numbers) and I was into conspiracy theories a lot. I did have a sense of black humour. The noncombat solutions and the personal stakes are my own push back against combat being too good solution in a lot of gamebooks and my belief that people are more invested in stories where they know and can relate to the characters and that increasing the number of nameless fictional people who might die if the villains win, does not necessarily do that. The final straw came in the Dr Who episode where the Tardis explodes and starts to cause the entire Universe to have never existed.

Having themes is not necessarily a bad thing. These theme could show an evolution of an idea (such as the Knightmare gamebook The Forbidden Gate containing a precursor to the Virtual Reality skill system) or people who like the theme will come back for more (such as Jon Green's gamebooks based on public domain fiction). Also, your own themes are just easier to do. They require a lot less effort and they will look better on paper because they are about things you really know to your bones and feel rather than something that you know intellectually.

I've realised that it might take some time to find your own themes, but it is good to do so.

Do you know your themes?