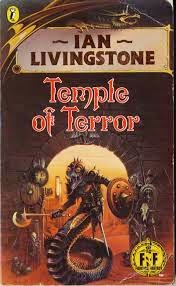 Fighting Dantasy has released a couple of posts recently and I rejoiced!  This is the blog that I read
back in 2008, when it was probably the only gamebook blog, and wished that I could make a blog like that.  And then, two years later, I did.  So I have a lot to thank Fighting Dantasy for.  The last playthrough, Temple of Terror, is quite short, but if you haven't seen this blog before, have a look at the archives, where Dan has gone through (almost) every Fighting Fantasy book (just Howl of the Werewolf to go).  Here is his latest post:

It's been six years since I read Temple of Terror, and in that time I've obviously gotten worse at gamebooking, as you'll soon find out.

Also since then there's been a little TV show come out called Game of Thrones, which I doubt a single person reading this blog hasn't watched - or read.

I bring it up 'cause the intro blurb to Temple of Terror is frighteningly familiar to anyone whose imagination has visited Westeros; an evil man who wants to rule the land, vast deserts, controlling wolves and dragons, large armies... okay, so typical fantasy tropes. But hey, it's good SEO for me to mention Game of Thrones, right? Game of Thrones.

Anyway, so this Joffrey-Mother of Dragons-Bran Stark mashup guy called Malbordus is planning to get his dragon army together by collecting some artefacts, 'cause he went to the Ian Livingstone school of badassery. You - I - have to stop him by getting the artefacts first, and save the world - to get you started, ol' stingy Yaztromo gives you a measly four spells and 25 gold pieces.

He knows Malbordus' evil plot 'cause his crow overheard it (if only it was a raven...).

Now there are two ways you can go - through Blacksand, or across the desert. Last time I went via Blacksand, and this time did neither - I jumped on board a giant eagle, was attacked by a pterodactyl and sent plummeting to the ground, and my incredibly early doom. Sorry about that, world.

I actually spent more time getting my USB keyboard to work with this ancient and busted laptop than I did reading Temple of Terror.
Posted by Stuart Lloyd at 12:00 PM