Well, it's been a long journey to get here.

The Crown of Kings is the last in Steve Jackson's "Sorcery!" series, and definitely the most difficult. That isn't really saying much, though, as my poor adventurer has been through a lot on his travels to get here, at the foothills of the High Xaman mountains, ready to find his way into the Fortress of Mampang and recover the legendary Crown of Kings from the evil Archmage. Specifically, I have been lured into a field of death blossoms, drowned in poo, and set on fire by a cunning snake. My odds of surviving this step of the adventure is extremely slim.

Also, while reading through the rules for this book again as a quick refresher, I recall that I could very easily have called on Libra, my patron Goddess, for assistance during the last adventure in order to avoid being burned by the Fire Serpent. And while technically that is the case, because the book doesn't stipulate if I can or cannot do so in combat, I'm going to assume that it is not meant to be used during the heat of battle. Using it like that just seems a bit cheap.

I'm forced to remember the first NPC character I met, way back in The Shamutanti Hills, the guard who told me that he wasn't going to bother wishing me luck because my quest was basically doomed. I suspect he knew just the kind of things that were waiting for me. But here we are, starting out again. Just as in the last two books, I'm using the same stats I rolled at the start of The Shamutanti Hills, with no backpack items except for my 20 gold pieces and two meals.

We start out on the trail drawing close to the Mampang Fortress. It is visible in the distance, over the mountains, and I am determined to get there. The trail is dusty and marked with hoofprints... Y'know the sensible thing for the people of Analand to do would be to give me a horse for this journey. And an army. But at very least, a horse. Either way, there are three caves which I can shelter in, and I choose the one that the hoofprints are leading into.

I turn to the next section, which is way up in the '500' numbers... Yeah, I should mention, this book has 800 sections. It's twice the size of a normal FF book, which just shows how ambitious this series really is. Anyway, the hoof prints belonged to a family of Satyrs who seem to have died of the cold in the cave, so I decide to light a fire and keep warm instead, ignoring the decaying bodies. I'm sure that's hygienic. If I was a bit more heroic, I may have been willing to perform some kind of funeral ritual, but nuts to that.

The next day, I note that there doesn't seem to be any animal or plant life in these rocky climates, which tells me that I've probably wandered into Mordor somewhere along the way. I stumble across a flimsy rope bridge, and before too long I am attacked by killer bird-men. I'm not given the chance to use my lightning spell, but I'm not too fussed because that one spell failed me repeatedly on my last leg of this adventure. Instead, I chuck a fireball at the bird-man, which has far better results. Nothing beats a fireball to the face, it seems.

I clamber my way further across the mountains, and soon come to a large chasm that separates me from the fortress. The book offers me a rope to try to swing across the chasm, but I don't much want to risk falling horribly to my death this early in the adventure. Instead I press on until the book gives me the option of taking a wooden bridge, but on closer inspection the bridge makes some very dubious "Oww!" noises when I try to walk on it. I opt for finding a third option, which involves climbing over a rock-fall and spraining my ankle. But at very least I'm still alive.

The next thing to get in my way is a rock-slide, which threatens to block off my path to the fortress. But with a quick wall spell, I'm able to push my way through the tumbling rocks without any problem and then bang, before you know it, I'm at the fortress. Yes folks, I have made it to my destination. Mampang Fortress.

The route to the fortress's entrance is guarded, but in typical Fighting Fantasy style, the guards are asleep. Being the guard for an evil warlock's fortress must be the easiest job in the world, knowing that all you need to do is sleep and get killed by adventurers. I find a cave just opposite the fortress, and head to sleep. That night, I am confronted by a vision of the goddess Libra.

Because I'm such a loyal and awesome devotee who has certainly never cursed Libra's name while I was being sprayed with human fecal matter in the depths of the sewers of Khare, Libra tells me a few useful things. Firstly, she cannot help me once I'm inside the fortress, because the entire building is the nexus of all evil in the multiverse or something, and if she helps me then she will possibly be eaten by Darkseid or something, I dunno. Either way, no help. Second, there's a secret entrance. And third, those Satyrs from earlier? Well, it wasn't the cold that killed them, it was the most horrible plague imaginable, and now I've caught it.

With that lovely bit of info, Libra promptly buggers off. Hey, not so fast, my dear. I still have one chip to cash in before I head into the fortress, and I'm using it right now. I demand that Libra cures me of this horrible disease that would make it impossible for me to regain stamina, and then tell her to toddle off back to Valhalla while I do the important work.

The following day does not start off well. Oh boy...

I head up to the entrance of the fortress, and cast a spell on the guard in order to confuse him and allow me to pass. It does not work. I then decide to knock on the door, hide, and dart inside when he's not looking. I do this, only to find that there is a second (even larger) guard waiting inside the gate, with two of his biggest mates.

I immediately cast a spell to create a blinding fog, but this spell also does not work. Now convinced that I am just some random madman who thinks he can do magic but is in fact only waving his arms around crazily, the guards proceed to pummel me until I have only four stamina points remaining. But, and this is the important part to remember, I am not yet dead.

The guard's toilet is quite possibly the second most hideous thing I have ever experienced. I am violently sick from the sheer smell of it, and I after I fail my test of luck, I am reduced to vomiting loudly in the hallway. I am now down to only two stamina points. Let me just restate this for you here - the smell of the toilet is so bad, that it has injured me as much as being hit with a sword.

Clutching my bleeding nose (which I assume has ruptured open from the awful smell of the guard's toilet), I hear a group of men in one of the nearby rooms laughing. They are, no doubt, quite aware of this reaction to the guard's toilet. I expect that it is a common reaction. Hell, the Archmage's minions probably use it as a means of torture. Or take bets on how long a new recruit can last. I decide that enough is enough. I head off to give the laughing men in the room a piece of my mind.

The moment I enter the room, I realise that the inhabitants are black elves. Oh dear. Throughout this adventure, black elves and the subject of race has been rather problematic. It turns out that this time, the boot is on the other foot, as the laughing elf immediately points at me and says "Hey, check out the colour of this guy's skin!" and proceed to hurl racial epitaphs at me.

The book then offers me the chance to try to make friends with them, which is best assumed to mean attept some self-deprecating humour. Instead, my character in the book promptly launches into the kind of racist rant that would make Kramer from 'Seinfeld' feel bad. I promptly scream every kind of race-related insult at the elves that I can possibly think of, and for some strange reason, they get a bit upset at this. Honestly, here's a clue for any budding comedian - if the punchline of your joke is "the black people kept bumping into each other in the dark because they couldn't see each other", find another line of employment, unless your name is Bernard Manning.

Given that I have only two stamina points left, I take a gamble on a spell in order to repel them. I'm given the chance to use the 'niff' spell, and my mind drifts back to the guard's toilet. Determined that this spell could cause them to flee, I use it. Sadly, the toxic emissions that I have created affect myself even worse than I could have expected, dealing a full three additional points of damage to myself. Silent, but very deadly. 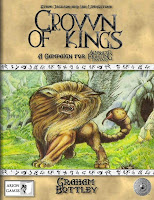 I am sure that the elves then gather around and kick my body for good measure.

So there we are. Having crossed the Shamutanti Hills, braved the cityport of Khare, went up against the Seven Serpents, and in the end I choke to death on my own magic fart.

This book is without a doubt one of the best FF books. It is so indepth and intricately written, with so many challenges delivered with such variety, and marked with a uniquely twisted sense of humour, and Blanche's artwork is just so amazingly evocative and captures all of that. Playing through the "Sorcery!" series is a real thrill, its epic scope and ambition is a real hit. It's been great to return to these books after so many years. These really are some of the high points of the gamebook genre.