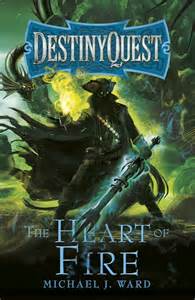 Hello all! Today, I have some very exciting news from Michael J. Ward, creator of the Destiny Quest series. So far, there are 3 wonderful books full of exploration and awesome combat, but now there's more...

Who are you and what have you written?
I’m Michael J. Ward and I’m the author of the DestinyQuest series of gamebooks that launched back in  2011 with The Legion of Shadow (gosh, was it really that long ago?!). There are currently three books in the series, with a fourth soon to be in the works.

So book four is going ahead?
Short of any major disasters, then yes I am due to start the writing in July with the aim of completing the book by Christmas (that is my optimistic timeline, anyway). As it has been a while since I penned any fiction then it may well take me some time to get back into the swing of things!

And the new book is going to be published by Megara Entertainment?
Yes, while I was attending Manticon in Germany last year, I was lucky enough to meet Dave Poppel who was there representing Megara Entertainment. He asked me what my plans were for Book Four and explained that they were very keen to publish the series.
Obviously, I was over the moon with the news. Megara produce some beautiful gamebooks; real collectors’ items, with hardback covers and colour maps etc., so I am extremely excited by the possibilities.

You mention maps. In Book One and Two there were three maps/acts, but in Book Three there were only two. Will Book Four continue the trend of only having the two maps?
I found the two act structure very difficult from a story-telling perspective. The only reason I dropped to two maps in Book Three was because my publisher wanted to print the maps on the inside covers. I have been assured by Megara that I am allowed to have three maps and return to the normal three act structure.

Each book introduces something new and different. In Book Two it was team battles and in Book Three we had the special death moves and the sled races. Can we expect new mechanics in Book Four?
Oh yes, there are going to be a lot of exciting new things. Obviously, it is early days and I can’t go into too much detail, but pets and summoning will be making its debut, giving you further tactical choices in combat. There will also be a ‘vault’ where you can store weapons and equipment, so you no longer have to suffer the soul-crushing loss of destroying that favourite item when you swap it out. There is lots of other new stuff too!

With each book it feels as though you have been refining the combat and the character classes. What can we expect from Book Four?
My goal with DestinyQuest was to always have the three paths (rogue, mage, warrior) play very differently. It was a difficult aim to achieve and I wasn’t satisfied with the results in the first three books. This time around, I went back to the drawing board and planned the three paths from the ground up, so to speak, especially how their abilities interact. I am pleased to say that I think I have cracked it – and all three paths should genuinely ‘feel’ very different to play now. Each path now has a couple of dedicated builds (i.e. playstyles) that have abilities that play into that. So you could focus your character into one playstyle or take a mix of the two. I think this approach offers much more synergy with abilities and I hope will be much more satisfying to play.

Will team battles make a come-back?
I’m not sure yet, as there is so much going on with Book Four that adding in the team battles might just be overload for newer players. But don’t rule it out. One thing I can promise though – the legendary monsters are getting a buff for Book Four. Trust me, they are gonna be big, bad and ugly, and present a real hardcore challenge for the dedicated.

Book Three had the death penalty system to add consequences to losing a combat. Will this see a comeback in Book Four?
The death moves and the death penalty system suited the character and the themes of Book Three, but they don’t really have a place in Book Four.  Instead, your character will have a new special ability (that will link to a new chain of abilities) , which they can use. Again, this will add to the tactical options you have in combat.

With each book, the choices you make and the paths you can choose have become more complex. What can we expect from the storytelling and options in Book Four?
I hope to push this as much as I can. I’ve learnt from games such as Telltale’s The Walking Dead, just how powerful character interaction can be – and how that can weigh heavy on your choices. I really want to offer readers a cast of characters that they care about, and choices that will have real and meaningful consequences. While I am still in the very early planning stages, I sense that Book Four will have more in common with The Heart of Fire, in terms of its structure and storytelling.
There was mention on your site of a kickstarter for Book Four. Can you tell us more about this?
Nothing is set in stone as yet, but I know Megara are very keen to run a kickstarter towards the end of the book’s completion. That could be the end of this year, all being well. Megara have already run some very successful campaigns, so I am hopeful and excited that it will be successful – and hopefully offer up some great rewards for DQ fans. We all love shiny loot right?

Sounds awesome. How can readers stay up to date with the latest news?
The news section of the DestinyQuest website is the best place to check - http://www.destiny-quest.com/news/ - as well as my Twitter and Facebook pages (you can find the links at the bottom of this page - http://www.destiny-quest.com/buy/ ). As the book progresses I will be posting regular updates as well as some sneak peeks at the new paths/careers and build mechanics. Exciting times ahead folks!