April A to Z - C is for Crypt of the Vampire (and other things) - an interview with David Walters. 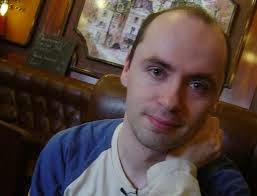 Good day to you April A to Z ladies and gentlemen! Here, we have a treat today. We have David Walters, author of many wonderful books with a Far Eastern flavour as well as the excellent gamebooks Ninja!, the prequel to the Way of the Tiger series and Rederrmer!, book 7 of the Way of the Tiger series. Today, he tells us about himself and his work...

For those of us who don't konw, tell us about yourself.
I'm an author living in Edinburgh who has written a bunch of novels and a couple of game books in the Way of the Tiger series. In total I've got 9 published works at the moment, and a few more on the way! I tend towards far eastern themes, and my best selling books have been those in the Samurai's Apprentice series.
>
How is the Orb RPG going?
>
The RPG book is fully written, it just needs a bit of final editing. I'm awaiting the layout to be finished with the artwork before that editing takes places. It is a brilliant sourcebook for all things Orb, pulling in references as early as Talisman of Death, and contains a lot of the people, places and events that make up that world. Plus you can make your player character a ninja, what could be better than that? Well maybe a monk of Kwon or a Templar of Time, the choice is yours.

Orb is a rich world with tons of potential for exploration. Is there a chance for any more Orb based products?
>
This depends on demand from the RPG, but there are certainly a lot of places to explore in more depth, and more character classes and adventures to add.

What is your favourite part of Orb?
>
The city of Irsmuncast is a great setting, with all its conflicts, religious tension and great characters. And the fact it is right next to the Rift...

You are currently working on Crypt of the Vampire. How is that going?
>
It is going fang-tastic (sorry). I'm adding a hundred sections to build on the atmosphere and setting that Dave Morris created, and it's an interesting challenge to blend it in. There are no ninja in this book though, although when you think about it wouldn't a vampire be a tremendously stealthy character? Dave Morris was channeling the Hammer horror vibe, so I'm tapping into that.

Will there be a chance that other books will get a rewrite and an upgrade?
>
I think Crypt of the Vampire was a bit short compared with the other books, so that is why it is being expanded with new colour artwork created too by the original artist Leo Hartas.  I'm sure the other books may get a little polish prior to release, but I'm not involved in that.

Someone has made a whole blog where they are playing through the WOTT series. How does that make you feel?
>
I'm gutted as they skipped book 0! No, as a fan of the books I'm always happy to see others enjoy the series as much as I do. Also I'm interested to see how many times they die in book 7.

You have done several martial arts themed novels. How are they going?
>
My novels continue to sell well, although I need to get back to completing my Samurai's Apprentice series.

What new novel based releases can we expect later on?

The next Samurai's Apprentice novel is out later this year. I've got some other work in the pipeline, including a new novel series, but it may have to be next year before I get to that. This year I'm hoping to release the Orb RPG, Samurai's Apprentice 5 and my addition to Crypt of the Vampire, which is more than enough to be getting on with. Plus I'm still hopeful of getting the interactive story Canticle of the Demon at least written so it can become an app. Sleep is for the weak!
Posted by Stuart Lloyd at 6:52 AM