April A to Z - F is for Will Fincher


Good day to lovely reader! Today, we have Will Fincher, author and illustrator of the wonderful Maelorum gamebook.
He is currently writing volume 2, which is set to be just as awesome if not more so and today, we have Will who is here to tell us more about himself and his work.

I've always had a powerful imagination. In my childhood I did a lot of reading and drawing, and spent a lot of time outdoors. My family was poor, and moved around a lot, so I think that's why I got into games, and writing and creating my own. I started making games when I was in 8th grade, and made a board game adaptation for "Journey to the Center of the Earth" by Jules Verne as a school project. Even back then, I was thinking of all the books and films that could be adapted from into games, or how much money companies could make if they just used their IP in more creative ways. Most of my ideas from the 90's have become billion dollar industries, so I guess they figured it out! When I discovered role-playing, it was through fantasy books. The Dragonlance series, the Hobbit, and Lonewolf were early examples. It all branched out from there, and I've enjoyed writing and illustrating, and game design ever since.

At home, I struggle with the work / life balance like everyone else. I'm still relatively new at being a Father, which as wonderful as it is, I think is very difficult to any creative person. It really does bring things into opposition to one another. For instance, the interests of my Wife and Child and my creative work are diametrically opposed to each other, and I have to really work hard to find a balance to it all. I don't think people understand how hard it is for a Parent to have a creative life, to actively work at finding time to better themselves in a craft like writing or illustrating (in my case both), or what a person has to go through to write a book length story with all the distractions of modern day on top of it all. Even just trying to write this, I had to stop and make my kid three meals, snacks, and get up at least twelve times to see what he why he was tugging on my arm. So then this is the crux of my work as a creative, to bring my ideas to life one day at a time.
Maelorum volume 1 is a great gamebook with awesome illustrations, a choice of characters and an excellent combat system. What kind of story are we to expect in Maelorum volume 2?


First off, I'd like to thank you and everyone else who has been supportive of Maelorum. It's hard to believe I'm on Volume Two, but here we are. So one concept I had for Volume One and Two, which came early on, is to have the first book pay homage to dungeon-crawling and classic fantasy, while the second would take that world-building and let people explore openly in the next book. Volume Two I hope will fulfill the idea of exploring in a more open way as opposed to a linear path. It's a very dark story with a possibility of hope, which mainly explores why good people turn bad, or vice-versa.

Will Maelorum volume 2 continue with the same characters as volume 1?

It is a direct continuation from Volume One. Most of the characters are returning, although how they have changed I think will be a surprise to many.

You have released some updates for backers with some lovely drawings. Is there anything you can reveal here about volume 2?

I am ready to reveal something new for the Maelorum fans. I've used a two-page spread for my monster encounters, which fits a lot of information in a graphical way like a video game. In Volume Two, there are even more creatures and people who you'll battle, and I've managed to fit some smaller encounters into a single page. Here is an example: 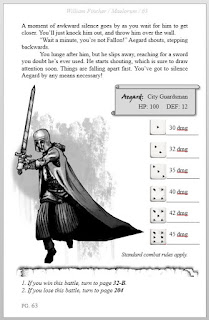 In one of the updates it seems that the hero can be of highborn or lowborn lineage. Do you want to tell us about the characteristics the hero can have?

Good question! The lineage feature basically acts as a switch, diverting the player to storyline that is only meant for him or her. So your background, while briefly described in the first book, now becomes a crucial part of this story as you return home and confront a city much changed from when you left it. Having one character born from the upper class, and one from the lower class, makes it very interesting to write and explore this world. So think of a person from noble birth, being forced to fit in with the riffraff, trying to get back into good graces, and this is where you'll find yourself in Volume Two.

Maelorum volume 2 was planned to be the last book in the story. Do you have any other gamebooks planned, either in the world of Maelorum or elsewhere?


I still plan to have Volume Two conclude the Maelorum series, but I may release smaller booklets or expansions from time to time. Some day I might discover a compelling story and have the creative stamina to produce a third book, so I won't rule it out. However, yes I have many projects and stories waiting in the wings for Maelorum to conclude. I have had some interesting ideas for new original Gamebooks, but for now I think after Volume Two I will take a break from it.

The books come with cards. Do you plan on making any other Maelorum merchandise?

Yes I have expansion cards, which a lot of people were skeptical about at first. I think they've come around, because it's a neat way to bring replay value to the readers. But on top of cards, I also have maps, bookmarks, dice, variant covers, and more so I am limited only by funding!


Back in 2014, you were also working on a video game. How is that going?
I had a really great concept for a video game that I was holding onto for a long time. I pitched the concept, and it was very well received, and was in pre-production for about a year. Since that time, the developer was forced to abandon it due to larger contractual obligations for AAA titles. So it was hard to see that postponed after all the excitement of seeing it start to come to life, but these things happen! The good news is that the project has evolved into a new format, which if successful, will open the door back up to the video game version.


Do you have any other projects in the pipeline?

I have too many projects lined up! It's going to be hard to decide what I do after Maelorum. I have three or four unfinished novels, any of which could also become graphic novels. I have a board game idea, and a card game which will launch later this year with the help of a partner. I'm very excited to show what else I have to offer, and I think people will be surprised by the range of material, everything from the supernatural, to political satire! Thanks again for this interview, and for all the support I've received from the gamebook community!
Posted by Stuart Lloyd at 12:00 AM