April A to Z - V is for Very nice of Michael J. Ward to pop by 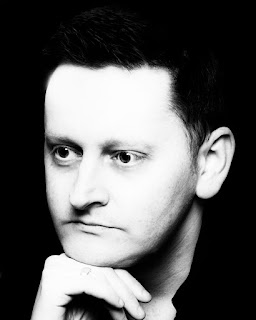 Good day to you, lovely readers. Today we have Michael J. ward, writer of the Destiny Quest series, gamebooks that follow epic stories that span huge countries. The scope of the gamebooks is huge in every way. They are like Game of Thrones for gamebooks (Gamebook of Thrones?).

Today, he tells us about himself, the series and what else he's been up to.

For the first time readers, please tell us about you and your writing.

I’m Michael J. Ward and I had the mad idea of meshing my love of computer RPGs with the traditional gamebook, and came up with DestinyQuest. Currently there are three titles in the series – The Legion of Shadow, The Heart of Fire, and The Eye of Winter’s Fury. You can find out more about the series and how to play at the official site: www.destiny-quest.com
Destiny Quest has been translated into German. How is it doing? Any more languages for Destiny Quest?
The first book has now been translated into French, Spanish and German – with the German translation being the most recent and successful. My German publisher, Mantikore, who also publish the translations of the Lone Wolf series, has now also taken on the second book to translate. I’m not sure what the release date of that will be, but likely to be end of this year or beginning of the next. I’ve been invited to Germany in August to attend my publisher’s self-run convention, where I will be meeting fans and signing books – so I’m sure that will be a lot of fun! 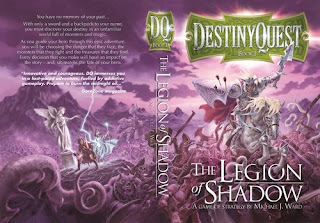 There's a very active DestinyQuest community. Have they influenced any future plans for the series?
It’s always hard to gauge the exact size of a fan community, but I am certainly flattered by those passionate members who continue to engage with the forums or initiate their own DQ projects, such as the recent YouTube series, PageFlippers by Victory Condition Gaming. I wouldn’t say the community has necessarily influenced any plans, but I am conscious that a Book Four is sorely needed and I do feel peoples’ frustration that I can’t provide that at the present time.

After book 3, the series was discontinued, but you have hinted that there still might be a book 4. Is there anything else you can talk about now?
I do really want to do a Book Four and, while I can’t really say too much at this time, there is a company very interested in taking on Heart of Fire and Winter’s Fury to develop as apps, and also continue the series with more adventures. Things were close to getting signed at the end of last year, but sadly there were complications with funding and clashes with other projects, so while I am assured there is still a very positive chance it will all be happening, I don’t have a timeline to share at the present time. If it does go ahead, then it would offer a fantastic future for the DQ series.
Have you started planning a Book Four and can you share any of your new ideas with us?

I have a very rough plot sketched out and an idea of the maps that would make up the two zones. Book Four has a desert theme, as I think many have guessed, and would bring in a lot of characters that will be familiar to fans of the previous books. I’ve also planned up the careers – and taken a different approach to developing the abilities in the game. In Book Four there will be much more focus on specific build-types, so each path (warrior, mage, rogue) will have two different builds that readers can specialize in – so, choosing abilities that really mesh well together and are focused around a single concept.

To give two examples, one of the warrior builds is built around the damage you have taken and the damage inflicted to opponents. It plays very much as a berserker, where you want to be potentially stacking abilities that trigger when your health is at a certain point. On the other side of the coin is the full on tank build, which uses your armour value to do interesting effects and combos. Players can choose to mix and match from the warrior ability pool as they gain items, or they can choose those abilities that focus them in one of those two directions. I think it brings a lot more synergy to the abilities and gives readers a more rewarding journey in upgrading and customizing their characters. Like the warrior, the other paths (rogue and mage) offer builds that are really very different in tone, using new mechanics to make each unique.

Someone's being playing your books on Youtube. How are they doing? Is it fun to watch such a detailed read through of one of your books?

Yes, Victory Condition Gaming have been running a playthrough of the first book. It was very flattering to have been approached for the series and it’s been great fun watching Doug and his daughter, Sydney, battle their way through the hordes of monsters. At times it has been nerve-wracking to watch, as I know the first book is the toughest of the three, so I am always on the edge of my seat, worried whether they will get mired in a tough combat that makes them rage quit in anger (!), but I’ve been pleasantly surprised by their progress and their choices – so that has been a huge relief to me! The community have also been incredibly supportive in offering advice and feedback on the rules, so the videos have provided a good learning tool for those who might be new to the series. You can check out the series here: www.youtube.com/playlist?list=PLyswa3tbWAlQDc5DtouD6yeORVVvFiZsx

DestinyQuest was inspired by your love of gaming. What games are you currently playing – both computer and table-top?

I’m currently playing through Dark Souls 3 which, as fans of the series will know, is a punishingly hard experience designed to make you fling your controller across the room, but I really enjoy that challenge and exploring the stunningly crafted world created by From Software. Incidentally, there is a board game conversion currently on Kickstarter, which I urge people to check out and support. It’s quite pricey, but you get a ton of great miniatures and extras.

Talking of kickstarters, I recently backed Zombicide: Black Plague and Arcadia Quest: Inferno. In the last few years I have really rediscovered my love of table-top gaming. There are some really innovative ideas going on in the board game scene right now, more so than I would say computer gaming, so I am always on the look-out for cool new games to pick up. The only problem is storage space – particularly if you go in on a kickstarter and end up with about a gadzillion boxes of extras! Think I may need to build an extension!

Have you ever thought about designing a DestinyQuest board game?

I’ve been playing around with a design for a DQ card game. This is going to sound quite odd I know, but I actually dreamt the game (!). When I woke up I was like, wow that was a really good idea – grabbed my notepad and got scribbling. I’ve not really pursued it as much as I would like, but when I do get a rare moment of inspiration, I’ll add to my pool of ideas. I think it could be something quite cool, but not really sure how I would take it any further really.

Last year, you were also working on some novels. How are they doing?
Slowly, is the word I would use! Most of my time of late has been taken up with freelance writing and editing, to pay the bills and keep my head above water, so I really haven’t had much ‘head-space’ to get back into the writing. I do have two books on the go at the moment (not sure if that is really the most productive approach to getting a book finished!), and while I am making progress, it is very slow. But then, I don’t feel too much pressure to get something out – I’d rather take my time and make sure that what I end up with is something I am proud of and would make a publisher say ‘yes!’.

What do you have planned for next year?

Gosh, I don’t even have plans for the rest of this year so hard to think that far ahead! I guess my future hope is that the Book Four deal comes to fruition because there is nothing else I would rather be doing right now than more DestinyQuest. I would love to return to that world and share more of the story. It feels annoyingly unfinished, with story threads still dangling all over the place, so I don’t think I could find any kind of peace or satisfaction until the series was completed. I have faith, so we’ll see what happens!